Season 6 of LJ Idol is starting, and it's not too late to sign up to compete, for those who are interested. The deadline to sign up is Wednesday, October 14th at 7 pm EDT (Eastern Daylight Time). To sign up, you need to have a Live Journal account. Then you need to post in your Live Journal that you intend to compete and copy the link for that entry into the sign up post. Finally, you need to write an introduction in your Live Journal and then post a link to it under the Topic 0 post. The introductions are due by Wednesday, October 14th at 8pm EDT. A full FAQ is available at this post.

I'm going to ask myself a series of questions and answer them. If you like the exercise, feel free to copy and paste the questions and pair them with your own answers in your blog. 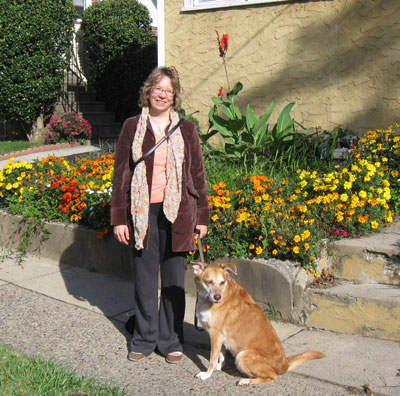 Me and Una on a recent walk, in front of a neighbor's beautiful garden.
This picture was taken by a neighbor, who offered to take one of us
after he saw me taking photos of Una with the flowers.

Where did you grow up, and where do you currently live?

I lived in Central Pennsylvania for most of my life, growing up in a small factory town in a rural area and attending Penn State University for both my bachelor's degree (in Broadcast/Cable) and my master's degree (an MFA in English). Since January 2001, I have lived in suburban Philadelphia. My neighborhood is a diverse mix of working and middle class people from different ethnic backgrounds. I get along well with my neighbors, but it's often noisy outside the windows, which means to take a nap, I have to play my favorite Enya CD, Shepherd Moons.

I enjoy walking my dog on the tree-lined streets that are only a few blocks away from our street full of rowhouses.

My very wonderful husband, The Gryphon, and I just celebrated our second anniversary. We share our home with our doggie, Una, who turns 10 this month, and our kitty, Luke, who is 4.

What do you do for a living?

Currently, I make most of my money through transcribing cable news shows for a company that also does congressional and business transcripts. The company provides transcripts for all the major news networks (CNN, HLN, CNN INTERNATIONAL, MSNBC, CNBC, FOX NEWS, and some ABC, CBS, NBC). I have regular assignments I transcribe every evening, as well as one in the afternoon.

You will very rarely hear me talk about my work for a couple reasons. First, since I tend to keep my entries public, I think it's a bad idea to talk about work in anything but the most general terms. Secondly, I signed a confidentiality agreement, so any of the interesting interviews I get to hear before they air, I'm not permitted to speak about.

It's a decent paying job and gives me the flexibility of working from home and setting my own schedule.

I've also recently begun writing some articles for Associated Content, and I hope to generate some supplementary income that way. You can view my articles at my AC profile page.

I'm also exploring ideas for other freelance articles to send out to various publications. I have completed an interview for a feature on my dog sitter, which I hope to complete soon.

In addition, I'm currently working on two books: one on wedding planning, based on interviews conducted with brides; and the other a book of personal essays and humor, drawn from my online blog (which started at my home page in 2003), as well as newspaper columns, some columns from an online publication, and some unpublished material.

What are your hobbies? What organizations are you involved with?

I am a volunteer for Otakorp, the nonprofit that runs Otakon, one of the largest Japanese anime and culture conventions in North America. This year will be my second as the head of Press Relations.

Since I don't make money from it, I supposed you can consider my lit mag a hobby. I am the co-founder and editor of the online literary quarterly, Wild Violet, founded in October 2001. Currently, I'm working on the fall issue, which should come out in November.

I also enjoy pop culture in its many forms: television, movies, music and the performing arts. A pretty good overview of my interests in pop culture can be found at my MySpace page.

Where do you see yourself in five years?

What do you typically write in your blog? What don't you write about?

When I'm not writing home game entries for LJ Idol, my entries break down like so. Usually, Monday and/or Tuesday, I write about the weekend, which tends to be my most interesting time of the week, when I do something other than walk the dog and work. On Wednesday or Thursday, I usually write the next installment in the Oscar series, for which I'm watching all the movies that won the Oscar for Best Picture. If I have an extra day, I write about observations or other ideas that come to me: sort of a free writing topic. Over the summer, on Thursdays, I was doing the Memory Box series, where I was sharing artifacts from my past, such as elementary-school writing, photographs, and other memorabilia. On Friday, I often do Found Friday, where I share objects that I find while walking my dog. During American Idol, I write detailed show recaps after each episode.

I don't share gossip or violate my friends' trust. Typically, I don't gripe about people I actually know, both because it's rude and because such feelings are usually temporary, so why make a public stink about them? I limit the amount of negativity in general. Also, I generally don't use real names except occasionally in the case of public events, where people are appearing in a professional capacitiy. For a guide to my nicknames, see my Who's Who.

What's the most recent CD you bought and/or listened to?

Bachelor in Paradise, which I found in the thrift store yesterday. I was immediately intrigued by the cover, which features a blonde women with her hair up in a towel and the following warning: "WE WILL NOT BE RESPONSIBLE FOR WHAT THIS ALBUM DOES TO YOUR BACHELOR'S DEN OR YOUR SACROILIAC." The sacroiliac is the joint at the base of the spine. A naughty reference?

Flipping it over, and seeing both a track from Esquivel and the theme song from The Apartment, I was even more interested. But what sealed the deal: the fact that it was produced by Rod McKuen, the mellow '60s poet whose work I read avidly after meeting him at a reading and book signing in Chautauqua, New York, when I was about 12. I credit him for getting me interested in writing free verse poetry.

While some of the tracks were cheesy, it was good cheese. It will also be great for cocktail parties. Definitely worth the six bucks.

What's the last movie you watched?

What's the last book you read?

What's the last dream you can remember clearly?

Last night after finishing work, I fell asleep on the guest bed while petting my cat. I dreamt that all I had to do was look at him a certain way and he'd immediately come up to me. This is, of course, wish fulfillment, as he does nothing of the sort. I just spent a weekend trying to persuade him to say hi to my sister and her husband, but he hid, partly because her dog was freaking him out. I guess I can't blame him, poor kitty. But the staring thing would come in useful, especially for vet visits.

Moral:
Interviewing yourself is more fun than a job interview.