As I gazed at the little plastic wand, a vertical line — indicating a "plus" for positive — formed long before the horizontal line did. The second time I took the test, two days later, I got the same result. With a vertical line that strong, I thought, I am most definitely pregnant. Just as my husband, The Gryphon, and I had hoped. And it had only taken us two months. Go us. 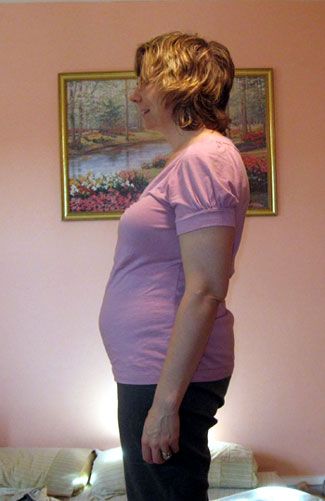 Me at seven weeks

This was on October 1, but when I called my new ob-gyn (my former gynecologist just retired), the receptionist couldn't schedule me until Thursday the 15th. Just to be safe, The Gryphon and I decided not to tell anyone until after the appointment, including my family.

The one exception was my sister, who happened to call me the day I took the first test. Plus, I knew she'd be visiting soon, and I thought that if I refused to drink coffee and alcohol and was rubbing my belly at odd moments (growing pains, apparently), she'd figure it out soon enough anyway. I swore her to secrecy, except for her husband. After all, I knew we couldn't keep it from him for long, either. He'd be visiting, too.

The doctor, an efficient, young, dark-complected woman with a pink breast cancer ribbon on her stethoscope, checking the results of my urine test and said, "Congratulations." Then, she whipped out a circular plastic wheel to calculate my approximate due date of June 4. According to her, I was 6 1/2 weeks pregnant (about 7 weeks now).

I personally believe it might be a little longer than that, mostly because of a dream I had in September that my daughter was already with me. Daughter, you ask? Yes. From puberty, I have dreamt about a dark-haired daughter who, lately, has begun to look like The Gryphon, with the same rectangular face. I will be the most surprised woman in the world if I give birth to a blonde son instead.

So looking back, a number of things I've mentioned in recent weeks probably make more sense to you. The fact that, abruptly on October 1, I stopped my "Camera-Phone Diet" project? Pregnant.

The fact that The Gryphon bought me (maternity) pants and (larger) bras for our second anniversary? Pregnant.

The fact that I mentioned in a Facebook note yesterday that I'd stopped drinking caffeine? Pregnant.

That's also why I couldn't write about the next chapter in the kidney stone saga. I saw my urologist the morning I was to see my ob-gyn. Upon learning of my new condition, and asking me several questions to ascertain that the stone, while causing occasional pain, did not pose an immediate danger, he wrote me a prescription for a pelvis CT scan — in October 2010. You see, we can't risk the radiation while I'm pregnant, especially not in the first trimester. Hopefully, the stone will either stay where it is or pass without incident, because right now treatment options are all but nonexistent, except in the case of emergency. If I experience extreme pain, I'm to report to an emergency room. Otherwise, deal with it. (Not exactly the phrase the doctor used, but that's the essence of it.)

That's OK. I'm used to dealing with chronic pain, thanks to an old Jung Sim Do shoulder injury. I'll get by.

Now, for those who may be wondering, I still intend to follow through with my duties as head of Otakon Press Relations. One of my staffers has expressed an interest in helping with pre-con work, and I have a promise from my sister to help with baby care at the convention.

I also plan to attend Philcon (though I'll have to find some nice maternity outfits for the days I'm on panels) and any of the usual social events we'd normally attend.

In addition, I plan to continue to do my transcription work in the evenings, up until the last moment. Next task, after posting this, will be telling my boss.

I'll close with a couple things I haven't been able to share until now.

That said, I hereby lift all communications bans. You may go forth and spread the good news!

Moral:
Even I can occasionally keep a secret.