I've been in many doctor's offices over the last several months, between having my cholesterol checked and other pre-pregnancy diagnostics recommended by my general practitioner, to dealing with a kidney stone issue that's currently on hold.

None of those visits was as enjoyable as the one my husband, The Gryphon, and I attended yesterday. And certainly, none were as awe-inspiring. It's equally fair to say none of them moved me to tears. 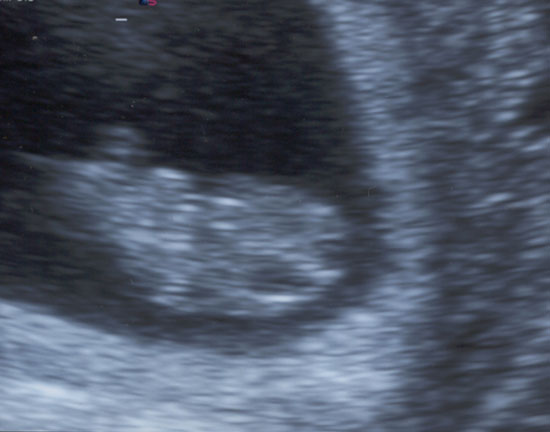 Our little bundle of joy. The head is towards the right, and the arm buds in the center.
(Click to enlarge)

The Gryphon got permission to arrive late at work and accompanied me to the morning ultrasound appointment.

After checking in, we waited our turn in a colorful room lined with alphabet letters and butterflies. Then a nurse called my name and escorted me into a room where a technician was waiting.

Since I'd had an ultrasound recently, to diagnose my kidney stone, I knew what to expect in terms of the procedure. I didn't, however, expect that they would have warmed the gel, which was a nice surprise. The pressure on my belly was a little uncomfortable, especially since I'd followed directions and drunk 16 ounces of water before the appointment. Soon, however, what we saw would take my mind off any discomfort.

As she moved the wand, the technician explained what we were seeing, which organs were flickering across the monitor. And then, inside a dark sac, the unmistakable humanoid shape we'd been hoping to see. The technician pointed out that the head was on the right-hand side, and it looked very large compared to the rest of the developing body, partially because it was closer to the wand than the feet. She pointed out the little arm buds, the first stages of growing limbs. I thought I could see them moving, but The Gryphon later suggested they might just be floating in the amniotic fluid, due to the movement of the ultrasound wand.

The technician pointed to a brightly flashing pulse in the chest area. "That's the heartbeat," she told me, and let me know it was beating at a normal rate. Immediately, I started laughing out of sheer joy, and a lone tear ran down my cheek. "We like happy tears," she told me.

According to her measurements, she estimated that I was nine weeks along, which is about four days longer than my ob-gyn had estimated. It does not, however, change the June 4 due date. Interestingly, though, it does confirm that the dream I had in late August was prophetic. When I dreamt about my child, the dark-haired girl I've seen in dreams since puberty, a voice told me, "She's already with you." Of course, we've got to wait until the second trimester ultrasound to determine if I'm right about the gender.

The Gryphon squeezed my hand throughout the process, and we listened raptly to all the information the technician, and then a doctor, gave us. Everything looked good so far, according to them. The technician gave us two photos, and The Gryphon eagerly asked for one so that he could show it off at work. I was happy he was so enthusiastic about it. Reminds me of when we were first dating and he wanted my permission to tell the whole world we were a couple. I made him wait until I got a chance to tell my old friends myself.

We also found our way to the other side of the hospital for blood to be drawn for several screening tests. I expect I'll get those results when I attend my next ob-gyn appointment in a couple weeks.

Such was the power of seeing that fiercely beating, independent heart that, even as the needle went in, I could not stop smiling.

Moral:
Never underestimate the power of a grainy, black-and-white image.