This is my home game entry for The Real LJ Idol. I am not competing this season but invite you to read the many fine submissions here. Topic number 2 is "Uphill, both ways, barefoot." 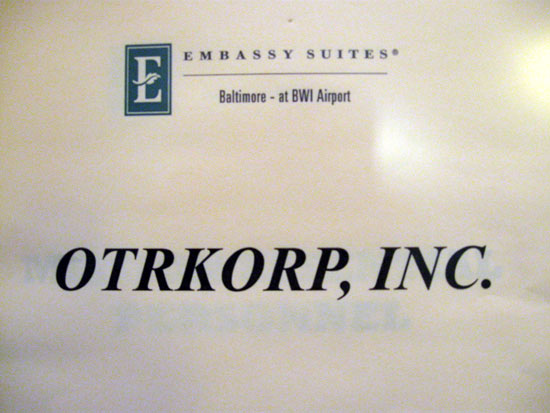 This sign, reading "OTRKORP" instead of "OTAKORP,"
hung outside the recent Otakon planning meeting.
In my day, hotels proofread signs.

In college, my friends in the Penn State Monty Python Society often got into silly conversations, based on the famous Monty Python sketch, "The Four Yorkshiremen." In it, four men sit around a vacation resort, reminiscing about how hard they had it when they were young.

Our conversations would usually start when somebody had complained about something. Then, either that person or someone nearby would start, "In my day..." following it up with a ridiculous assertion about how much worse it had been.

For example, somebody might have just complained about the fact that the mainframe was down (in my day, our e-mail accounts were all accessed through the massive room-sized computer, PSUVM). Somebody else would say, "In my day, we didn't have mainframe accounts. We had to write our message out on punch cards and run them through the computer by hand."

"Luxury! We didn't have punch cards! We had to convert our thoughts into ones and zeroes and send smoke signals from the roof of Boucke Building (one of the buildings that housed computer labs on campus). A sys op on the roof of the Computer Building had to translate the message back into English and deliver it by hand to the recipient."

"We dreamed about smoke signals! We had to use a chisel to carve our messages onto rocks. Then we had to carry them on our backs across campus and fling them at the recipient's head, knocking them unconscious."

"Rocks would have been a blessing. We had to track the recipient down, hogtie them, and brand our message into their backs. I still have the scars from the Great Chain Letter Pogrom of '82."

By this time, whatever the original person had complained about was a distant memory, as everybody tried to top each other's ridiculous statements. It was a great form of stress relief.

Fast forward (mumble) years. I was traveling with some friends to an Otakon meeting, and the conversation turned to the current state of anime fandom.

"No wonder the major anime studios are failing. Nobody buys anything anymore. They get what they want free from pirate sites."

"Everybody expects instantaneous rewards. They complain if a release is delayed for a couple days, but back in the day, you were lucky to get a shaky second-generation aircheck of a show, still in the original Japanese."

"We didn't have fancy DVDs with different subtitle options. You had a poorly translated subtitled verson, done by a fan with freshman-level Japanese."

"In the really early days, we had to have somebody sit near the screen with a script and read the English translation of the dialogue."

Here's the thing, though. This wasn't a silly conversaton. This was entirely real. I almost chimed in with "In my day..." following it with a ridiculous statement, but realized I'd probably be tossed out of the car.

Yes, it had finally happened. We had become the Four Yorkshiremen.

Moral:
In my day, we only pretended to be grumpy old men.