On Saturday, The Gryphon and I attended two Halloween parties. I went as Astrid Moon, a "spiritual advisor," a costume created from items I already had in my clost, featuring a floor-length blue caftan I bought in my hippie days.

Any other year, I would have had fun staying in character — offering half-baked advice or telling people their auras were really pretty — but this year, as soon as I walked in the door, people were congratulating me on my pregnancy and wanting to talk about it. Therefore, Astrid fell by the wayside. 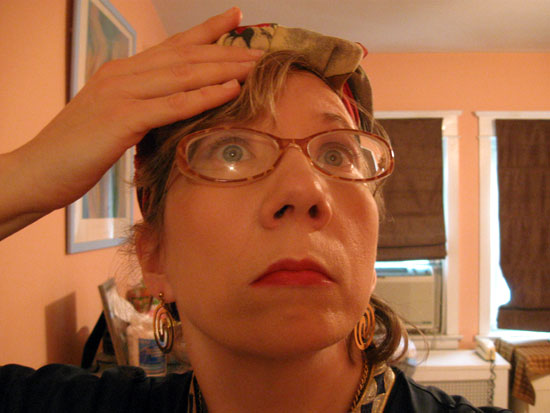 Me as Astrid Moon, getting a vision.

The first party we attended was hosted by The Martial Artist and The Book Lover. That started in the afternoon, and we arrived about 3 or 3:30. In addition to The Gryphon and I, the guests included The White Rabbit; The Cheshire Cat and his wife, The Paper; My College Roommate; The Court Wizard; The March Hare; The Dormouse; The Cousin and her youngest daughter plus a friend; Pimp Daddy; The Genealogist; The Devil's Advocate; My College Roommate's Ex-Husband; and right before we left, The Paralegal. 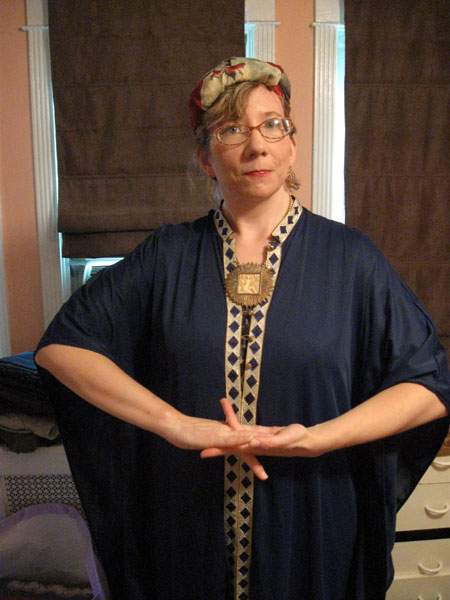 Me as Astrid Moon, a spiritual advisor

After a short period of chatting, food was served. The Gryphon and I had brought chicken tapas along with a potato salad made without mayonnaise. In addition, there were tacos, burritos, sweet bean paste-filled buns, chocolate pretzels, a chocolate cake, an apple pie, and various kinds of alcoholic and non-alcoholic drinks. I stuck to water, labeling my cup "Astrid Moon," in part to remind myself of my character's name (I'd blanked on it upon arriving, though I'd planned this costume for weeks). I guess I got a case of the pregnancy stupids.

I drifted from room to room, participating in conversations. One of the best was about anime: both what people are currently watching and then recommendations of anime suitable for children. 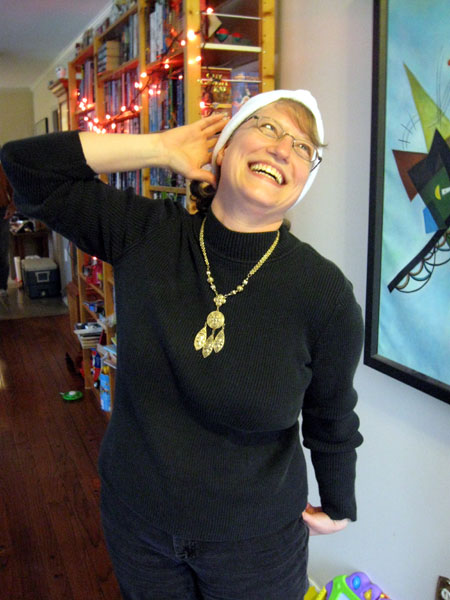 My College Roommate as a 1940s Hollywood Starlet. 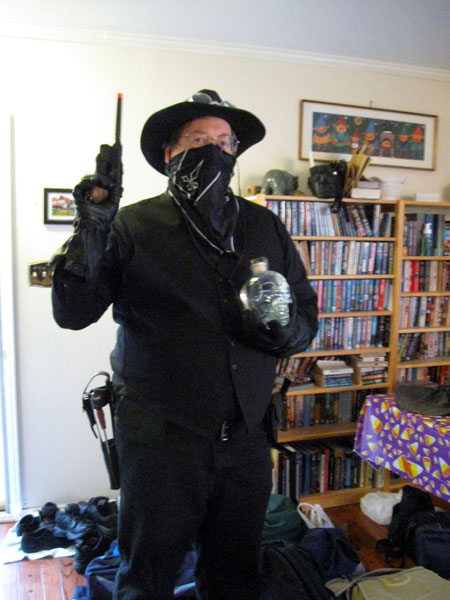 The March Hare as a steam punk cowboy. 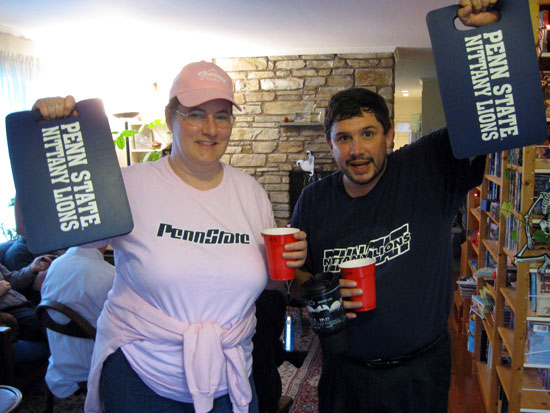 The Genealogist and Pimp Daddy as Penn State fans. 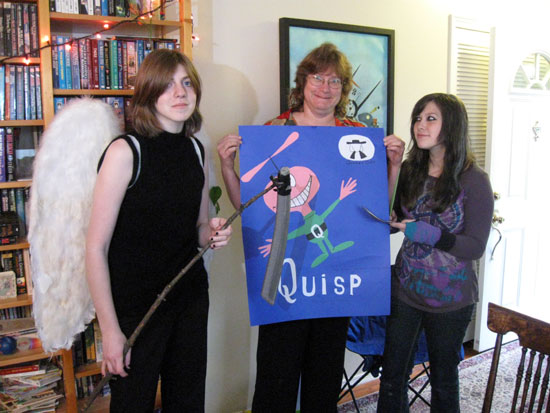 Here we have, from left, The Cousin's daughter as the Angel of Death;
The Cousin as a box of cereal, and her daughter's friend as a cereal killer.

Later, I joined The Martial Artist in playing with his young son, which led to a conversation with him and The Book Lover, as well as The Genealogist, My College Roommate's Ex, and a couple other people, about raising babies. I wrote down a couple tips: the crib that The Martial Artist and The Book Lover recommend, as well as a book they said gives all the basics on what you do and don't need for a baby. 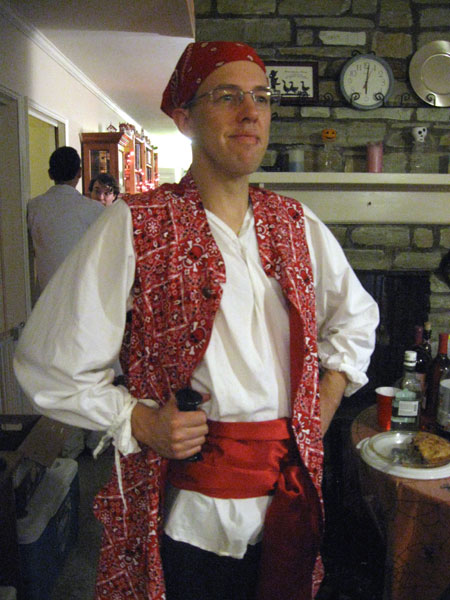 Our host, The Martial Artist, as a pirate. 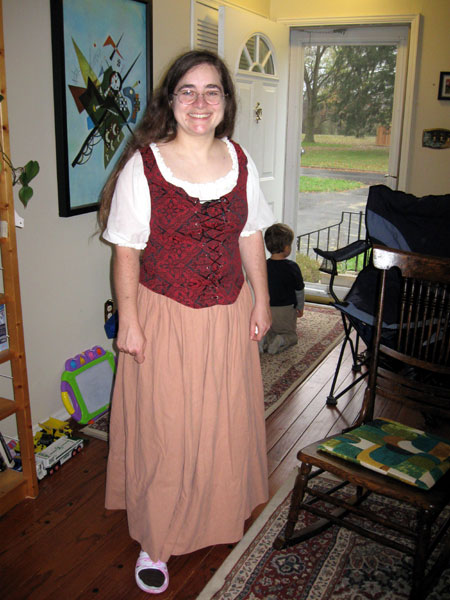 Our hostess, The Book Lover, dressed as a Renaissance woman. 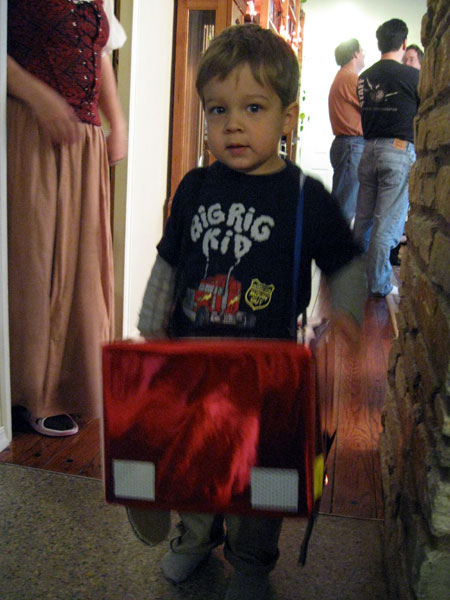 The son of The Martial Artist and The Book Lover
was dressed as a truck for Halloween.

Our host and hostess were wearing Victorian-style "steam punk" dresses, sewn by The Seamstress, of course. She'd really outdone herself. They looked not just like costumes but like real clothing. 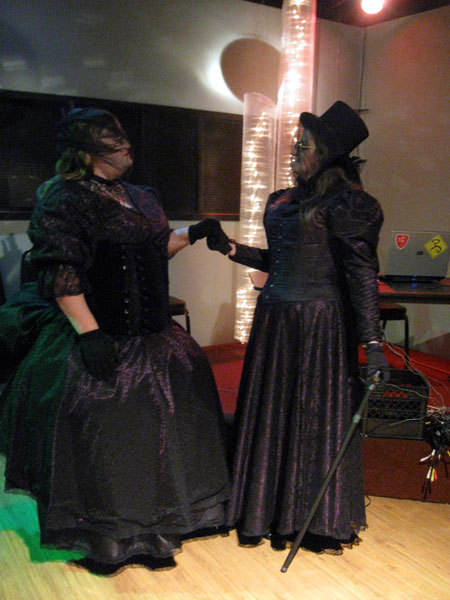 The Horror Film Buff and The Seamstress in their fabulous
deep purple and black steam-punk Victorian outfits.

Many other great costumes were at this ball, as well, since the guests are primarily SF folk and love dressing up. 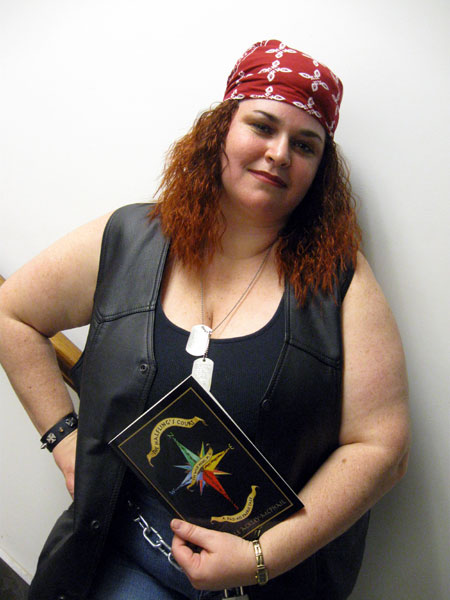 The Anthology Editor as a tough biker chick.
She's holding her latest book, which inspired this look. 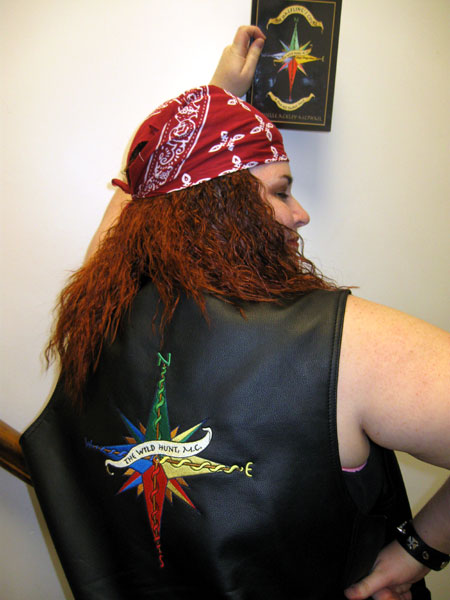 The back of The Anthology Editor's vest is embroidered
with the insignia on the cover of her most recent book. 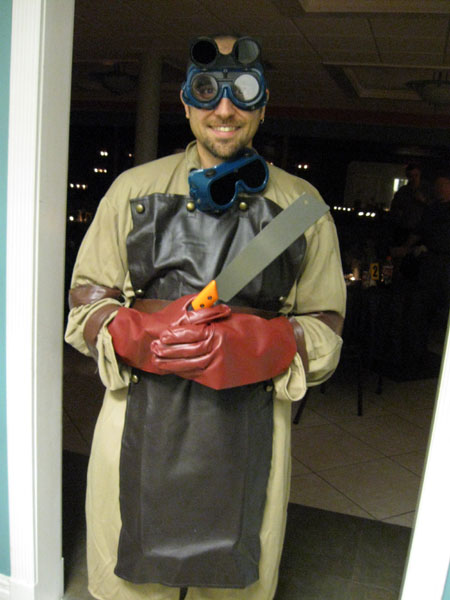 The Showboater as an unsavory character I wouldn't want to meet in a dark alley,
complete with knife, rubber apron and gloves, and goggles. 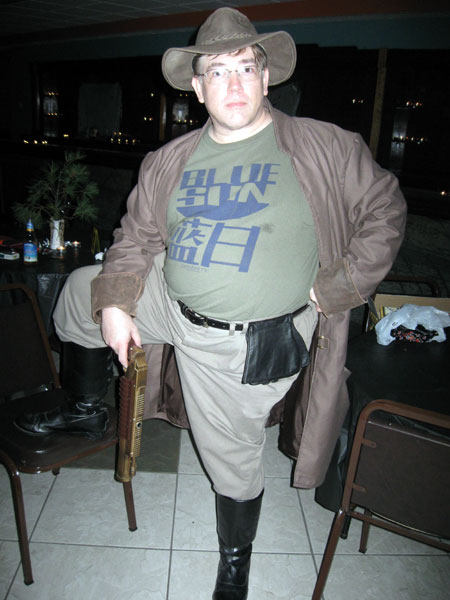 The Filmmaker dressed as a Browncoat from "Firefly."

Among the guests were The Filmmaker; The Anthology Editor and her husband, The Military SF Author; The Goth Grrl; Titanium Junky and her husband; DJ Rock and his girlfriend (whom I met for the first time); The Showboater and his wife; The Green Man and his fiancee, The Linguist; and several other people I recognized from similar parties.

Typically, this party tends to be a bit boisterous, with guests getting silly on the dance floor. This time, however, many eyes were glued to the World Series game between the Phillies and the Yankees. At first, those guests were off in another room watching a TV, but then DJ Rock set up a video projector in the main party room, projecting the game onto the wall.

The only dancing that really happened while I was there was me and The Anthology Editor for a song or two. She took her long, red wig off at one point and plopped it on my head, where it added immeasurably to my costume. 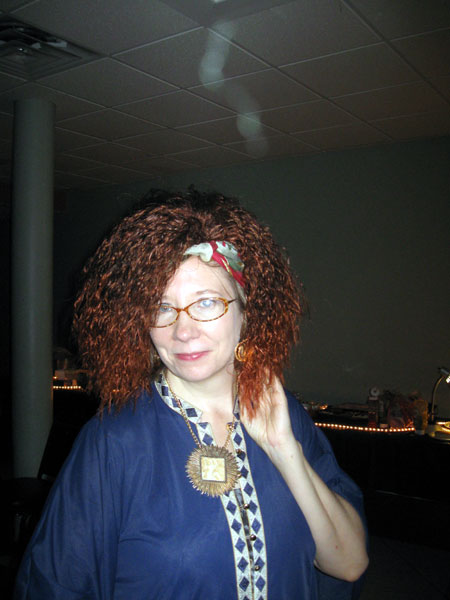 With the red wig, I look even more like a spiritual adviser.
A wispy light (a spirit?) floats over my head.

The Horror Film Buff was acting as the DJ but couldn't even get the guests to dance to "The Time Warp" from The Rocky Horror Picture Show. I walked over and said, "Can you believe they're not dancing to this?" The Linguist, The Horror Film Buff and I got into a conversation, first about the fabulous Victorian costumes and how The Linguist wants to wear something similar for her wedding next year. Then we talked about current horror films, namely Paranormal Activity, which is supposed to be quite good.

By then, The Gryphon was starting to fade, and he suggested we leave before the game ended so we didn't run into too much game traffic. This was partly a necessity: my car had been overheating that day, probably because something got messed up when I had it in for an inspection and oil change last week. 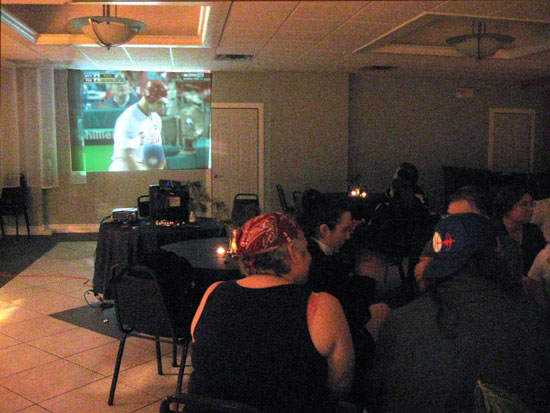 Guests watch the World Series game, projected on the wall.

The game was still only in about the 6th or 7th inning when we left. This meant we never got to see The Browncoat, who was at the game and had told me she'd be coming to the party later, as a Phillies fan. Oh, well. There's always Philcon!

Moral:
It's hard to stay in character when people want to talk about your real life.

If anyone would like the original-sized photo of themselves, just let me know and I'll e-mail it to you.