When my friend Attila the Pun e-mailed me after I made my pregnancy announcement, I realized I hadn't seen him and his wife since The Gryphon and I got married, two years ago.

So I suggested we get together, and The Gryphon agreed to attend a breast cancer fundraiser with Attila and his wife on Saturday. We met them at their house and drove up together, arriving just as the event was getting started. 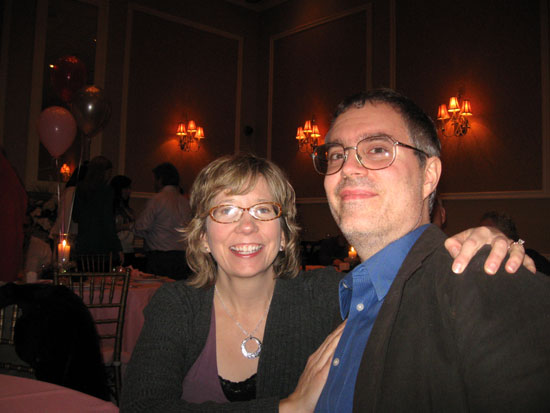 Me and The Gryphon at the table

We purchased tickets for the silent auction and stuck our tickets in a few bags that looked interesting, including a Beatles-themed prize.

The theme for the evening, of course, was pink, the coordinators bopping around in pink feather boas and, in one case, a pink, glittery cowboy (cowgirl?) hat. We got drinks at the cash bar: I had a cranberry juice with a little club soda.

Attila and his wife introduced us to their friends, one of whom I liked immediately. She reminded me of Gilda Radner, one of my favorite female comedians of all time: with a similar face, down to the little laugh lines, and a gentle, musical voice. The main difference was that her hair was long, chestnut brown and straight, unlike the dark, curly hair that Gilda sported.

Gilda, as I'll call her, is a personal chef as well as a personal trainer, for both The Gryphon and I exchanged some interesting conversations with her.

As it got closer for dinner to be served, we sat at our table, reserved under Attila's surname. Dinner was a buffet that included a salad, meatballs and bread (which both The Gryphon and I used to make mini-meatball subs), pasta with squash and carrots, potato salad, and potato chips. I skipped the potato dishes but tried everything else. It had been a long time since I ate meatballs, and I enjoyed them.

At the table, I had a long conversatio nwith Gilda about pregnancy and baby names. She told me that, because she stayed physically active, she believes it helped her during her labor. Hers was only four hours, while a friend's was 22, she told me.

The real fun began when the band, Shabby Road, started to play. Attila and his wife had seen them perform once at the World Cafe. 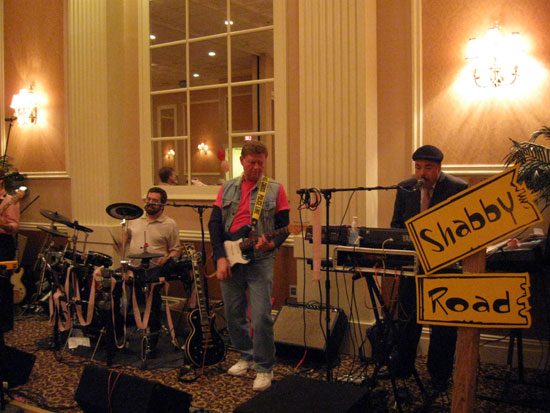 A bunch of us got up and danced: Attila and his sister, me, Gilda, and a slender woman with short silver hair, wearing a long, pink halter dress. She was an amazing dancer, full of joy, and lots of fun. Occasionally, she interacted with the band's lead singer, which was hilarious. 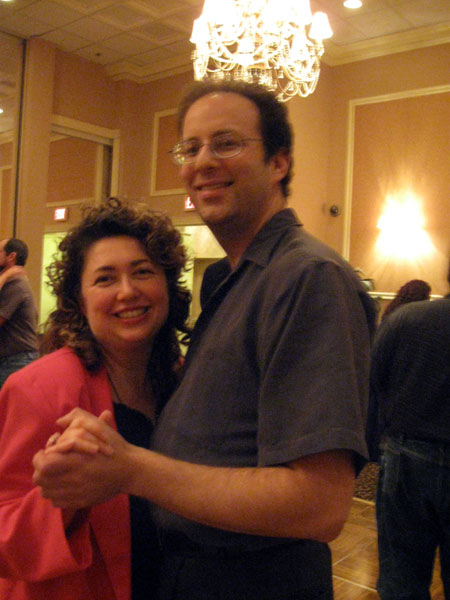 Attila the Pun and his wife dance a slow dance.

Since you had me and Attila on the floor at the same time, we were feeding off each other's silly moves, cracking each other up. I noticed, glancing around the room, a number of people were watching us with broad smiles across their faces. That's what it's all about.

Considering it was such a serious occasion, we had a lot of fun. It was good to spend time once more with an old friend. His wife told me that Attila and I bring out each other's silliness. "You mean, he's not like this all the time?" I asked, then adding internally, "Well, he has been as long as I've known him." Hmm. Maybe she's right!

Moral:
Dancing brings out my silliness.