This weekend, my husband, The Gryphon, and I attended a regular Otakon meeting on Saturday and an Otakon planning session Sunday. They were both held at a hotel in Philadelphia, which made it extremely convenient for us. 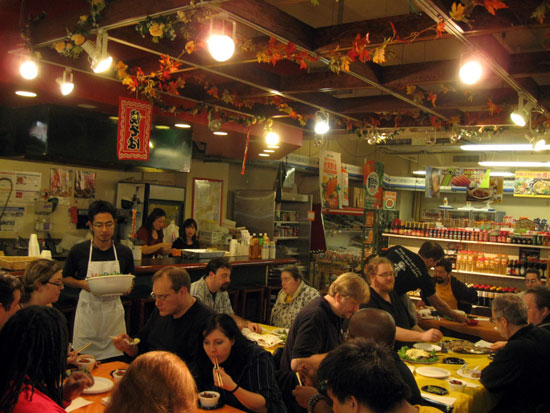 The Otakon Board of Directors dine
at Maido! Japanese grocery in Narbeth.

The Saturday meeting was, I believe, better attended than the one held the month before. It was a typical general meeting, preceded by a board of directors meeting. We were still wrapping up a few items from last year, plus beginning to talk about ideas for next year, including the budget.

I also shared with The Godfather, the head of Guest Relations and my immediate superior, my thoughts for how I'm running Press Relations next year, considering I'll have a newborn infant by then. It helps immensely that my sister has committed to coming with us and helping with baby care. The Godfather shared his ideas with me for a 2010 marketing plan.

After the meeting the board of directors (and significant others) went to dinner. The Guest Handler had arranged a bus to pick up the group and whisk them to Maido! Japanese marketplace in Narbeth, just outside Philly. They sell groceries, gift items and also have a food counter. They set up tables just for us and served us family style, bringing out a number of different dishes to try. It was, as one person observed, like sitting at a chef's table. 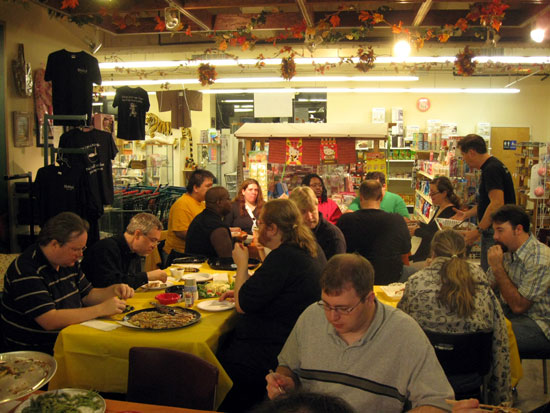 Another view of the board of directors,
showing the gift section of the store.

The next day was more informal, with several committees meeting to discuss such important topics as staff disciplinary procedures and staff benefits, in addition to an unscheduled topic: possible changes to how we handle badging and registration.

By 3 p.m., when the meeting ended, I was really hungry, not having had any lunch except for two donuts, left over from the morning sessions. The Gryphon and I ate at an Indian buffet near 40th Street, New Delhi [SITE HAS MUSIC] where we've gone in the past. The food really hit the spot, especially the naan (a flat type of bread). Afterwards, we walked a few blocks for gelato at Capogiro. I had a scoop of chocolate hazelnut with a scoop of orange and cardamom. It was a great combination. It was actually warm enough for us to sit outside at the tables and enjoy our treat.

Back home, we watched Ice Age 3. It was fun to see all our favorite characters together again and to meet a new one, a slightly mad adventurer weasel named Buck, voiced by Simon Pegg. So even though it was a working weekend, we spent a little time just relaxing.