Battle of the Network Stars

I'll write more about the rest of Saturday later, but first let me give you a blow-by-blow recount of my first panel, "Vs." This is where the audience gives the panel suggestions for pairings of either fictional or real people (or non-people) who would battle it out. The panel makes arguments for who would win. 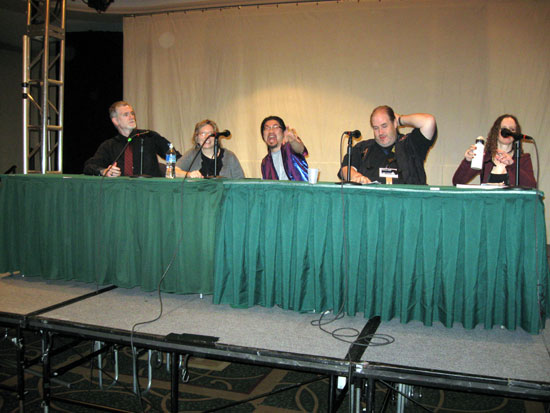 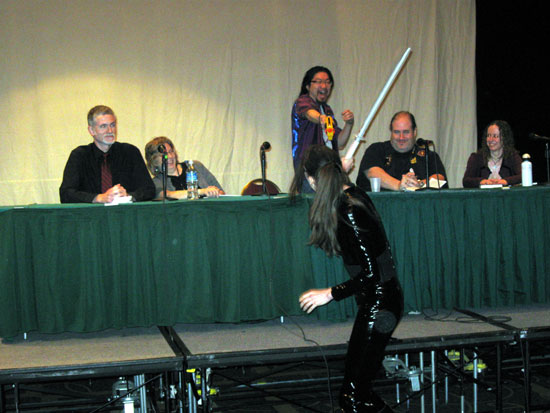 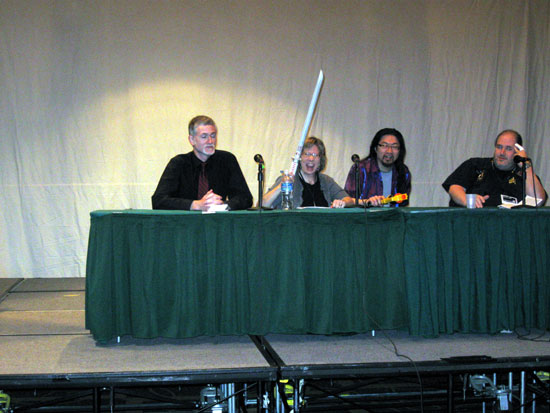 (from left) Andrew Ely, Alyce Wilson, Frank Wu, The Horror Film Buff.
I claim the foam sword after the battle of the Wus.

The audience comes up with the combatants, and the panelists figure out who would win. Forget Alien vs. Predator... how about Bugs Bunny vs. Doctor Doom!

Frank was the last one to arrive, after we'd already done our mic checks. As he walked up the aisle, I told him that he'd scared the living daylights out of me the other day by rushing into a panel with his light saber. He sat down next to me, and his wife, Brianna, ran up at the beginning of the panel and battled him. This time, she had a foam sword and he had a Nerf gun.

The Horror Film Buff was supposed to be the moderator, but Frank took over. It was his idea to come up with brackets, so that we could have a tournament. Some suggestions came from the panel members and some from the audience. As each pairing was announced, we'd argue on who should win. They were as follows:

Reagan versus Gorbachev: Based on the scar on Gorbie's forehead, we reasoned that he was Harry Potter in disguise and Reagan was really Voldemort. Therefore, Gorbie wins.

Bob Barker versus William Shatner: Despite his age, Bob Barker is resourceful. He could use his various props from The Price is Right as weapons. Also, the animals would fight on his side. Bob Barker wins.

Picard versus Kirk: Though it might seem a fairly even battle, Kirk would stun Picard with his bad acting and then knock him down. Kirk wins.

Greedo versus Han Solo: It doesn't matter who shot first. Han Solo wins. I argued for the cantina musicians, whom no one is watching and therefore would have the jump on both.

Roger Moore's James Bond versus Sean Connery's James Bond: Sean Connery wins primarily based on the coolness factor. After all, he can unzip a wet suit and have a dry suit underneath.

Angelina Jolie versus Jennifer Aniston: Not only can Angelina Jolie handle weapons (or at least prop ones), but her lips could be used as a weapon. Angelina wins.

Jeannie of I Dream of Jeannie versus Samantha Stevens of Bewitched: By the time Jeannie would have finished putting her arms together and nodding her head, Samantha would have already twitched her nose and sent her packing. Samantha wins.

Dick York's Darin from Bewitched versus Dick Sargent's Darin: Since Dick York had a bad back, which caused him to lead the show, Dick Sargent would clearly win.

Pikachu of Pokemon versus Stitch of Lilo & Stitch: Pikachu's only defense is to say his own name and jolt people. Stitch eats nails. He could swallow Pikachu, and then burp electric clouds. Plus, Disney always wins. Match goes to Stitch.

Lestat of Anne Rice's Vampire Chronicles versus Edward of the Twilight series: At this point, the "voice of God," i.e. the sound tech, spoke into his mic and said, "Vampires do not sparkle." They do not. Lestat wins.

All of the Kzinti from the Kzinti Wars series versus Aslan of the Narnia series: Even with the Kzinti combining forces, they could not win against the combined forces of magical creatures and humans fighting on behalf of Aslan. Plus, if you kill Aslan, he just comes back. Aslan wins.

Lestat versus Gorbachev: Since Gorbie is, of course, STILL Harry Potter, he would win. Plus, he has nukes.

Bob Barker versus Han Solo: Bob Barker still has all the animals on his side, whereas Han Solo only has Chewbacca. Bob Barker wins.

Angelina Jolie versus Aslan: Angelina would cut Aslan in half with her lips and bury the halves in separte areas so that Aslan cannot regenerate. Angelina wins.

Samantha Stevens versus Stitch: Since she's used to magical things going awry, Stitch's antics would not upset her. Plus, if she needs help, she has her witchy mother, whereas Stitch only has Lilo. Samantha wins.

Dick Sargent versus Kirk: It doesn't even matter which Kirk he's fighting, Dick Sargent would lose to any of them. Kirk wins.

Sean Connery's Bond versus new challenger Batman of the 1940s comics: Although they both have really cool toys, Batman also has a suit. Batman wins.

Gorbachev versus Kirk: Even though Gorbie is both Harry Potter and has nukes, Kirk has Star Trek creator Gene Roddenberry and a ship that can blow up an entire planet. Kirk wins.

Samantha Stevens versus Bob Barker: Bob Barker has the animals, plus he also has millions of fans. Samantha just has wimpy Darin and her mercurial mother. Bob Barker is also cooler. Bob Barker wins.

Kirk versus Angelina Jolie versus Bob Barker: At this point, one of the audience members informed us that Bob Barker a black belt in karate, tipping the match in his favor. Kirk and Angelina would distract each other by going off in the bushes together, and Bob Barker would drop a toaster on them.

For the rest of the day, whenever I saw anybody I knew, I'd ask them, "Guess who won 'Vs.' Bob Barker!" The look of surprise on their face was wonderful.

Every time I passed a fellow "Vs." panelist, we'd say, "Bob Barker. How did we let that happen?"