After the "Versus" panel, The Gryphon wanted to go to The Cheshire Cat's panel. 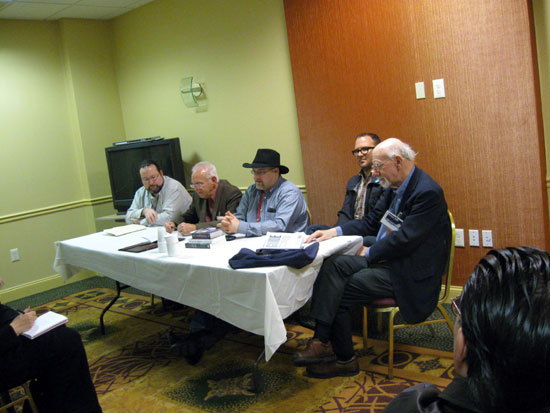 If the singularity actually happens and the future becomes incomprehensible, what will Science Fiction writers write about?

We walked in a little late, because the previous panel hadn't ended until the very last minute. I don't think we missed much beyond the introductions, though.

Cory Doctorow suggested that "We're already there." He explained that if you view evolution not just as adaptation to circumstance but as a progress to perfection, singularities are just a reflection of that progress.

Bud Sparhawk and David Louis Edelman agreed that the march of scientific progress has been accelerating, leading to some authors being incapable even now of keeping ahead of the latest developments. Sparhawk added that, really, SF is generally not predictive anyway but rather, cautionary. He also pointed to the new dialogue of how we explain ourselves to each other (such as Facebook and Twitter).

The Cheshire Cat observed that we've switched from the physics age, the biologic age to the information age, and nowadays, it's harder to predict what's beyond the standard model, because the speed of change is faster.

They discussed the function of technology in SF. Doctorow said that cyberpunks used computers for their god-like qualities because the audience didn't know much about them. The Cheshire Cat suggested that the construct of the singularity is about playing with the idea of what would happen in such an instance. "How do humans relate to something bigger than them: God, a singula4rity, society, the company they work for."

Edelman noted that stories about technology are always really stories about humans, where the technology is a tool for exploring aspects of human nature. To this, Tom Purdom added that if you transform characters too far beyond human traits they become unrecognizable, and it's harder for the audience to care.

Besides, Edelman said, "Predicting the future past five to 10 years is really just a fetish." In other words, it's nigh impossible; just a theoretical game.

Doctorow summed it up nicely: "The future composts the past. There is no tabula rasa." He said that sometimes SF writers want to do that, to imagine that part of the present no longer applies. For those purposes, invoking the singularity can help. He continued, "Do we really have to drag the past around with us like a suitcase full of junk we're not going to look at again?" The answer? According to Doctorow, yes.

Ultimately, it was a very enlightening discussion, even for us non-scientists in the audience.

Moral:
Past is present is future.