After the singularity panel at Philcon on Saturday, The Gryphon and I joined The Cheshire Cat for lunch in the hotel restaurant. I had a tuna salad wrap with a side salad instead of French fries. We told The Cheshire Cat he'd held his own on the panel, and it had been a great discussion.

I looked through the schedule and asked if they wanted to go to the Dr. Horrible singalong, but neither of them were really interested. Instead, we took a walk through the Dealer's Room.

Right inside the door was a table full of games, so naturally, we had to stop and look. That vendor also had a chest filled with plushies. Looking through them, I found plushies designed to look like various microbes. I found it amusing to pull them out of the chest and say, "Should we get hepatitis for the baby? Should we give the baby rabies? Do you want to give the baby E. coli?"

Ultimately, we decided on the common cold, in part because it's an octagonal plushie with eyes on it. Once the baby is past the stage of just drooling on toys or putting them in his or her mouth, it could be used as a ball.

We also picked up Monty Python Flux, a game I'd been wanting since finding out about it earlier this year.

The other tables included many book sellers, including some authors selling their own works; clothing booths (kimonos, corsets and T-shirts); jewelry; elven costume accessories; artwork; and some music. I also got some handmade Christmas cards from one of the artists, which feature snowmen as comic book heroes, with amusing sayings. 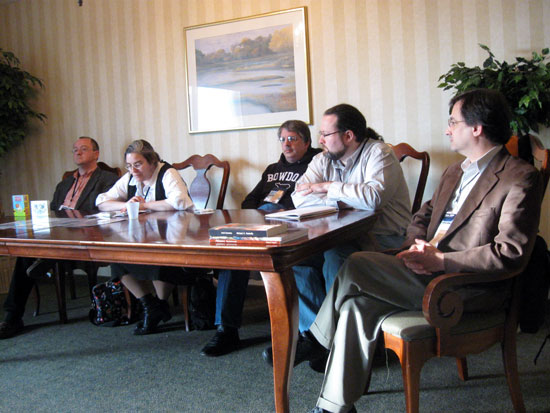 I accompanied The Cheshire Cat to his next panel:

Social Changes No One Saw Coming

Why do we seem to be better able to predict changes in our technology than changes in our way of life? Very few Science Fiction authors predicted changes in our society that allowed, for example, an African American to be elected President, legalized gay marriages or changes in gender roles. What future changes are the majority of our authors failing to predict now?

I warned The Cheshire Cat I would have to leave early in order to get to the key note presentation a little early. Plus, I had to run out to my car first and pick up some things.

They started by speaking about the interesting social constructs that appeared in older SF movies, such as, Kimberly Ann Kindya pointed out, the fact that people used to smoke on spaceships!

The Cheshire Cat noted that SF is worse at predicting technology than social changes. And to this, Walter Hunt added that sometimes they resist showing social changes simply because people like to imagine that things will stay the same, regardless of the advancements of technology. The second wave of SF, Kindya said, has shown more social changes.

Michael Ventrella added that it's not just SF writers; lots of genres have trouble predicting the future. Hunt observed that the Cold War writers imagined the Cold War would go on perpetually or end in a calamity.

As I had to leave, the panel was just getting to some changes that were not anticipated, such as Kindya pointing out that there is no Big Brother. Instead, people are voluntarily making their private lives public through forums such as blogs, Facebook and Twitter.

I wish I could have stayed longer, but I needed to go, so I quietly slipped out.

Moral:
Even SF authors are sometimes reluctant to envision change.