Thoughts from the Key Note Speaker

From the social change panel, I made for the hotel's concession area, to buy a snack to have in my bag, should I need it. The plan was to then grab my complete works of Edgar Allan Poe from the car and make it to the ballroom for the key note presentation in time to arrange an interview with Catherine Asaro for Sunday.

Now, as fate would have it, I hadn't even made the snack panel when I ran into

onezumi and talked to her for a while. That did turn out to be our longest conversation at the con, though, so I'm glad I stopped.

By the time I'd bought a snack and grabbed my book from the car, I arrived only about five minutes early. Asaro was nowhere to be seen, so I asked a guy near the door, and he said that she'd gone back to her room to get something. The problem was that I knew I'd have to leave early for my own panel, so I'd been hoping to arrange the interview before her keynote presentation started. She and her keyboard accompanist, Donald Wolcott, however, breezed in and marched straight up to the stage. 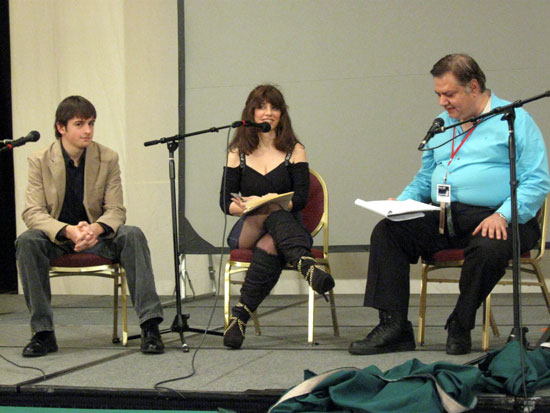 Fortunately, she gave people the opportunity to bring up pictures of her, if they had them, to get them signed. I'd received one from her the day before, so I brought it up on the stage and, when she went to sign it, I told her quickly that I wouldn't be able to stay until the end and I was hoping to meet with her tomorrow morning or afternoon. She said that she'd be free after her 3 p.m. reading, so I arranged to meet her in that room after it ended.

In a somewhat nontraditional format, rather than giving a speech, Asaro and Wolcott were instead interviewed by Oz Fontecchio, a former Philcon president and the moderator of "The Eye of Argon" reading which I'd attended the night before.

Here are some highlights:

Wolcott's musical interest started with a Christmas gift at age 5. Since then, he's learned classical piano, has performed in a jazz ensemble, taught himself bass, guitar and drums, earned multiple awards in college and is an in-demand performaner in Washington, D.C., and Maryland.

Asaro started out her career as a ballet dancer but fell in love with science and physics in college, eventually earning a Ph.D. in physics and continuing to write scholarly papers alongside her fiction works. She observed that ballet dancers are often good at match, and she theorizes it's because ballet relies on patterns, repetition and algorhythms.

She began writing in grad school and delayed her doctorate by six months to finish some writing projects. "If you're a writer, you have to write," she said.

About her tendency to mix genres, such as hard science with romance, she said, "No one told me you can't do this, so I did it." Her first book, she said, was like Romeo and Juliet in space with some military SF thrown in.

She said that the two genres do have something in common: a scientific SF story usually revolves around a problem that has to be solved. In some ways, romance is the same way, except that the problem to be solved is the relationship.

From an early age, she enjoyed reading SF but felt there needed to be more females in it. Hence, when she began to write her own works, she did so. She admits, though, that making them strong female characters was not deliberate. "I wrote what I liked."

About her latest project, a musical CD/book combination, Diamond Star, she said the book came first, but she discovered that in order to write it she found herself needing to write lyrics. And in order to write lyrics that made sense, she wanted to write music. So she connected with the front man of Point Valid, who was really interested in the project, and he helped her write the songs.

However, when it came time to promote the book, the lead singer of Point Valid was overseas in Israel, so she placed a Craig's List ad and found Donald Wolcott to accompany her to her public appearances. Asaro has also been studying with a voice coach.

She and Wolcott are currently working on another CD, and she also mentioned the idea of doing a CD based on a new paranormal romance novel. That was all she could say at this point, she asserted.

About then, I had to leave in order to be early for my own panel, on the poetry of Edgar Allan Poe.