After the key note presentation on Saturday at Philcon, I headed for my next panel, about the poetry of Edgar Allan Poe. 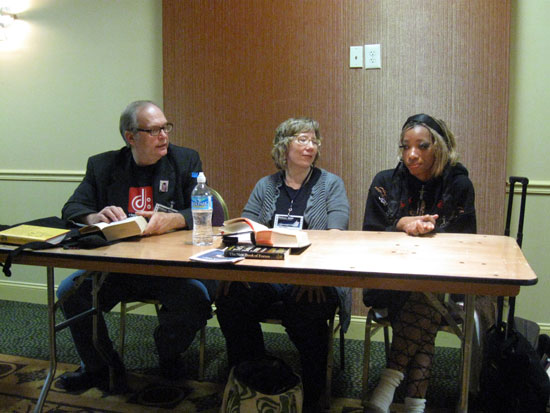 (from left) Richard Stout, me and Stephanie Burke 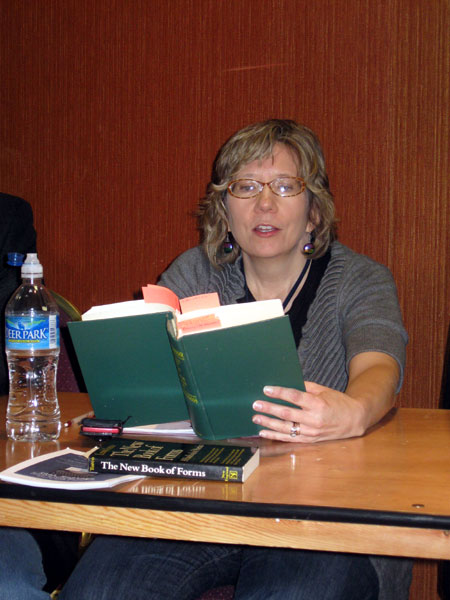 Even people who say that they hate poetry love his work. What are your favorite Poe poems in the fantasy and horror genres?

The panel actually ended up being just me, Richard Stout and Stephanie Burke. We only had a few people in the audience, about four or five when we started. By the end, we only had two!

We began by sharing some general observations about Poe's poetry. Richard and I agreed that we weren't overly fond of his poetic work but that it did bear certain literary merits. Then we took turns reading and discussing our favorite poems, including "The Raven," "Annabel Lee," "To Science -- A Sonnet," and "A Dream Within a Dream," among a few others. In addition to discussing the meaning, I had scanned the poems and could discuss how that influenced the way the poems were perceived: such as the very uneven lines and meter of "Annabel Lee," lending the narrator a suspicious air.

Both Richard and I had done research into Poe's life and talked about some of the interesting aspects as it related to poetry, such as the fact that he began his writing career as a poet and maintained ties to literary magazines his entire life. I also shared a pointed satirical piece he'd written about the literary world, entitled, "The Literary Life of Thingum Bob, Esq." In it, he excoriates critics for being clueless about poetic form and about writing their reviews just to make themselves sound good.

Stephanie primarily discussed his poetry in terms of reader appreciation, although she also provided some interesting tidbits about Poe's life, such as a new theory about how he died: that he was conscripted into voting for an election by hired thugs whose practice was to hit people on the head, disorient them, and then walk them around to various polls in order to force them to vote under false names.

I think that our low attendance had a lot to do with the time: 5 p.m., which is typically dinner hour. Also, I would recommend that Philcon stay away from poetry panels in the future unless they have a broader focus or include other genres as well. The attendees at Philcon simply don't tend to be poetry fans!