When I was done with my Poe panel, The Gryphon and I went to dinner and then to a book launch party.

We headed first for a Moroccan place he used to enjoy when he worked in Cherry Hill, but it's closed. So we tried a Thai place he also used to like. There was still a Thai restaurant there, but under a different name. Still, we enjoyed the food. I had some Thai iced tea and a dinner that featured lots of vegetables. 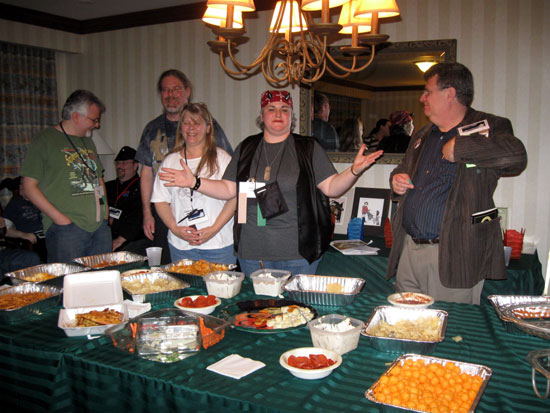 The Anthology Editor (center, wearing black vest and red bandanna)
introduces some of the authors featured in the books being sold. 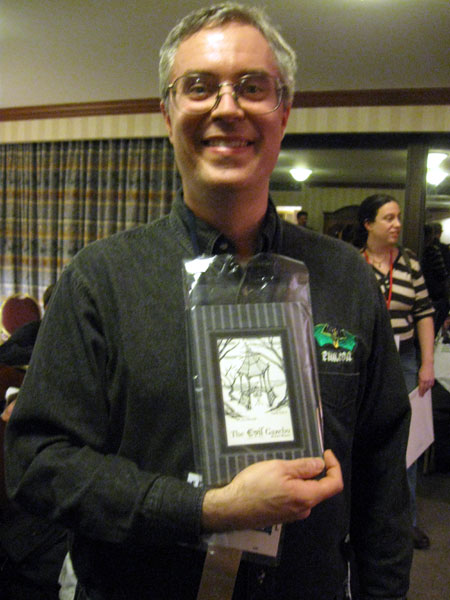 The Gryphon shows off the book he won in the door prize raffle.

After dinner, we headed for the launch party The Anthology Editor was holding for her new book. It was being held in the Con Suite, and there was lots of food. If you bought one of the books, you could get a ticket for the door prize raffle. I bought two books from her, as well as a few additional tickets.

When I walked in the door, a guy in a cowboy hat with a long, brown coat called out, "Alyce!" I was just about to go see who he was when he friend said loudly, "Stop reading people's names off their name tags." So immediately, I assumed he didn't actually know me, and I kept walking.

The Gryphon and I selected some food, mainly some of the little squares of cake and such, and placed our tickets in the bags in front of the items we wanted to win. We started talking to Andrew Ely, who had been on the "Versus" panel with me that morning. I'd met his wife that morning, as well, but didn't realize until I saw her in her makeup that she's a member of the group Patient Creatures, the group of storytellers whose dark humor I had so loved when I'd seen them at Philcon several years ago.

I told them how much I'd enjoyed their performance of a few years ago and regretted not catching them this year. We had a nice time chatting, out of character, which is a bit unusual when she's in makeup.

The Gryphon and I wanted to hang around at least until the raffle drawing, which was a good thing, since he ended up winning a hand-bound limited edition of The Evil Gazebo by Bernie Mojzes, who also signed it for him.

Moral:
Restaurants you knew two years ago might be closed today.