Who Influenced the Doctor?

At the close of the launch party at Philcon on Saturday, I headed to another panel, featuring an online friend, 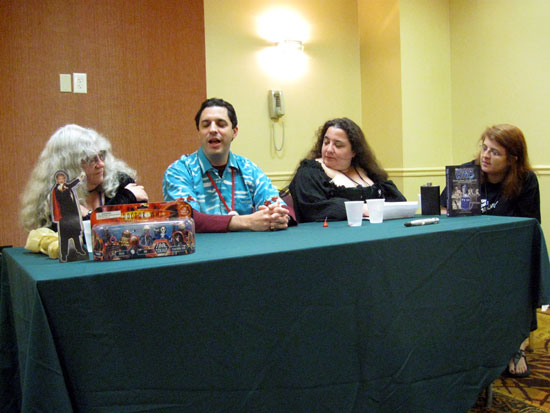 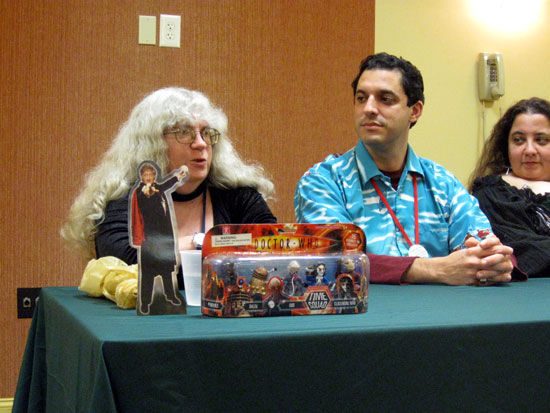 Influences on Dr. Who

What are in the influences which have shaped Dr. Who over the years?

I had met Norda through LJ Idol, and I got there early enough to say hi to her and give her a flyer to the LJ Idol anthology that's coming out soon from Fey Publishing, which will feature four of my pieces.

We got a chance to chat for a little while before it started. Aside from being shorter than me by a few inches, which surprised me since she's such a big presence, she looked exactly like the photos she's posted on her blog.

The panelists pointed out that the show, both the new and old versions, draws heavily on British culture, so that sometimes references are obscure or night unintelligible to American fans. One such reference to East Enders, for example, a panelist admitted flew right over her head.

Norda pointed out that much of the visual style of the original show was typical BBC house style, as evidence from prior shows such as The Aztecs. Similarly, the sounds of the classic show were influences by the Radio Workshop, which also influenced many other shows and movies, so that console sounds used on Dr. Who also are reminiscent of those in early James Bond movies.

As far as the current series is concerned, Nikki Cohen said that, based on the behind-the-scenes shows she's watched, the current producers hold "town-hall meetings" for the entire crew to discuss upcoming productions and to brainstorm for ideas. Influences vary from historical references to locations, such as the Acropolis.

Terri Osbourne noted that the sound of the current series is approached different, however, perhaps because we are no longer accustomed to the days of radio, when sound was used to provide a complete picture. Norda agreed, saying that in the original series, since the producers were limited in terms of the visual field, they emphasized the sound.

Near the end of the panel, they discussed how Dr. Who might influence future television shows. Cohen hypothesized that, as geek culture becomes more prevalent, we'll see references to Dr. Who becoming more mainstream. The family dramas Robin Hood and Merlin are similar attempts, she said, to produce a family-friendly drama with fantasy or SF elements.

At the close of the panel, David Silverman announced, "Panel's over. Time to party!"

I headed up to Norda and said, speaking of parties, that I was about to go to one a friend, Systris, was holding. Turns out Norda was planning to go to that, too, so after she put her Dr. Who collectibles away, we headed up together.