Following the Dr. Who panel Saturday night at Philcon,

norda and I headed up to a party hosted by 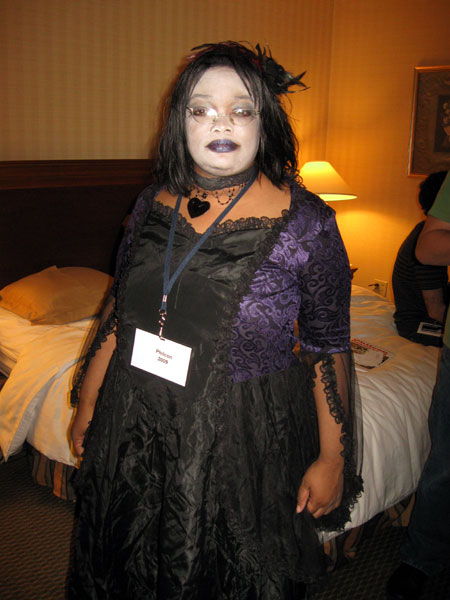 Our party hostess, Systris, done up in a Goth outfit. 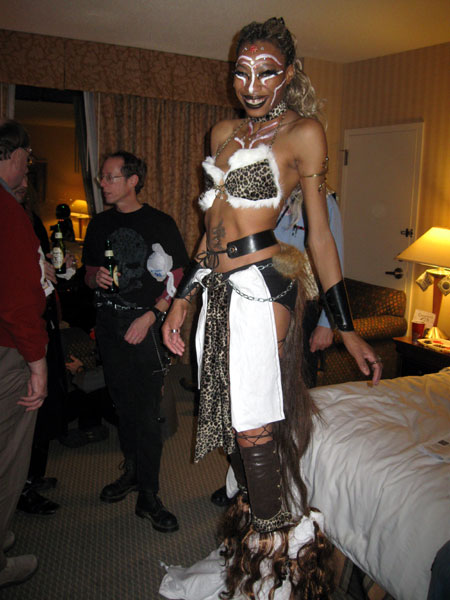 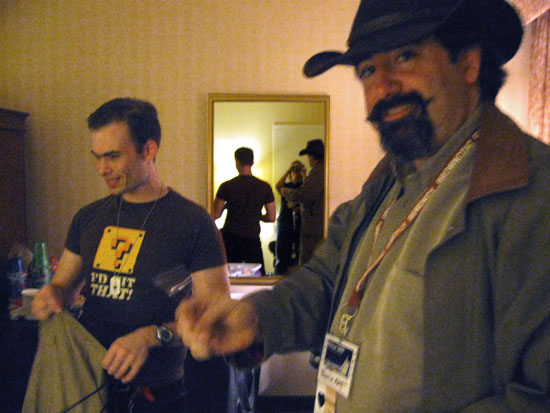 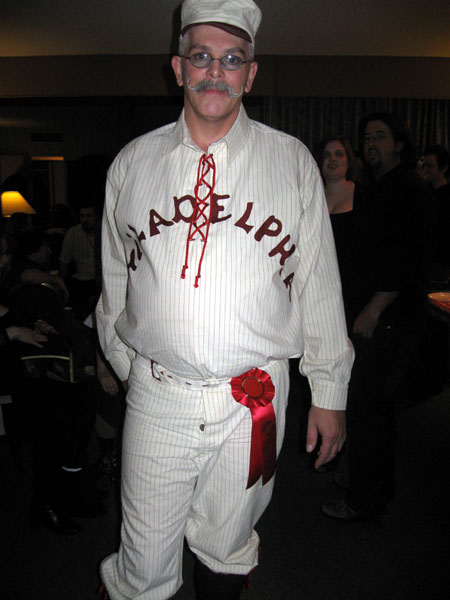 A Philcon volunteer wears a reproduction of a vintage baseball uniform.

Systris was a great hostess. She'd been careful to provide some nonalcoholic drinks, which I greatly appreciated. I had some orange juice with some club soda, then some lemonade with a different club soda (this one exploded all over, spraying some nearby people, and I quipped, "What gets out club soda?")

While Norda was there, I sat near her and we chatted until she had to go, saying she was going to turn in.

I talked for a while with a guy in a steampunk troubadour costume, with a guitar slung across his back. I asked him if he played, and he said that he did but he was waiting to play until later in the filk rooms.

At 11:30 or so, Systris handed out door prizes by drawing out names she'd been collecting as guests arrived. I won a book. Of course, people found my response funny: "Oh, another book." I had to explain that I'd bought three that night alone.

At about that time, The Ghost Captain arrived with some female friends, and they very kindly gave me a comfy chair to sit in. Then in walked the guy in the cowboy hat and long brown coat I'd seen earlier in the day. When I saw him, I said, "That's the guy who was reading people's name tags at the launch party!"

"That's the guy?" he said, and marched across the room towards me. As he got closer, I looked in his eyes and realized I knew him from college. I'd been thrown off, not only by his friend's comment, but by the fact that under his real name he's written in large letters, "Tequila Matt." I explained what had happened, and he told me that what I'd missed hearing when I continued across the room was that he turned to his friend and said, "No, I actually know her."

We got a chance to catch up a little bit. He was in great spirits, amusing us all by producing almost anything we could ask for out of his pockets. In his pockets were various tools, including a cigar trimmer, a lighter, cigars (of course), and I think even some snacks. If we'd continued to ask him for things, I think he would have kept producing them. I told him it reminded me of Harpo Marx and his bottomless pockets.

After we'd been at that party about an hour and a half or so, Tequila Matt's friend, who had won a pirate bear and was wearing it on a lanyard around his neck, told us he knew of another party. He told us it was for the SF Writers Guild, but Philcon participants and their guests, as well as Philcon staff, could attend. About half of us were participants or staff, and we took the others as our guest, having no trouble getting in.

My friend the Browncoat was there, too, so I got to spend a little time with her. But mostly, The Ghost Captain, me and a few other women got chairs and talked over to the side. Near the end of my time there, DJ Rock came in with his girlfriend. She was wearing the same costume she'd worn to the Halloween party, and getting just as many compliments.

Since it was getting late, I kept pulling my phone out to see if The Gryphon had tried to text me. I had it on vibrate, and I'd been having trouble feeling it: possibly because of the extra layers of cloth in the pocket of my maternity jeans. If I didn't hear from him, I figured he was happy spending time with friends, since I'd texted him my room number and he hadn't joined us.

Just about the time that The Ghost Captain said she was going to head back to her room, The Gryphon walked in, telling me that he'd run into DJ Rock downstairs who told him it looked like I was ready to go home. I guess it was obvious I was getting tired.

On the way out, I was telling The Gryphon about Tequila Matt when who should we run into but him! I introduced them to each other, and as we headed out, Tequila Matt headed back inside, presumably for more partying.

Moral
If somebody calls out your name, figure out if you know them before walking away.