After attending the theremin concert on Sunday at Philcon, I had a book signed in the dealers' room and then attended a panel about weird science. 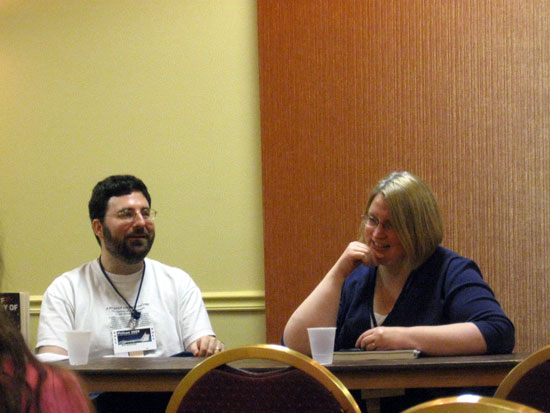 Before heading to the next panel, I stopped in the Dealers' Room to get C.J. Henderson to sign an anthology called the stories (in) between, featuring authors who have read at Between Books in Delaware, purchased from the store owner, Greg Schauer. Several years ago, when I was single, I spent many hours there with friends, so I was happy to buy the book from Greg.

Then I headed up to a panel that looked interesting:

Death rays. Earthquake generators. Ice Ages that cover New York in 24 hours. SF books, movies, and TV have offered up some STRANGE science over the years. Here's a panel to talk about some of the Weird Science we've seen.

Of course, in the written version of the pocket guide, Mark Wolverton was also listed as being a panel member, which was one of the main reasons I wanted to attend, since I know him through the Philly geek crowd. He wasn't actually on the panel any more, and when I ran into him later, he told me that he'd asked to be removed from it, I believe for his scheduling convenience.

The two panelists talked a lot about Star Trek and its many weird and nigh-impossible creations, such as the transporter and Jordy's visor from Star Trek: The Next Generation, which can see all sorts of particles usually invible to the hunman eye.

They also spoke about the movie Core, where the core of the earth supposedly stopped spinning and scientists recommended setting off a nuke in order to start it up again.

And they discussed the many twisted science facts in the movie 2012, where neutrinos are supposedly to blame for the destruction of much of earth. Neutrinos, the panelists explained, bombard our planet every day with no harmful effects.

They were just beginning to talk about a Larry Niven story that discusses time travel and the concept that the laws of physics allow time travel but that the universe itself doesn't support it, when a phone began ringing. Realizing that it was coming from a bag up front, apparently left behind by a previous panelist, one of the attendees tried to find the phone and see if, perhaps, it was the bag's owner trying to locate the phone and therefore the bag.

The phone was hard to find, but right inside the bag was the name tag for keynote speaker Catherine Asaro. So, at the panelists' suggestion, the attendee ran the bag downstairs to Con Ops. Sure enough, Asaro showed up just after he'd left, looking for the bag. I offered to walk with her and show her where Con Ops was, and because I could recognize the attendee who'd taken the bag, should we see him on the way down. But after I stepped back in the room to collect my own bag, Asaro had disappeared.

I stopped in Con Ops, just to make sure she'd made it, and she had, retrieving the bag with no trouble. At that time, I reminded her about our arrangements to meet after her 2 p.m. reading, and she said she'd see me then.

Moral:
Science fiction is called "fiction" for a reason.