After my disappointing experience with the failed Catherine Asaro interview at Philcon on Sunday, I just wanted to do something that was low-stress and fun. 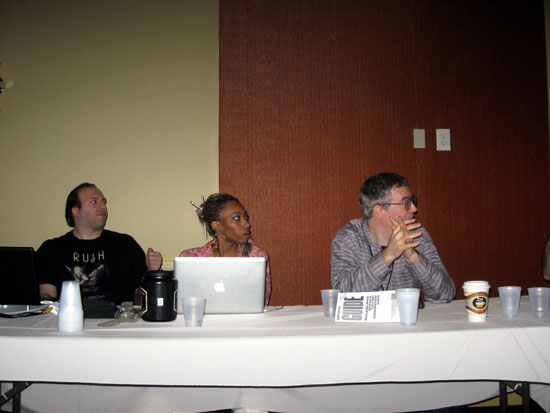 (from left) The Pop Culture Junkie, Stephanie Burke and The Gryphon 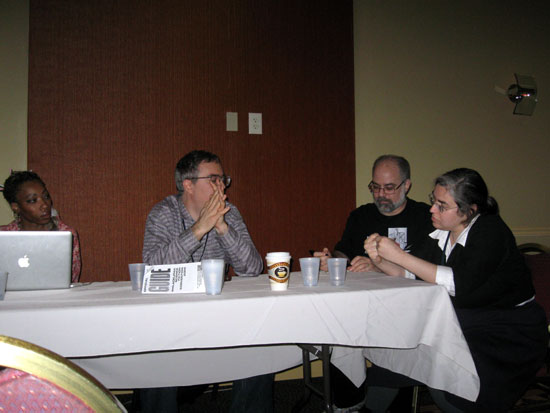 By this point in the day, I had a headache, so I texted The Gryphon to find out where he was. Turns out, his panel was still ongoing:

Anime And The Revolving Door of Culture

A discussion and exploration of the phenomenon of anime, its influence on western science fiction/fantasy and its incorporation of our own cultural nuances.

When I walked in and took a seat near the front, propping up my feet, The Gryphon saw I looked down and asked with his eyes and a gesture what was wrong. So I texted him about the interview cancellation and my headache. Much to my surprise, The Gryphon left his seat at the table and walked down to where I was, to give me a hug and make sure I was OK. I assured him I was.

It was a little cold in the room, and I hungry, so I ate an apple I had in my bag.

The conversation was interesting. I wish I'd been able to appreciate it more, but my head ws throbbing. They discussed various instances of Japanese culture and Western culture crosspolinating through anime.

At 4, The Gryphon and I left, along with The Cheshire Cat and The Dormouse. We met up with The Cheshire Cat's wife, The Paper, to discuss dinner plans. As we stood in the little eating area near the hotel's concession store, we looked over a long list of area restaurants provided by the Philcon information desk, trying to decide on a place.

A couple seated nearby overheard us, and the woman told us they'd eaten at a place called Ponzio's last year, right down the road. She said they'd enjoyed the food and that the restaurant had a terrific bakery, as well. Based on her recommendation, we decided to try it, and we were happy we did. The food was a notch above typical diner fare. I had a delicious chicken marinara, served with two vegetable sides and a side salad. Happily, this meant I got to box up half of it and not worry about cooking the next day. The Gryphon and I also shared a slice of chocolate cake for dessert.

At the table, we all shared our Philcon experiences. We'd all had ups and downs, of course, but the ups tended to outweigh the downs.

On the way home, The Gryphon and I picked up Una, and I realized that my headache, since it didn't seem to be caused by dehydration, might be caused by lack of sleep. Sure enough, after I took a nice nap, I woke up refreshed and pain free.