For Thanksgiving, my husband, The Gryphon, and I traveled to Central Pennsylvania to spend time with my parents. We stayed at my dad's place, arriving Wednesday evening. 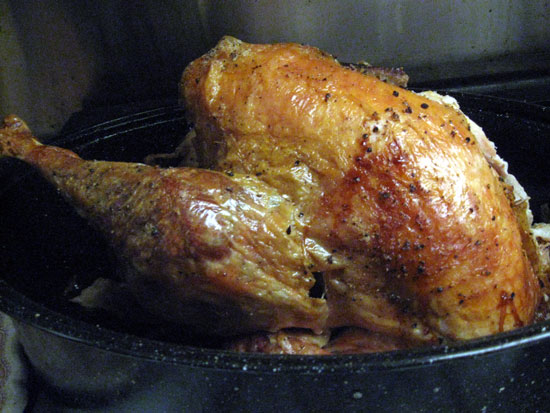 Our delicious turkey, cooked by The Gryphon.

The plan had been to arrive in time for me to do my evening transcription assignments, but things went a bit awry. The Gryphon and his coworkers were trying to finish a big project, which had a strict deadline, and it took longer than expected. Fortunately, I called my editor and explained I was running into delays. He said it would be fine.

I'm glad I called, because we didn't arrive until an hour and a half later than we'd hoped. This was in part due to the fact that we stopped to eat at a rest area along the way. I had a cheesesteak with every type of vegetable they offered.

As it turned out, half of my usual assignments were repeat shows anyway, so I finished at my usual time.

Thursday was Thanksgiving, of course, and The Gryphon and I went to the local grocery store in the morning to pick up a few items he'd need for cooking the turkey, a task he's been happy to take on for the last several years. Although he doesn't normally drive, he drove for me, because my neck was hurting. I think I slept on it wrong and then aggravated it by carrying a heavy bag around at Philcon the previous weekend.

Luckily, Dad is an osteopath, who specializes in spinal manipulation as well as general medicine. He worked on my neck twice over the course of the vacation: the first on Thursday afternoon, the second on Saturday, and by the time we left for home, it was nearly perfect.

My neck is one of the reasons I couldn't do much online this weekend, because my dad's computer is set up so that the screen is at an angle of the desk in exactly the wrong position for my aching neck. For the most part, except for a few short LiveJournal posts, I only did my work.

About 4 in the afternoon, Mom joined us and started finishing up some other dishes, whatever she hadn't already completed at her home. The Pastor and The Pastor's Youngest Son also joined us for the meal, as they have for the last several years.

We tried some new things this year. In addition to turkey, dinner included butternut squash; a delicious dish containing wild rice, mushroom soup and sausage; homemade cranberry sauce; green beans with mushrooms; and a stuffing recipe from Rachael Ray made from pumpkin muffins which I found a little too sweet. We had some sparkling grape juice with dinner, instead of the wine that Dad usually provides, a thoughtful concession to my pregnancy.

For dessert, we could sample slivers from two gluten-free pies, pumpkin and apple. Mom bought those as a concession to The Pastor, who is on a gluten-free diet. Surprisingly, they were as good as normal pies, with flaky crusts and tasty filling. 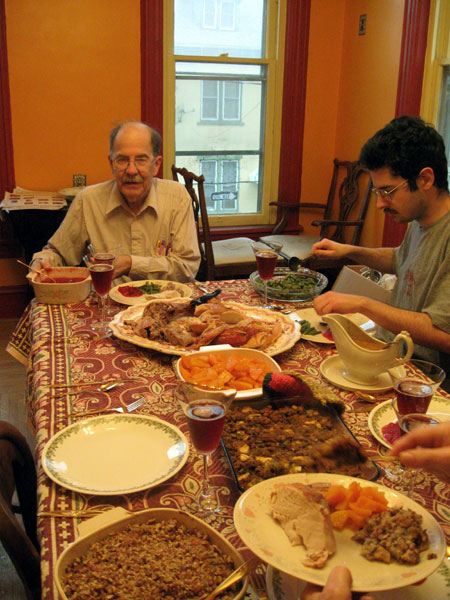 (from left) Dad and The Pastor's Son serve themselves. 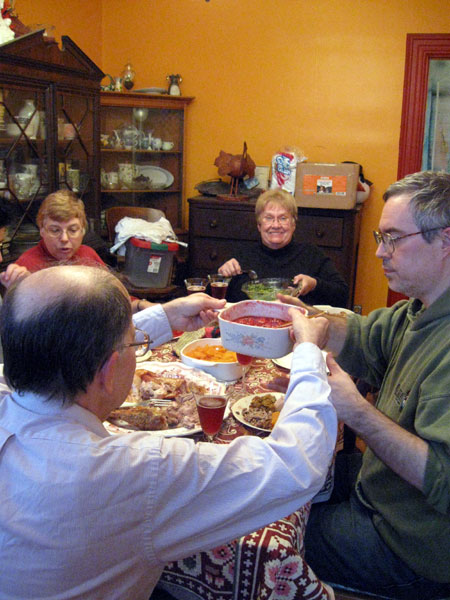 (clockwise from bottom left) Dad, The Pastor, Mom and The Gryphon
pass around Thanksgiving dishes at the table. 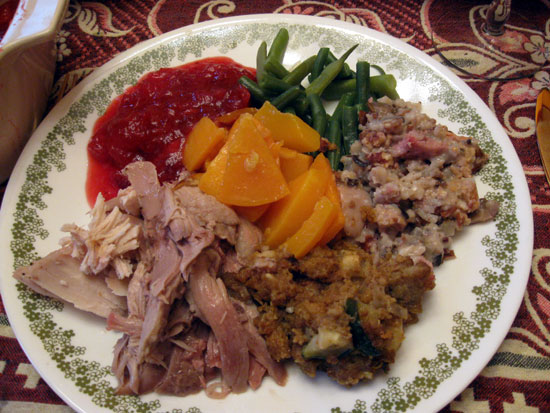 I discovered that just because you're pregnant doesn't mean you can stuff yourself at Thanksgiving without consequence. This year I wasn't quite as careful about serving sizes as I've been since losing weight. I ended up very full, a bit uncomfortably so, for the rest of the evening. This was a little annoying, because it made it hard to focus on my work.

We did get to speak to both my sister and brother and their families on the phone. So even though we didn't have the entire family together, we did get a chance to wish everyone happy Thanksgiving.

Moral:
When you've got neck problems, it's great to have an osteopath in the family.