Friday and Saturday of Thanksgiving weekend were relaxed days for us in Central Pennsylvania, where my husband, The Gryphon, and I had gone to celebrate the holiday with my parents.

Since I was working on Friday, we couldn't do much, but since both my parents were working, too, it didn't really matter. The Gryphon and I took a nice, long walk with our doggie, Una, in the afternoon. And as is my habit, I took some pictures as we went.

I love to document the little details I see, from homespun decorating to wildflowers, some of the many things that give this factory town its unique character. Here are some of my favorites from the various dog walks I took over the holiday. 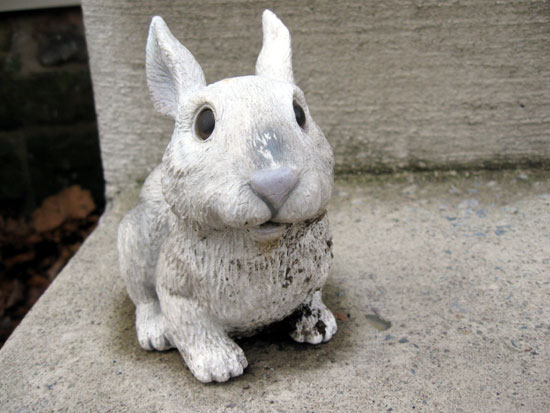 This porcelain rabbit's large dark eyes
make it look either haunted or scared. 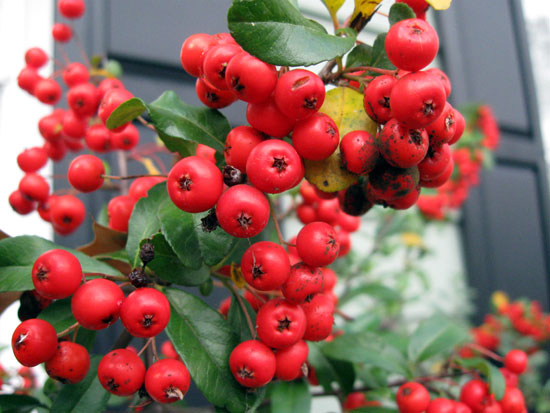 This bush, ablaze with red berries,
adds a festive air to holiday decorations. 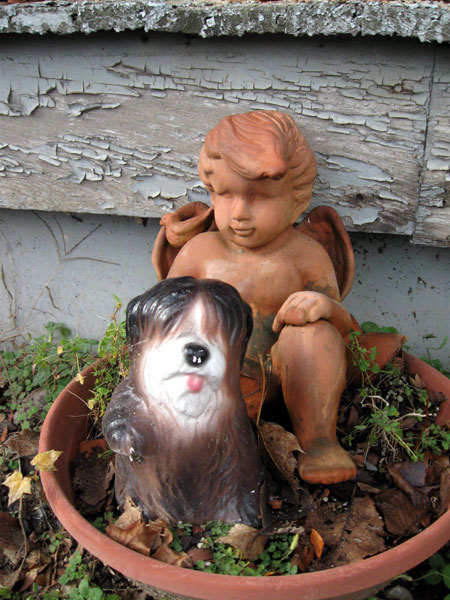 A cherub in a flower pot hangs out with a miniature sheep dog. 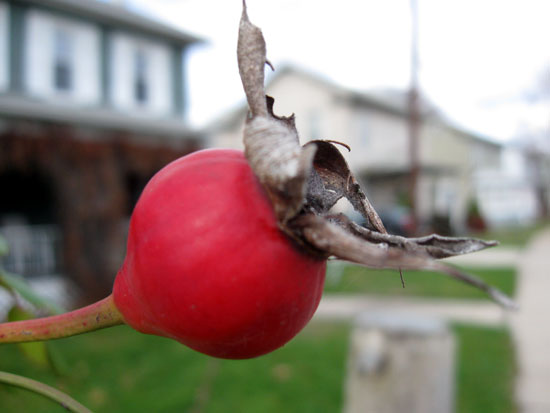 A red bulb on a bush stands out in bright contrast to a bleak day. 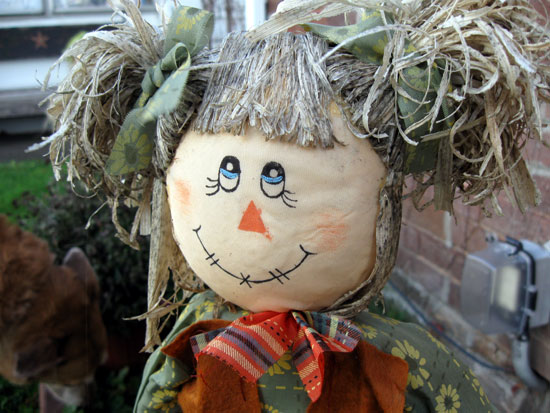 A scarecrow with pigtails grins despite the gray weather. 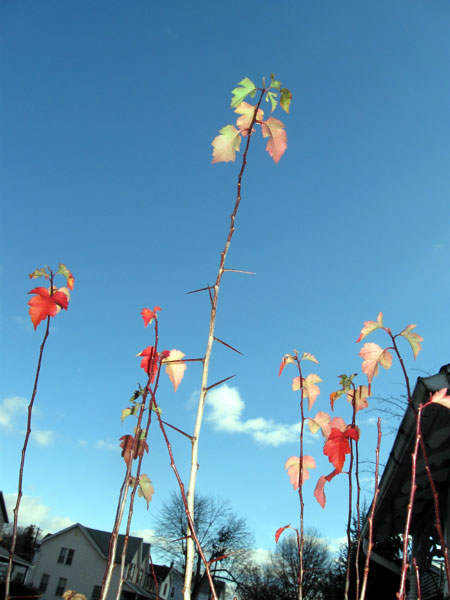 A few red leaves stretch toward the blue sky on an otherwise nude bush. 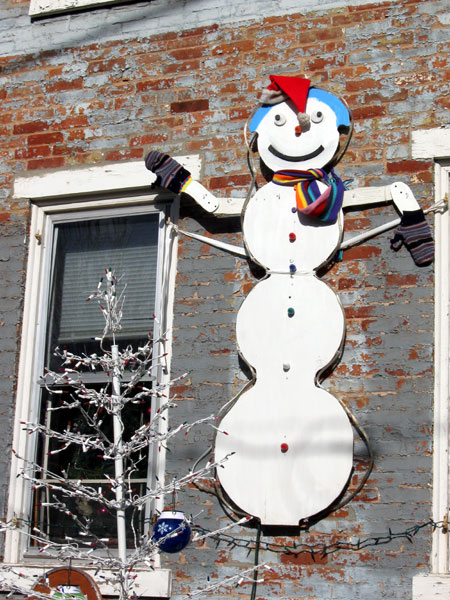 Homemade snowman, cut out of wood, mounted on a house.
He wears real gloves, a scarf and a hat for warmth.

Mom joined us for dinner. She was enjoying cooking for us and especially for our unborn baby, which she said had inspired her to choose nutrient-rich dishes. On Friday, she made some sweet potato latkes to go with Thanksgiving leftovers. I'll have to remember to get that recipe. They were delicious.

On Saturday, The Gryphon and I got to see my parents more, although my dad still worked in the morning. After I walked Una by myself, a decision I regretted, since she was pulling me a bit and aggravating my sore neck, The Gryphon and I had lunch at our favorite coffee shop in a nearby college town. There, we took turns taking pictures of each other. 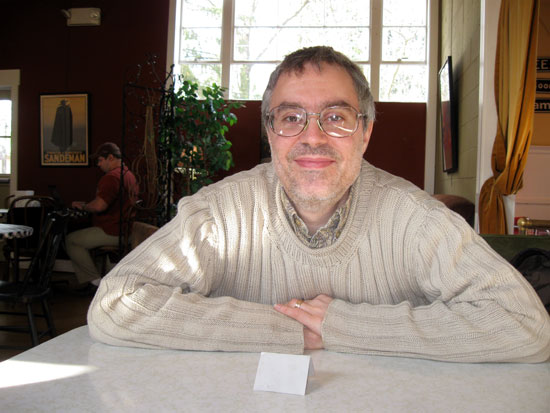 The Gryphon looks relaxed as we wait for our food. 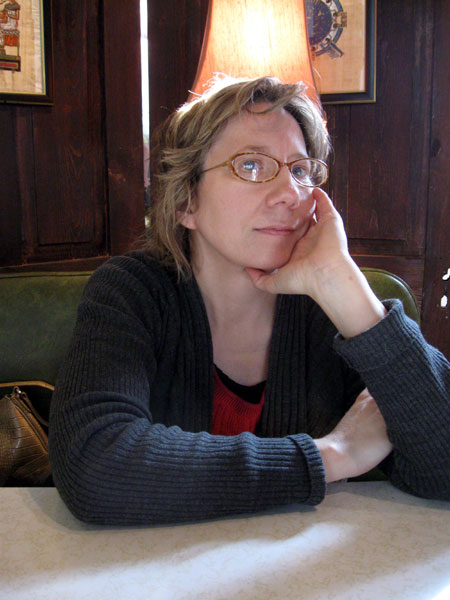 I look thoughtful. Can you tell I'm not wearing makeup?

We also stopped at a local bookstore, where I couldn't restrain myself from buying yet ANOTHER book (this makes five new books just in the past two weekends). When we returned, Dad was already back, even though we hadn't expected him for another 20 minutes.

Dad suggested we go shopping at an outlet that opened within the last several years in my hometown. The first floor focuses on decorative crafts with a country sort of feel. They were nice, but currently, The Gryphon and I don't do much holiday decorating. I'm sure we'll change that when we have our child, but it can't see much from inside the womb.

These were not the sort of gifts I typically give for Christmas for a couple reasons. First of all, it's always seemed silly to give people Christmas decorations on Christmas, since that means they can't use it until the next year. The one exception is Christmas ornaments, which could go directly on the tree, should the recipient see fit.

But more importantly, I usually don't give people decorative items any more. Instead, I try to give people things I think they'll actually use, rather than more knicknacks to clutter up their places. 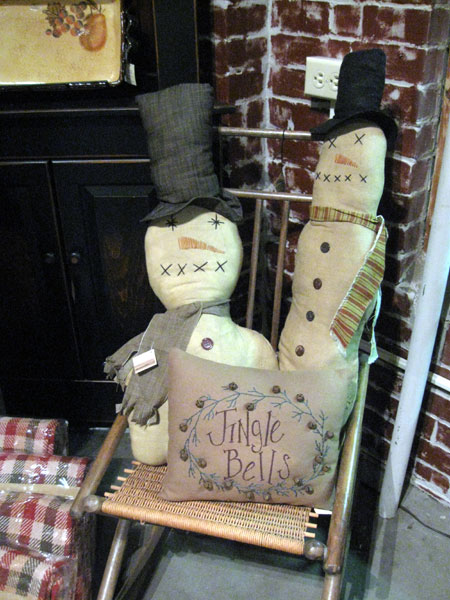 The X's over these cloth snowmen's eyes
seem to indicate they're either sleeping or dead.

So while it was fun to browse the craft section, that wasn't something I was interested in buying. We also checked out the sections featuring home goods like furniture and hanging lamps (again, not something we need for ourselves right now or would purchase as a gift).

In a back section was a surplus outlet, filled with the sort of items usually seen at Big Lots. In some cases, though, the packaging was in bad shape. We saw some air mattresses we briefly considered until we realized all the boxes were damaged and/or taped shut and there was a sign on the bin reading, "Sold As Is." We didn't want to pay even $10 for a mattress that might have a hole in it, just like the one it would be meant to replace.

Other items included tools, decorative items, electronics, hygiene products, clothing for children and adults, and toys. Dad found a weather radio and a couple Christmas gifts for family members who were not with us. The Gryphon and I had no such luck, but at least now we know what sorts of items are available in this outlet. It gives us an option, should we want to avoid shopping at Wal-Mart when we're in town.

Afterwards, we stopped by the American Rescue Workers for me to look for maternity sweaters (or regularl sweaters cut so that they could function as maternity sweaters). I had no luck there, but we dropped The Gryphon at Dad's place and tried a new thrift shop that had opened in a neighboring town.

The store was being run by two women in their 20s who made apologies for the cramped store space but were happy to help me in my quest for maternity clothes. As I tried things in the waiting room, they brought me a steady stream of clothes they felt might work, one of which was a beautiful cotton-blend purple short-sleeved maternity sweater that looks a lot like my purple cashmere sweater, currently in storage. It will be great for layering. I also took home a frilly black sleeveless tunic that can be worn with leggings and layers in winter or perhaps worn as a sundress, come spring.

Mom joined us again for dinner, this time making turkey tortillas, a great way to use up most of the leftovers. Again, I'll have to get that recipe.

Sunday was a short day. The Gryphon and I got up to have breakfast with Dad before he left for church. Then we took the dog for yet another walk, had lunch and I took a nap before we headed home. I think that my added drowsiness was caused in part by the fact that Dad gave me the H1N1 flu shot on Thursday. I've understood that can cause tiredness for a few days.

This time, The Gryphon drove the first leg of the journey, which was nice for me. I could even call my sister and catch up with her about our Thanksgiving experiences. She was with her in-laws, which has become the habit of her and her husband each Thanksgiving. By the time I took over driving, my neck was recovered enough to be almost completely normal.

Moral:
Accept help from your family when you need it.