This is my home game entry for The Real LJ Idol. I am not competing this season but invite you to read the many fine submissions here. Topic number 6 is "Sunrise." 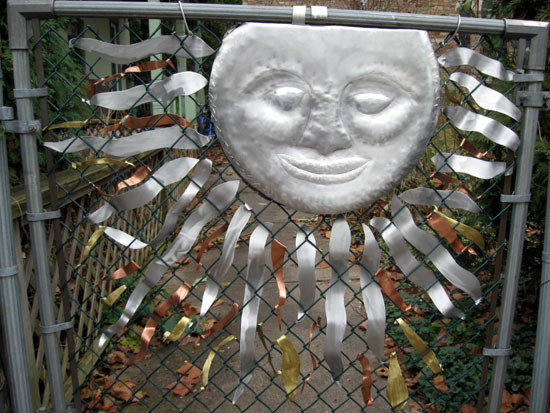 A handcrafted metal sun decorates a chainlink gate in my hometown.

My hometown, a small factory town in Central Pennsylvania, has been hurting since long before the current recession. You can trace the troubles back more than 30 years, to two major floods that hit the downtown in the early '70s. Many of the businesses who suffered damage either closed their doors or moved elsewhere.

Since then, the town has suffered a replay of the same story: big conglomerates purchasing the local factories, then laying off thousands of workers as they outsourced labor overseas.

The mother of one of my best friends worked in one of those factories, and I remember how she would get laid off once a year, during the down part of the cycle. Still, she collected unemployment and union benefits, so that these periods seemed more like a vacation than unemployment. In recent years, however, job loss has been no vacation. Layoffs became permanent, not just a seasonal inconvenience.

By now, most of the downtown stores have closed, except for those that can generate repeat business: hair salons, video stores, bars, pizza shops, real estate and insurance offices, and a few well-established businesses, such as a jeweler who has loyal customers dating back generations.

Every year or so, enthusiastic entrepreneurs try starting up new shops, but partially due to location and partially due to competing with a massive Wal-Mart in the next town, they tend to close their doors quickly.

When I visited my hometown last weekend, it reminded me of visiting the Anthracite coal region of Pennsylvania, my mother's childhood home. I remember passing the formerly grand houses, now run-down. My mom used to tell me stories about how the area once thrived. In recent years, driving through my hometown, seeing the flaking paint and abandoned shop windows, I'm reminded of the tar-papered, dilapidated houses of coal country.

Ten years ago, when I worked at the local newspaper, community leaders made the first steps towards revitalization. They opened an industrial park south of town where, thanks to a state program, they offered tax breaks to new companies. This worked for a while, before the economy bottomed out.

Over Thanksgiving, I was pleased to learn from Dad that permits and approvals had been finalized for a big solar project in the industrial park. When completed, this project would not only bring hundreds of green jobs to the area but would also supply most of the town's energy needs. Growing up in this conservative town, I never would have imagined they would one day find hope through green energy.

The town has gone green in other ways, as well. Over the last several years, walking my doggie, Una, downtown I've noticed a newly-installed historical walking tour, with markers that include pictures of the town in years past. Each of these stops also includes a map container with both streets and businesses labeled, plus benches and landscaping, maintained by the local Garden Club.

In the summer, the town has started a concert series in a newly-cultivated park, which for many years had lain fallow. And Dad told me over Thanksgiving they will be adding a fitness park in an empty lot, where people can stop at different stations to do exercises. Such a course used to be popular in a neighboring town, until the hospital that owned it razed it for a new building.

My Dad is a perpetual optimist, who has always seen sunrises where others saw sunsets. Through his enthusiastic eyes, I catch glimpses of what my hometown might become. A revitalization plan involving green space, culture, and healthy living, could attract new business owners, visitors and residents. The town, after all these years, could spring back to life.

When I walk my dog, Una, on visits home, I photograph whatever strikes me. And much as I am fascinated by decay — say, a bright, new Pepsi machine against a wall with flaking paint — like Dad, I'm excited about signs of renewal.

Recently, I photographed a smiling silver sun someone had added to a backyard chainlink gate. Hand-crafted rays of silver, bronze and gold had been painstakingly arranged, fastened to the wire. A smiling sun, new gateway to hope.

As a rule, I do not name my hometown in order to protect the privacy of my mom and dad, who still live there. Many towns all over the United States are enduring similar fates, however, so this piece is for all of them.