On Saturday was another Otakon planning meeting. My husband, The Gryphon, and I carpooled down with The Dormouse and The Cheshire Cat. Despite tires that his garage has told him must be replaced at his next inspection in a month. The Dormouse's car handled well in the snow (except for a weird stretch of highway that was either icy or just uneven). We probably got about four inches total in Baltimore and somewhat less in Philly, almost none of it accumulating on the roads. 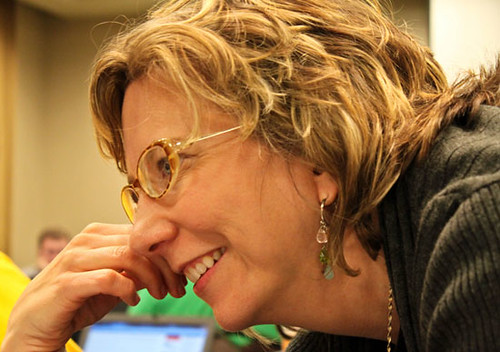 Me at the November meeting, photo by my friend Dar

First was the board meeting, to which I did not have much to contribute, so I added a few sections to my work-in-progress, a written public policy for Otakon Press Relations. We want to spell out exactly how organizations get press privileges, what those privileges get them, what the limitations are, and how you can lose them. So far, the first round of comments from other staffers has been positive, with only minor suggestions for changes from my superior, The Godfather. The plan is to go live with the policy as soon as it's prepared, well in advance of the period when we begin to accept registrations.

Then, the board went into a closed session to discuss personnel issues, and our president, Vyxle, announced the rest of us could take a lunch break and be back by 1:30 for the meeting. In retrospect, if we'd wanted to meet that deadline, we probably shouldn't have all gone to the same restaurant!

Once in the hallway, I discovered I'd left both my wallet and my cell phone in the room, but The Cheshire Cat told me he'd cover me. He even called The Gryphon, at my request, to tell him that we were going out to lunch and I'd left my cell phone behind. That way, if he needed to reach me, he'd know to go through The Cheshire Cat.

We piled in a car with two of my favorite staffers, who currently don't have nicknames in this journal (though I'm open to suggestions). One of them took the wonderful photo you see at the top of this entry, at our November planning meeting. He just e-mailed the full-size version to me. The other staffer, our driver, is a remarkable artist and a super-cool woman, to boot.

About 15 of us ended up at a nearby Ruby Tuesday's, and they were having a slow enough day (what with the snow) that they were able to seat us right away. I ordered the soup and salad bar, as did the head of Industry Relations, whom I'll call Pac-Man after a costume he wore at Otakon last year. We piled our plates high with veggie goodness and were happily munching while everyone else awaited their food. Of course, the fact that we were in good company, with plenty of interesting conversations, helped.

The food arrived all at once, and though it had taken a while, they got everything right. I hope that everyone tipped our server well! She even had the foresight to split up everyone's bills onto separate checks. At that time, she also brought the food we'd ordered for the Dormouse and The Gryphon, packaged to go.

When we returned to the hotel for the regular meeting, we were about 20 minutes late and many more staffers had arrived. This was the big budget meeting (or big-budget meeting, depending on how you want to think about it; this is no dinky convention), which led to a lot of interested parties.

The Gryphon, this year's Comptroller, began the budget discussion after some other old business was discussed. He used a projector to go over the budget, section by section and sometimes line by line if there were questions. It's a long but necessary process, because almost unfailingly people will have corrections or updated numbers to insert.

At the end of this painstaking process, we were able to pass a balanced budget Go us! The Gryphon, however, had a sinus headache, though you never would have been able to tell by the way he conducted himself during the meeting.

We might have taken Vyxle up on her invitation to join other staffers in ordering some pizza, but glancing out the windows at the still-falling snow, we knew it was best to head out. The Gryphon got together with The Cheshire Cat and The Dormouse and decided we should start heading north and stop at one of the rest areas on I-95 for dinner.

At Maryland House, the rest area was decorated with several brightly-lit Christmas trees. I wonder if some blinking lights caused the seizure we witnessed in a young man, just inside Sbarro's. The Gryphon saw it happen. All I saw was a couple minutes later, where his friend was grabbing him by both arms and asking him if he was OK. His friends then moved him to a table in the food court area and fanned him, making sure the seizure was over. I'm fairly sure that 911 should have been called to check him out, but as long as I was there, that didn't happen. Maybe he refused.

I got some chicken and rice, plus a salad at Sbarro's, and we all ate together at tables inside one of the other eateries. I'm fairly sure the chicken was soaked in butter, but otherwise, it was probably a healthy choice.

Fortunately, we got home safely. We picked up our doggie, Una, from the pet sitter's. The snow in Philly had been too wet for Una to enjoy, and she was experiencing the rainy-day blues (she hates to get wet). She seemed happy to come home, perhaps believing we had the power to make the wet stuff stop.

Moral:
Even the best restaurants can't serve 15 people in 15 minutes.