When the phone rang at 9:30 a.m. today, and I saw it was coming from the company that performed our genetic screening test, I answered it with a mixture of relief and trepidation. I'd waited nine days for this call, but it had felt far longer.

Our saga began when we decided to do the sequential screening recommended for mothers over 35. The test was supposed to involve an ultrasound measurement and a blood sample, to check for Down syndrome, trisomy 18 (a more severe form of retardation), and neural tube defects (which can lead to physical and/or mental problems).

My husband, The Gryphon, and I had trouble finding the prenatal center at the hospital where the sequential screening took place. It was a different hospital than the one where my ob-gyn practices, though it's in the same hospital system. We wondered in about 15 minutes late, and I raced to fill out all the required forms.

At first, everything about the ultrasound seemed good. We were thrilled that our progeny now looked recognizably human (albeit only about two and a half inches long at that point). The baby was active, waving its developed arms around (yay! the arm buds have grown into arms). As the technician poked my stomach with the wand to try to get the baby to reposition itself, the baby rolled over and did little floppy movements on its back, like a budding breakdancer. 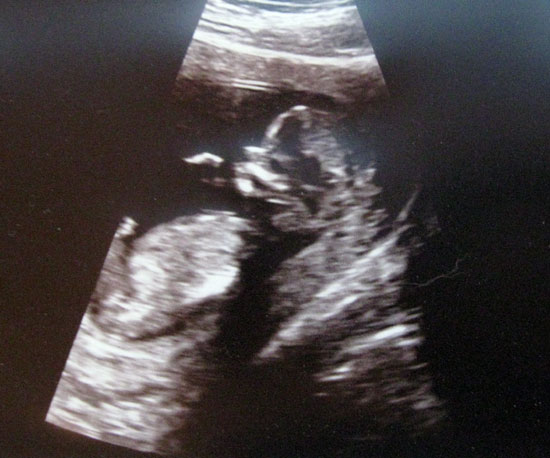 A side view of baby, showing the head and torso.
You can see a hand raised by the face. 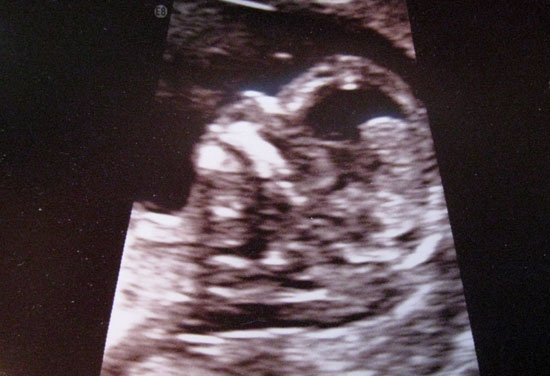 A profile of the head of our little baby.

The heart rate was good, the technician informed us, and the size was good for that stage in the pregnancy (about 12 weeks). But then she measured the fluid at the back of the neck (nuchal translucency) and noted it was a bit bigger than they like to see. She called in the doctor to confirm this and speak to us further.

The doctor took another measurement, which confirmed the result. He told us that it was in a higher range than normal, indicating an increased risk of Down syndrome. Since the ultrasound results already showed a possible problem, he said it wasn't necessary to do the blood test. Instead, he recommended we consider further testing: either chorionic villi sampling (CVS) or amniocentesis.

"I know this isn't the result you were hoping for," he said, "but I don't want you to walk away from this thinking that your baby has Down syndrome. All this test shows is that there is an increased risk." He recommended the CVS because it could be done sooner (between 10-12 weeks, compared to 15 or 16 weeks for amniocentesis). He told us to take some time to think about it and then call back to schedule if we wanted to do the CVS. A slot was available that afternoon, but that was out of the question, because The Gryphon had to get back to work.

I believe this doctor has given this sort of news fairly frequently. The tone of his voice was very rehearsed, almost bored. Either that or he just wanted to go to lunch (which he did as soon as we left). I'm not saying he wasn't helpful or that he didn't say the right things; it's just that he lacked a certain warmth that might have helped cushion the blow.

The walk out of the hospital was difficult, as I tried to hold in my worried tears. I managed until we got into the car, then broke down. The Gryphon soothed me and told me that there was no reason to be so upset at this point. After lunch and a phone conversation with my dad, an osteopath, we agreed to sign up for the CVS.

After dropping The Gryphon at work, I sat in the parking lot and called the perinatal center again to schedule the procedure. It was the Tuesday before Thanksgiving, and staffing was light, but after I waited on hold for a while, the receptionist was able to schedule the procedure for the Monday after Thanksgiving. I then called my ob-gyn's office to give them the information and to share the fax number where they had to fax my blood type and orders for the procedure.

Then came nearly a week of waiting. We didn't tell anyone else in the family about the ultrasound results, only that we were waiting for results from the genetic screening. I didn't want to worry them with the ultrasound results until we knew more. I was actually a little happy that I felt ill for part of the holiday, so that my mom wouldn't guess the true cause of my seeming down.

For the CVS, we drove to yet another hospital, where we again had some trouble finding the perinatal center. At least this time, though, we arrived closer to our appointment. Again, I filled out some forms, and then we waited for the genetic counselor to speak to us.

The genetic counselor spoke to us about our family histories while she made up a family tree. After reviewing it, she said there were no significant increased risks based on our heritage. She then pointed to a couple charts in a spiral-bound book, showing us the risks of having a baby with Down syndrome, based on my age as well as based on the size of nuchal translucency (a similar chart based on age can be found here). Based on the nuchal transparency, which were the lower odds, there was a 70 percent that our baby would be normal. Fairly good odds, but still sobering.

She showed us an example of the sort of results doctors would receive from the test. It would give them a full genetic picture so that they could check for missing or additional chromosomes.

After a short wait, we were taken into another room for the procedure, beginning with another ultrasound. In this one, the baby was rolled on its side, facing us. The technician took a picture with its hands on either side of its face, as if waving. In the corner, she typed, "Hi Folks." Again, the heart rate and activity were good. 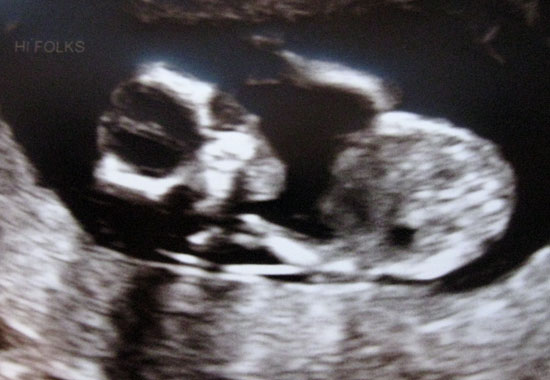 The baby is facing the front, arms raised to either side, as if waving.
If it looks skeletal, that's because ultrasound waves reflect best off bone.

The technician, RNs and doctor were all female and very friendly, setting me at ease. They described exactly what would be happening, both before and during the procedure. The easy, gentle way they interacted with each other and me were soothing, helping me to be calm throughout the process.

In my case, the placenta was situated in such a way that the doctor could do the procedure through the cervix, rather than inserting a needle into my stomach. For those who are interested in an illustration, you can find one at the Mayo Clinic's site here. It looks painful, but it was only a little uncomfortable.

I watched the procedure on a screen, which was somewhat amazing. The baby's heart rate afterwards was the same, and they told me that it probably didn't even know anything had happened. Perhaps my calmness helped, as well.

Then, once more, it was a waiting game. The results, they said, would be ready in 8 to 10 days, depending on how quickly the cells cloned in the lab.

So this takes us back to today: me with the phone pressed against my ear, waiting to hear the results. After confirming my personal information, for privacy reasons, the caller told me it was good news. Our baby has 46 chromosomes, the normal number: no extras and none missing. I exhaled, enormously relieved. Even though I'd had a dream a couple nights before that our baby was healthy, I hadn't been able to relax until I knew it for sure.

"Did you want to know what gender you're having?" she asked.

While previously, I had hoped for a girl and imagined I would be disappointed if we had a boy instead, my perspective has entirely changed. This is what was running through my head this morning: "Our baby has the right number of chromosomes! Hooray! Oh, and it's a boy. Imagine that."

Considering that we've only chosen a girl's name so far, I'm looking forward to flipping through my baby name books. As if in sympathy, the rain that had held for days cleared up. The world was suddenly bright once more.