This weekend, for me, was a good one. By the end of it, I had accomplished most of my Christmas tasks, sorted through some possible baby names, and made good progress on my book of personal essays. In a more minor consideration, I also worked through many of my DVR recordings. 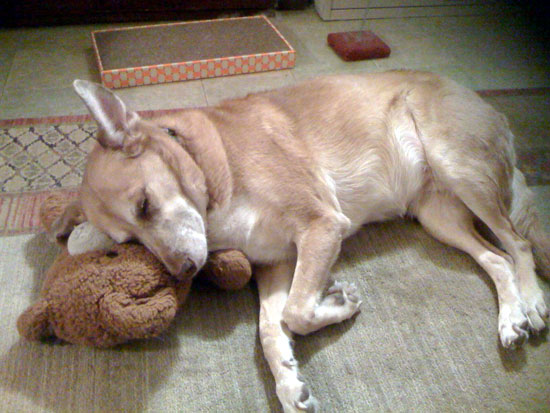 Una uses her favorite teddy bear
as a pillow to get in some quality nap time.

Saturday morning, The Gryphon had a hair appointment in Center City, so I accompanied him. While he had his hair cut, I sat nearby looking through a book of baby names. This way, I could run ideas past him for his approval.

Some names were relatively easy to dismiss, and I only read them for amusement's sake. Others sounded good until we gave them more thought, considering likely nicknames and the like. Other names we both agreed were possibilities.

By the end of the day, I had completed looking through the book, and we had about six possible names written down.

After a nice lunch at DiBruno Brothers, where the cashier brought us a free chocolate chip cookie when she learned I was pregnant, we walked across the street to the Hallmark store and picked up three boxes of cards.

We browsed a couple nearby stores for Christmas gifts and then drove to one of our favorite book stores, Between Books in Delaware, again in search of gifts. The owner, Greg, was enormously helpful with his suggestions.

At home, we took an afternoon nap, from which we were awakened by a door-to-door salesman for the Clear Network. Then we both did some personal stuff on our computers. Dinner was some takeout we'd picked up at DiBruno Brothers: chicken marsala with broccoli rabe, plus some leftover butternut squash and potato casserole.

In the evening, I composed our annual holiday letter and put together the cards. I lacked a few addresses, and sent e-mails to those people asking for updates. As we were making out the cards, I watched the recent SyFy series, Alice. I'll share further thoughts on that tomorrow. For now, I'll summarize by saying it was an inventive reimagining of the classic Lewis Carroll books, Alice in Wonderland and Through the Looking Glass.

Sunday we were homebodies, which was aided by the fact that it was extremely rainy all day. The Gryphon cooked us an Italian pot roast, a process which took four hours. It was very tender.

I wrapped all the gifts for my brother's family, so that I could mail them today (done!). In addition, I went through my bills. All the missing addresses came in, so I completed the cards.

For the rest of the day, I went through my online writings, choosing possible selections for my book of personal essays. Now that I've completed that portion of it, I'm going to go through columns I've written, as well as some unpublished writings. Hopefully, I can get the book put together to publish it by spring.

So by the end of Sunday night, I was feeling pretty good about what I'd achieved.