This is my home game entry for The Real LJ Idol. I am not competing this season but invite you to read the many fine submissions here. Topic number 8 is "Reprobate." 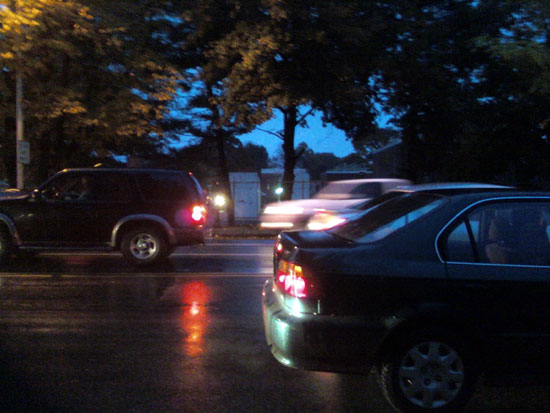 Car taillights reflect onto the pavement at night.

By now, most of you have heard me talk about The Luser, a skinny blonde punk I dated while I was still reeling from the breakup of my first marriage. You've heard the story, but you've never heard the postscript.

To remind you, The Luser cheated on me and then, when I took him back, moved into my place and lived off me for several months, insisting I keep him supplied with cheap vodka, cough syrup, cigarettes, and stacks of rented movies.

One night, he peered in the doorway at me in bed. Thinking it was an affectionate gaze, I kept my eyes shut. But really, he was assessing if I was asleep enough to notice if he snuck my credit card from my wallet. I discovered this after he left, in the form of charges to a particularly filthy Web site.

Again and again, The Luser lied, cheated, stole. He drank heavily, talked about his grand dreams that could change the world, then slept it off for days. More than once, we got into screaming arguments where he threatened to leave and I begged him to stay, too afraid to be alone.

Then, one fateful night, in the midst of an argument, he hit me so hard my glasses flew across the room. Though I didn't know it at the time, he left me with a permanent eye injury. That was the final straw. I ordered him to pack up his stuff, and I drove him to the Greyhound bus station, more than an hour away. I didn't care where he went, just somewhere far from me.

My doggie, Una, who adored him (after all, he treated her better than he did me) rode between us in my 1988 Ford Ranger, Red Arrow. When I dumped The Luser at the bus station, he hugged Una and stroked her ears. The poor, confused doggie suffered from abandonment issues for weeks, running around our empty apartment whenever we returned home, looking for him. She couldn't know that I painted the windows shut to prevent him from sneaking back and stealing her away.

Yes, many of you have heard this before, but you haven't heard what happened next. A few weeks later, returning from dinner at my mom's place, I discovered a message on my answering machine. The Luser claimed that he was doing fairly well but was hoping to speak to me and repair some of the bad feelings. Continuing, he said that he was on the road and had just gotten a ride from a trucker who had "molested him." At this, he laughed nervously. Maybe he'd try calling me again later, he said, and hung up.

Though it might make me as bad as he, I must admit that message, far from making me feel sorry for him, made me smile. It was the last time I ever heard his voice.