To celebrate Christmas, The Gryphon and I drove to Central Pennsylvania to spend time with my parents, my sister and her husband. 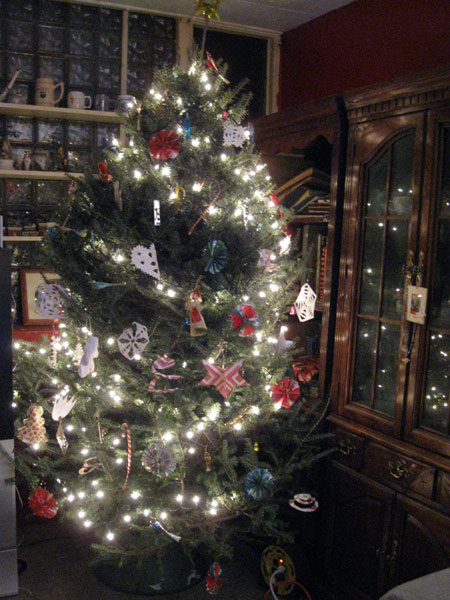 Our Christmas tree, decorated with
paper decorations and antique ornaments.

We arrived on Christmas Eve, in time for me to check on my first transcription assignment of the evening, which was a repeat.

All the others were, as well. Of course, since I didn't know this ahead of time, I had to stay home to check each of them, instead of attending Christmas Eve service with the rest of my family. I did get some time to socialize with them afterwards.

My sister and I decorated the tree, using some paper decorations we'd made a few years ago, as well as some antique ornaments that came from my paternal grandmother. 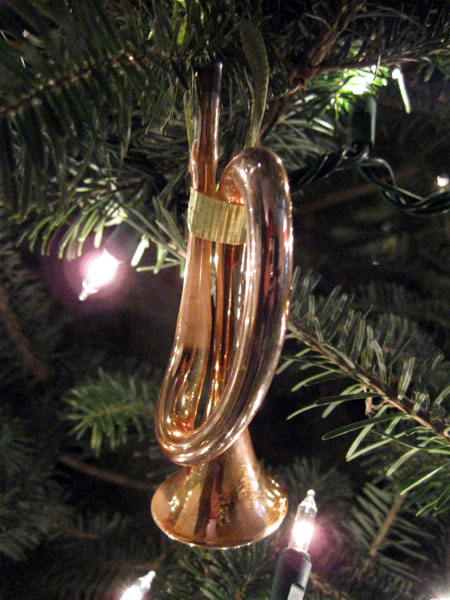 An antique ornament resembling a brass horn
hangs on our tree, lit by white lights. 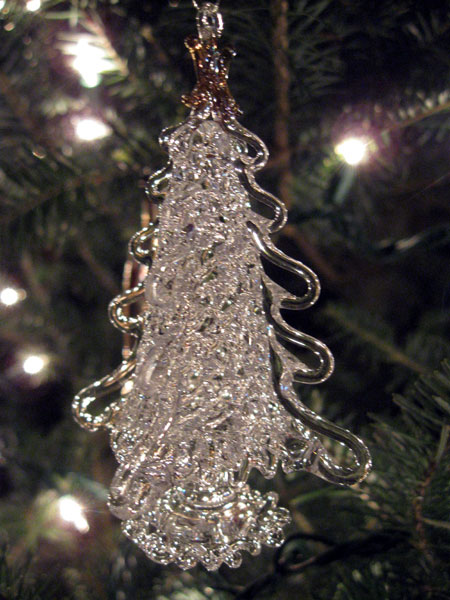 A crystal ornament resembling a Christmas tree hangs on our tree.

This year, we were blessedly not awoken at 3 a.m. by chanting and drumming outside our window, something which happened last year, apparently a tradition of some culture or another. From the languages and the voices I heard, I assumed it had been African. But this year, as I said, we got a good night's sleep.

I got up early and took Una for a walk around the downtown. She was experiencing cabin fever, since I hadn't walked her for several days. The snow had piled up in my suburban neighborhood, and many people didn't clear their sidewalks. This meant for the first several blocks, I had to walk in the street, a prospect I felt was not terribly wise, given I was about 17 weeks pregnant.

My hometown knows how to deal with snow, and their sidewalks were perfectly clear. Of course, I believe they also received less snow, since the snow primarily stuck to the coastline.

Una and I checked out the shop windows and holiday decorations, and I took some pictures. Here are a few. I'll share more later this week. 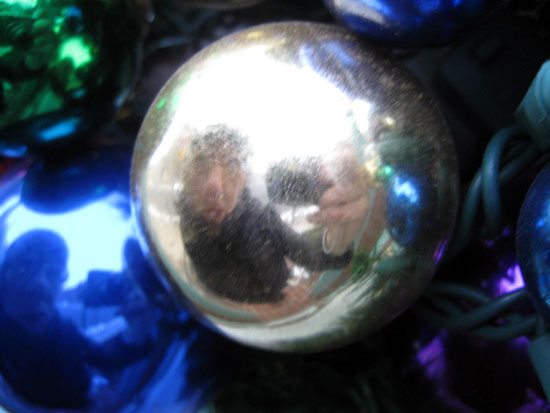 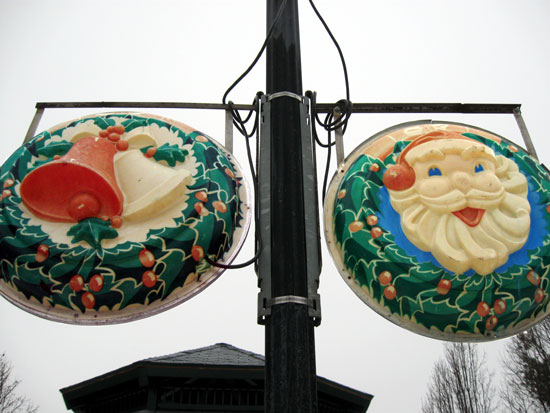 In a small park, these old, faded ornaments were on display,
perhaps a tribute to the past. They are two plastic circles,
suspended by a crossbar. On the left, a holly wreath surrounds a red bell
and very faded gold bell. On the right, a holly wreath
surrounds a faded Santa on a blue background. 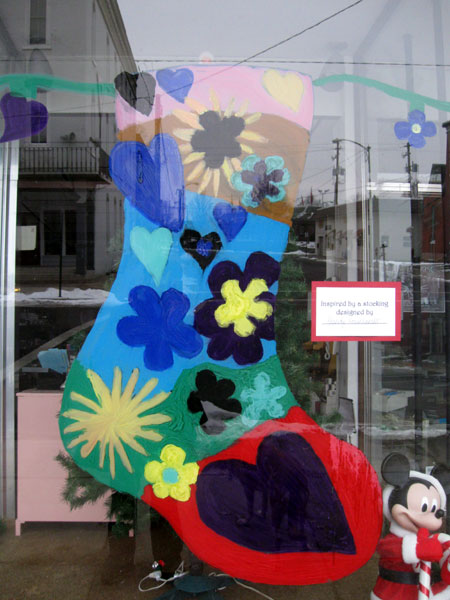 Stockings, like this one covered in hearts, decorated store windows.
They were based on designs by local children.

Back at Dad's place, everyone was getting up. My sister and her husband made us all a fantastic breakfast: English muffins with eggs, Canadian bacon and cheese. I helped make a fruit salad, which we did the easy way by using bottled fruit.

Traditionally, my family had always opened our gifts in the morning, but it's no longer possible to do that when two members of the family (myself and my dad) have to work in the afternoon. So instead, we did so afterwards. I might have had an easier time of it if CNN's block of repeats had started an hour earlier, but I did have to do my usual afternoon transcription assignment.

Meantime, Mom had arrived. She and my sister busied themselves in the kitchen, preparing two kinds of lasagna. Finally, I was done, and Dad (an osteopath and the primary doctor for a drug treatment facility) had returned, so everyone sat down to a late lunch/early dinner: a traditional lasagna and a white lasagna, along with a fresh salad.

Then came the present opening. We gathered in the living room and parceled out the gifts, then went around the room in a circle, each person opening one gift at a time. This way everyone gets to see their gift being opened and see the reaction. We had all pared down on our gift giving a little, which meant there were fewer presents to open but just as much good spirit. The running joke this year was that, whenever opened something that resembled a book, or resembled a present that someone else had already received (such as the specialty foods Mom had bought for everyone), the gift opener joked that they hoped it was a sled or a skateboard.

This would have been even funnier if someone HAD received a sled or a skateboard!

Dad likes to give people one large gift, while my mom likes to parcel her budget out over many small gifts. So my Dad's primary gift to me was a JVC HD Everio GZ-HM200 video camera. This way we can videotape important baby milestones and share them with the whole family. While the camera wasn't the brand we might have requested if he'd asked us, after my initial experiments with it, I'm pretty happy.

The one-touch upload to YouTube boasted about in the instruction manual doesn't seem to work, but it's a relatively matter for me to convert the .MTS files into .MPEG files using the excellent shareware program Xilisoft, which I'd purchased about a month ago in order to convert my video of the theremin player at Philcon. I have the Xilisoft Video Converter Standard, which is one of the more reasonably priced options.

Of course, I couldn't use the video camera that day, since I had to charge the battery first. I'll share some video tomorrow.

For The Gryphon, Dad got a Garmin GPS device, a nod to the fact that The Gryphon typically serves as my navigator when I'm driving.

Mom got me a beautiful little yellow baby sweater, knitted by her friend, The Pastor (started before she knew which gender we were expecting). In addition, Mom gave me a beautiful bracelet and a clutch, both from an organization that supports third-world artists. I'm told that The Pastor is working on a sweater for me, which will hopefully fit me by next winter, since it is based on my pre-pregnancy measurements.

Mom gave The Gryphon some nice kitchen items, along with a cook book and a couple other small items. He's the one who truly loves to cook, while I just do it out of necessity. She also gave us some specialty food items, which we're looking forward to sampling.

My sister and her husband gave everyone books. For me, they gave me the book Baby Bargains, which I was very excited to receive, since it had been recommended by some friends. For The Gryphon, they got him one of the Top Chef cookbooks, an excellent choice. Can't wait for him to make me some of those recipes!

My brother and his family had sent us each a special package of coffee from Green Mountain Coffee in Vermont. They were thoughtful about their choices and sent a selection of decaffeinated coffees for The Gryphon and I (since I can't drink a lot of caffeine during my pregnancy). 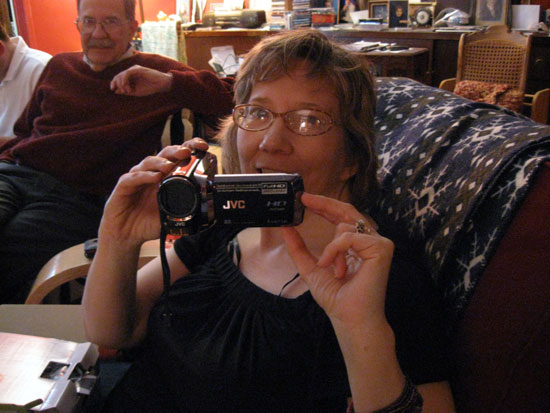 Me with my new JVC HD Everio GZ-HM200 video camera.
Dad watches me in the background, smiling. 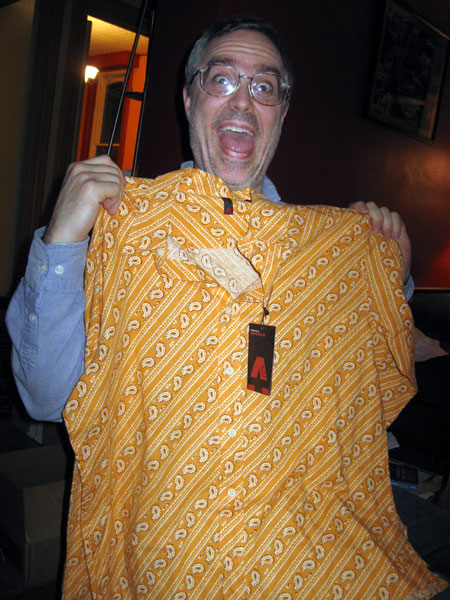 The Gryphon is way too excited about a gold paisley shirt
I gave him to replace his fave paisley shirt, which just wore out. 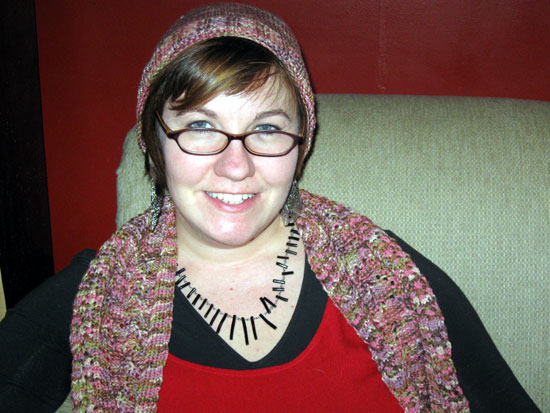 My sister shows off her multicolored rose scarf and hat set from Mom. 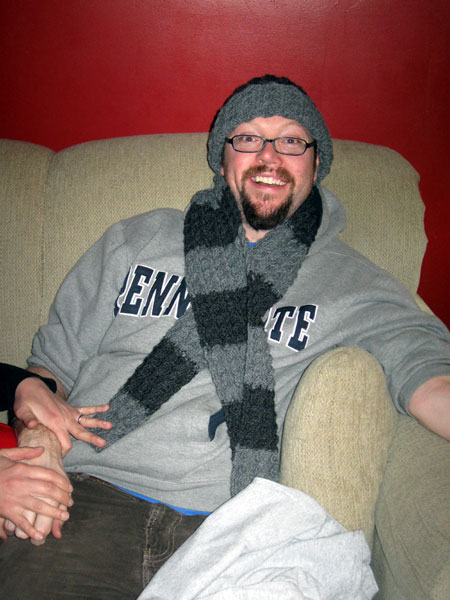 My sister's husband models a gift from Mom:
a new gray-striped scarf and hat set.

After we opened the gifts, we had some pie: apple or pecan. Then, of course, people tried out their gifts, like board games or electronic devices. I flipped happily through my Baby Bargains book.

We sat down to watch Night at the Museum 2: Night at the Smithsonian. My 7 p.m. transcription assignment was a repeat, and I fully expected the entire night to unfold similarly. However, when I checked at 8:30 on my usual FOX show, the night editor asked me if I could help transcribe some breaking news. Apparently, a young Nigerian man had attempted to set off a bomb on a transatlantic flight landing in Detroit. There was wall-to-wall breaking news the rest of the night, so I ended up doing as much work as I normally would have.

Moral:
It's all good as long as it's with family.