The day after Christmas was a day for quiet family time. I didn't have to work, meaning I could spend more time socializing.

I wanted to try out my new video camera, a JVC HD Everio GZ-HM200. Since the battery was charged, we could finally see what it did.

The Gryphon read through the instruction book and got a handle on it, then shot our very first video with the camera: me doing some basic tricks with my sister's dog, Emma (on the left) and my dog, Una (on the right).

My sister wanted to get out of the house, so after a breakfast of bagels and lox, we called up Mom. The three of us spent a little girl time together.

First, we stopped at a natural food store we all love. They were having a special promotion. A sign inside the door said that if you knew the holiday invented on Seinfeld, you could go to the front counter and tell him, winning some chocolate. So when we checked out, my sister and I both told the owner "Festivus" and got our free chocolate.

I bought some natural shampoo and conditioner, along with some bar soap made from olive oil. I've been thinking I should cut back on the chemicals I'm using while pregnant. I also picked up a bag of sesame sticks, a personal favorite. We used to call it "people kibble," because it resembles the dry food you give a pet. It is, however, much tastier.

From there, we stopped at a little pet store nearby to look for something for my mother's dog, who has some really bad skin irritation. They didn't have anything, so we resolved to look elsewhere.

We stopped for lunch at a little bar/restaurant that my a friend of mom's had recommended. The lunch prices were a little high for that area but a good price for Philadelphia. I had a crab cake sandwich with a side salad. We liked it enough that we all agreed we would eat there again. 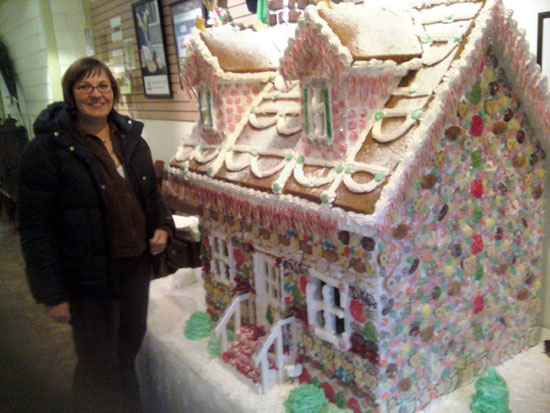 My sister stands next to a large
gingerbread house at the bar/restaurant
where we ate lunch the day after Christmas.

Finally, we stopped at the super Wal-Mart, which tends to be the go-to place in my hometown for just about everything. I needed a camera bag for my new video camera. After checking out the various options, I selected a Sony bag that had plenty of room for both the camera and the accessories, including the power cables.

My sister found herself a new hair dryer, since hers had just died. While my mom was off looking for some things, my sister and I browsed the baby clothes department. We found a really cute little boy outfit, perfect for spring or early summer when our baby will be born. It's got a pale blue and white striped top, with light blue coveralls and buttons to make changing diapers easier. Each leg has a little bear on it. One says, "Happy" and the other says "Silly." It was only $5, so I bought it. Our baby's first outfit!

For a little while, we stopped in at Mom's place, and I met her new kitten, named Andy. Originally, he was supposed to be named Andrea, but then Mom discovered he was a boy. I shot several short videos of his. This one is the best, showing her posing for the camera and then investigating a couple of his toys. In the background you can hear Mom and her friend The Pastor, checking out a recipe they intended to make. The Pastor is the one with the infectious laugh.

Back at Dad's place, the guys were enjoying themselves with a little down time. I don't think any one of them would have rather gone shopping with us.

Dinner was leftover lasagna along with leftover salad and a turkey meatloaf provided by Mom. For dessert, we had pumpkin bars, baked in late afternoon by my sister, along with vanilla ice cream.

We intended to go to a movie afterwards, however the timing didn't work out. We were took late for the earlier showings, and the later showings didn't start until the 10 p.m. hour, which was too late. Instead, we stayed home and watched a PBS special on the development of the human brain. My sister had rented it from her local library.

Afterwards, my sister suggested playing a game. When we couldn't find enough takers for Cranium, we played Monty Python Fluxx instead, a card game with ever-changing rules. This was a great choice. Everyone played except for The Gryphon (and Mom, who went home because she tends to go to bed earlier). We had a good time laughing about the different rule changes imposed by the players and the silliness that ensued.

That was our last full day with family, since we headed home on Sunday afternoon. But we did get to spend time with everyone for at least several hours before packing up and hitting the road. 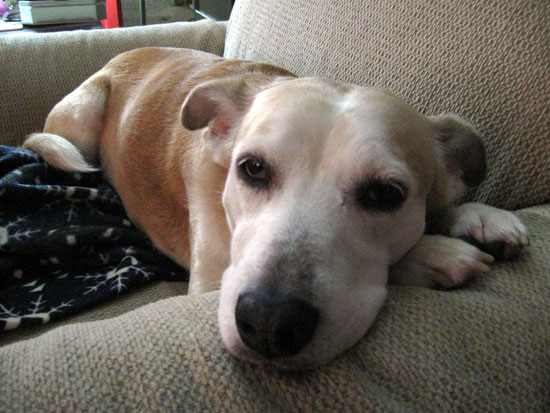 My sister's dog, Emma, relaxes on one of Dad's armchairs.

Moral:
Kittens don't have to try very hard to be cute.