Riffing in the New Year

To quote my friend The Court Wizard, "Is there a better way to spend New Years' Eve than alongside some of your closest friends, watching bad movies with the aid of the Cinematic Titanic guys?!!" 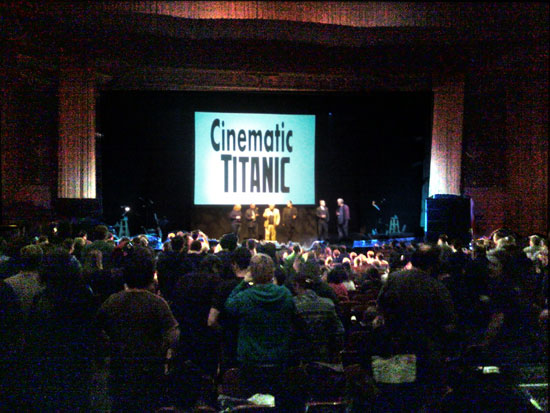 The audience and the crew of Cinematic Titanic
celebrate the turn of a new year with a champagne toast.

After casting about for ideas of how to celebrate NYE, now that the White Rabbit's party had become a New Year's Day party, my husband, The Gryphon, and I bought tickets to the event at the Keswick Theater. These were the creators of MST3K, doing what they do best: riffing on bad movies. The evening's festivities included three execrable movies and a champagne toast at midnight.

We arranged with our friends to meet early in front of the theater and go to dinner at a nearby restaurant/pub. In addition to The Gryphon and I, attending were The White Rabbit, The Cheshire Cat, The Dormouse, Batman, The Court Wizard and My College Roommate's Ex.

The pub was crowded, but they seated us right away. Serving us took a little longer than we'd expected, in part because the wait staff kept confusing our order. Apparently, they mistook our group of seven men and one woman, sitting at a counter, for a man and a woman sitting at a nearby table. Easy mistake.

During dinner I chatted with The White Rabbit about topics ranging from my pregnancy to the questionable practices of Adolf Hitler's personal physician, who prescribed the Fuhrer a medicine containing strychnine as well as, possibly, methamphetamines. These prescriptions could explain his deteriorating health and growing paranoia.

The Gryphon interjected: "How did you get from strange ladies touching your belly to Hitler?"

I explained that's just how our brains work.

Shortly before the show was to start, nearly the entire bar emptied. We made it to the theater with a few minutes to spare. Since The Gryphon and I had bought our tickets late, we were in one of the back rows. I was fine with this. But when I noticed that our seats were in the middle of a large row, I muttered, "Oh, no. This is going to be rough." Now that I'm pregnant, I have to use the bathroom more frequently, and I've always had a small bladder (just ask The Gryphon).

The usher told me there would be intermissions, and I resigned myself to the fact that I'd have to bother a row of people every time I needed to go between intermissions.

While I was standing in the aisle waiting for The Gryphon to return from the men's room, the usher returned and asked me if I'd like her to see if she could get me an aisle seat. I told her that would be great. She introduced me to the manager, Oscar, a tall guy in his 20s with sandy-colored hair. He consulted his seating chart for unsold seats and moved us to aisle seats just behind the sound board, in the middle of theater. Just in case somebody questioned us, he made a special notation on my ticket and signed it.

In addition, he told me I could use the handicapped restroom near the snack counter, rather than going all the way upstairs every time.

Although I was a little embarrassed about the special treatment, just like my proud Polish grandfather would have been, I was exceedingly grateful for their consideration. As it turned out, I did need to run to the restroom at least once during each film, in addition to going during intermission. Thanks to our new seats, I could come and go without disturbing anyone.

With that settled, we could relax and enjoy the show. Or at least, enjoy the jokes, because the movies themselves were far from enjoyable. First was an opening set by Dave "Gruber" Allen, a.k.a. Jeff Rosso on Freaks and Geeks (or so I'm told). He did an ambitious piece that involved talking about the history of the last 10 years of music over a pop song, occasionally singing portions of the other songs during the instrumental sections. It worked surprisingly well.

A little later, he performed with Josh Elvis Weinstein and Frank Conniff. They did a theme song for a proposed TV show, Convoluted Man (VIDEO HERE from another performance).

The first movie on the bill was a lamentable Japanese movie from 1968 called Konchu daisenso, which was first released as Genocide in the U.S. and then retitled Attack of the Insects. If only they had changed more than the title.

Attack of the Insects was ostensibly a monster movie except without, you know, monsters. Instead, the culprits of this movie are genetically-modified bees, developed by a mad scientist seeking massive calamity for some undefined purpose. Of course, the apiary actors struck me as rather innocent and normal, buzzing around in their glass containers in the scientist's lab, wondering where all the flowers had gone. The scariest moment was actually more fascinating than anything else: a super close-up of a bee biting (yes, BITING) what appears to be human skin. With crunching sound effects. It was, I believe, a hornet rather than a bee, and I found myself wondering whether it was real human skin or some sort of fake and how they managed to persuade the poor insect to chomp down on it.

Basically, this movie could only be scary to someone suffering from apiphobia. Or perhaps someone who had a phobia of really bad movies.

The Cinematic Titanic crew (OFFICIAL SITE)— Conniff, Weinstein, Mary Jo Pehl, Trace Beaulieu and Joel Hodgson — sat on either side of the screen and riffed on it throughout. They were in fine form, with recurring jokes involving one of the characters being a womanizer. Since they no longer need to worry about broadcast regulations, they made some off-color jokes and even used the occasional swear word. This was also easier for them to get away with, since they were not in character or using the famous MST3K puppets. No risk of offending loyal fans, in other words.

Even when they messed up, they were funny, with Mary Jo botching a few lines and the rest of the crew teasing her. Then, she got in a particularly funny reference to Citizen Kane. In a flashback showing one of characters screaming, "Genocide," she said, "His sled was named Genocide." The audience erupted in raucous applause for several seconds, and Pehl took a little bow.

During the intermission I caught up with the rest of our friends and waited in line with them at first the drink counter and then the snack stand. They were having a good time, and we made our own jokes about the movie we'd seen, including, I'm sorry to say, some really atrocious puns.

The next instrument of torture was an Italian film from 1961, titled Maciste alla corte del Gran Khan, or Samson and the Seven Miracles of the World. The movie stars Gordon Scott, who starred in six Tarzan movies in the 1950s and early 1960s. From looking at his filmography, he made a career as a B-movie hero in "sword and sandal" epics, seldom donning a shirt. He also had been quoted as saying, "Tarzan was ideal for me because I didn't have too much dialogue." At least he knew his limits.

Sadly, though, the makers of this movie failed to utilize his strengths (pun intended). Scott struts about in a red loincloth, permanently sucking in his gut, even while his character is assumed dead. Occasionally, he gets to make pained faces while straining to lift large rocks clearly made out of Styrofoam, but other than that, there's not much for him to do.

In a truly comic scene, he jumps on the back of a chariot and slows it to a halt by dragging his feet. Fred Flintstone has nothing on him.

And what about the seven miracles of the world, you ask? As far as I could tell, the only miracle here is that somebody actually funded this movie.

The running jokes from the Cinematic Titanic crew throughout this movie centered on Scott's physique and scanty wardrobe. For example, as a crowd of people in a bar turn to stare at Samson, one of the crew said, "Please ignore the tall, naked foreigner."

By this movie, The Gryphon was starting to get truly tired. I was doing better, since I'd had a nap. I did notice a number of people wearing their coats and apparently heading out. This struck me as odd, since it was only about 20 minutes until midnight. But I guess some people don't care about celebrating the turn of the year.

The concession stands sold champagne for whoever wanted to participate in a midnight toast. I stuck to ginger ale, of course. Just before midnight, the crew came back on the stage and did a countdown. At the stroke of midnight, they raised their glasses to the new year, and the audience did likewise. There were a few noisemakers, brought in from outside, and a lot of good cheer and frivolity.

Little did we know we would soon be subjected next to a 1971 horror of a horror movie, Legacy of Blood (Joel's review of it and a video clip can be found here). In order to inherit their share of a family fortune, four heirs, their spouses, and a couple of domestic staff spend the night on the estate of wealthy Christopher Dean (John Carradine, whose role is restricted to a few flashbacks but who is still the best actor in the film). Everything seems fine (well, aside from the seething hatred between the characters and hints of unrequited incestual attraction) until someone begins killing off the guests, sometimes in creative ways. Let's just say: stay away from the ham.

Like The Gryphon beside me, who had slept through portions of both of the first two movies, I watched the movie from the inside of my eyelids for a while in the middle of the film. I could, however, hear all the jokes and could figure out from that what was happening. When I opened my eyes to see the last third of the movie, I wondered if it might not have been better to keep them closed.

Truly, this is one of the worst B-movie horror flicks I've ever seen, and I watched quite a few during my vampire phase. From a meandering plot to terrible special effects to laughable flashback sequences, the film qualifies as an epic fail.

Recurring jokes for this movie revolved around the hints of incest and the obviously low-budget sets and props. I think that it was Joel Hodgson who summed it up for everyone when, at the close of the film, as the killer talks directly to the camera, he said, "F*** you and f*** this movie."

The evening, however, was far from an epic fail. Instead, it was six hours of laughs with a crowd of like-minded folks. One of the more civilized and pleasant New Year's Eves I've ever celebrated. Well, except for the mutated killer bees, naked foreigners, incest and murder.

Moral:
It's possible to be so bad it's good; these movies, however, were not.