On New Year's Day, The White Rabbit threw a party. This was instead of his usual New Year's Eve party, since he missed that to attend the Cinema Titanic performance. He spread the celebration out over several days, so some of our friends attended on Saturday when we weren't there. 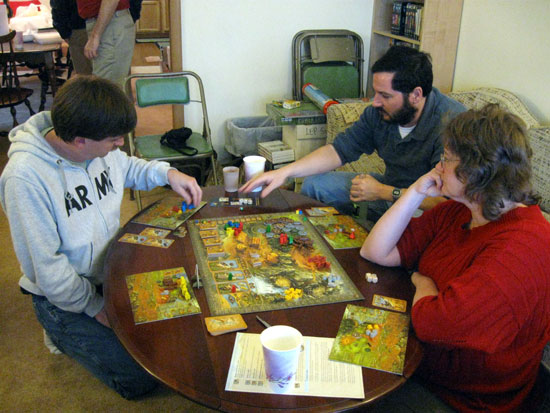 (from left) The military veteran, The Devil's Advocate,
and The Cousin play a board game.

The Gryphon spent the morning cooking up a turkey breast we'd received from the grocery store around Thanksgiving. He sliced it up, made some turkey gravy, and we took that as our contribution.

We arrived in the late afternoon, around 4 p.m., which was a good time to be arriving with extra food. The party was already underway.

In addition to The White Rabbit, The Gryphon and myself, the guest included The Cousin, her husband The Photographer, and their two daughters; The Fruit Lady and her daughter; The Devil's Advocate; Batman; The Cheshire Cat; The Court Wizard; The Con Ops Guru; The Treasurer; Batman's Roommate; My College Roommate's Ex; The Dormouse; and a college buddy of The White Rabbit's, along with his wife. I remembered speaking to him at another party, where he had regaled me with stories of his military career.

Several people were deep into a complicated board game. I've played it before but can't remember what it was called (see picture above).

I, however, stuck to socializing with various people about whatever subjects arose. For the moment, they escape me, but I'm fairly certain they ranged from my pregnancy (always a topic any more) to pop culture and current events.

At one point, I did get talked into playing an even more complicated card game with a space conquest theme called Race for the Galaxy. This game was rather frustrating for me, because I had a lot of trouble figuring it out. The rules were fairly easy to follow, along the same lines as other German-based board games, where each round of play has several stages involving several activities. The problem was the cards, which all had special characteristics, indicated by symbols that were difficult to understand.

In fact, they were so difficult to understand that when I sought explanations from The Treasurer, who had bought the game, he often needed to look at the card to figure out what I meant!

Even though I believe I played that game once before, perhaps with help from The Devil's Advocate, who is good at aiding new players with strategy in complicated games, I don't think I'll be playing it again any time soon. 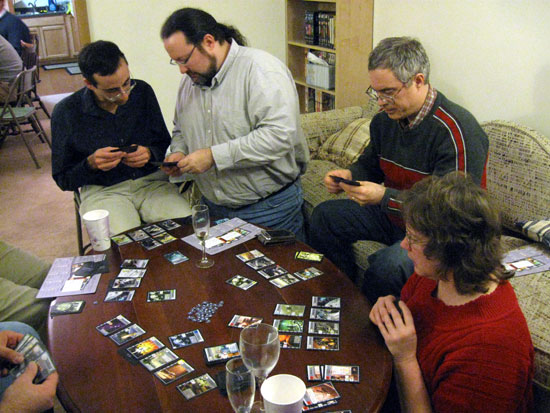 (from left) The Court Wizard, The Cheshire Cat,
The Gryphon, and The Cousin play Race for the Galaxy.

As another group of people, including The Gryphon, launched round two of that game, I got into a conversation with some people at the table. Batman's Roommate wanted to know what names we were considering for our baby boy. I told him, and that led to a big conversation about baby names with him, The Devil's Advocate, The Con Ops Guru, and The Big Kahuna. All of them had multiple ideas, some of them serious and some of them serious. None of the, however, sounded better than the name we are considering. 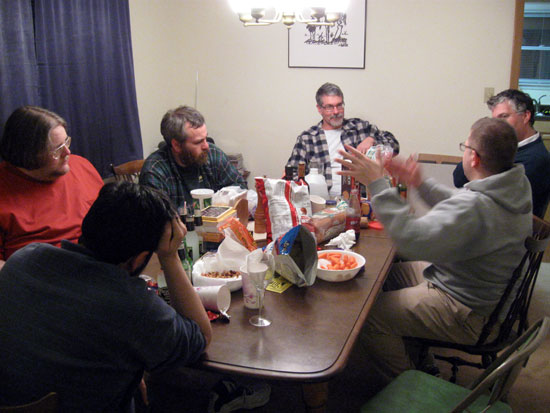 (clockwise from left) The Devil's Advocate, The Con Ops Guru,
The Big Kahuna, The Photographer, My College Roommate's Ex,
and Batman's Roommate converse around a table filled with snacks.

A little later, I moved downstairs, where The Cousin's two daughters were watching a DVD of The Simpsons from the '90s. These were episodes I had not seen, probably because I was in either college or grad school and didn't have a TV. The shows had a lot of topical references, some of which the teens didn't get. For example, they'd never heard of Kim Basinger. I explained she was a very popular actress in the '80s and '90s but hasn't done a lot in the last ten years.

The military veteran had brought an old laptop he was trying to unload. I'm not sure exactly how old it was but probably was nearly on 15 or 20 years, still in its original box. Despite his best efforts, he could not convince anyone to take it. I suggested he find out if there's a computer museum in the area. Or maybe sell it on eBay. 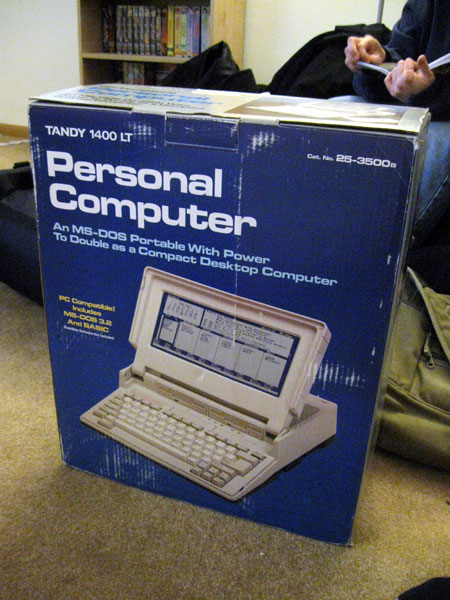 There were no takers for this Tandy 1400 LT laptop computer.

The White Rabbit had wanted to do a champagne toast at midnight, but most people were clearly getting tired by about 10, many of them having stayed up the night before. Instead, he served the champagne early. I had a virgin mimosa, consisting of orange juice with ginger ale. It tasted very similar to the real thing.

At about 11:30 or so, The Gryphon and I left. It had been a very relaxed party, and it was good to spend time with many of our usual NYE companions.

Moral:
New Year's Day can be just as much fun as New Year's Eve.