My Fave Kind of Weekend

This weekend was one of my favorite types: where I get to cross things off my list of things to do, and also have some fun. Saturday, The Gryphon and I got up fairly early, which was a good thing.

A friend from grad school,

thenew20s37, called me at about 10:30. She was in town because of a family situation and was about to head out. Before she left, she wondered if we could get together. Since The Gryphon and I were about to get brunch, I invited her along. He gave her directions to meet us at the Llanerch Diner.

Of course, we were a little late, because the car wouldn't start the first few times, maybe because of the cold.

I hadn't seen this particular friend for about six or seven years. She's married now and just got back from a belated honeymoon, traveling out west. We got caught up on each other's lives, which left The Gryphon little to contribute. He didn't seem to mind. 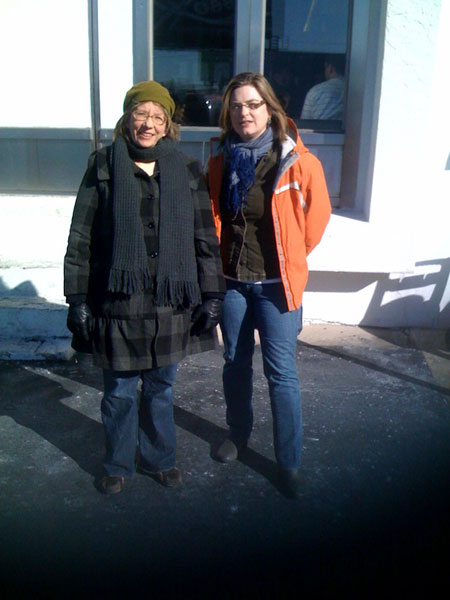 Me my friend in front of the Llanerch Diner.

Next, we stopped by my car dealer so they could test the battery and see if there was a problem. Being a Saturday and a bitter cold day, many other people with problems had arrived first. We had to wait more than an hour for them to test it, and they told us it was fine. The mechanic suggested we see if it happens again and, if so, have them take a more thorough look.

Since it was about 2:30 by then, and the place where we buy Una's food was closing at 3, we zipped up there next. After that, we stopped at a place called Kid to Kid, which offers second-half children's clothing, baby and kid gear, and maternity clothing. I needed some warm sweaters.

They had more of a selection in my size (usually S or M) than any used store I've seen. There were only a few that looked warm enough, but they both worked. I bought a zipper-front black cardigan sweater (which, amusingly, has red hearts on the sleeves), along with a light red polarfleece shirt, good for layering.

Our final errand was to stop at Babies R Us, to check it out as a place where we could set up our baby registry. We walked through the store, to get a sense of the merchandise they sell and the big items like a car seat, crib, and stroller.

For dinner, since we were in the mood for Mexican food, we ate at one of our favorite restaurants, Taqueria La Michoacana in Norristown. They were showing an old SF movie (or perhaps TV show) in Spanish, where people were wearing silver jumpsuits with matching headbands, and Mexican wrestlers were the heroes. I had a dish with chipotle sauce, shrimp, peppers, Spanish rice and avocado. There was so much I took half of it home.

We had thought about seeing Sherlock Holmes, but when we got to the theater I thought about how long we'd been out and the fact that Una hadn't had a chance to go out or eat in that time. So we went home instead.

On Sunday, we slept in. I took some photos of Luke for his ACDC foster mom. We'd been in communication lately because of a dog found by a friend of my pet sitter, and I'd promised her some recent pics.

Soon after we awoke, we called The Dormouse, to see if he wanted to catch a matinee showing of Sherlock Holmes and to arrange a time. His father was buried on Friday, and we thought it might be nice for him to get out of the house and have a little fun.

The Gryphon made us breakfast of some light "red-hot" pancakes, along with veggie burgers which he seasoned to taste like sausage. They were delicious.

After breakfast, we got online and signed up for the Babies R Us registry, beginning to put some things on it with the help of the Baby Bargains book my sister and her husband gave us for Christmas. Some items, though, will require further research or an in-person examination before we add them.

That means we are well on the way towards crossing off another short-term goal from my 2010 resolutions:

* Short-term Goal: Figure out where to create our baby registry and add items.

We should complete adding most of the necessities by next weekend.

Although we got to the movie theater a little later than we'd planned, we had no trouble finding a good seat on the aisle.

I don't know if Sherlock Holmes is destined to become a cinema classic, but it was a lot of fun. Over the years, I've seen many adaptations of the Sherlock Holmes stories, many of which I've seen. There are a few things in this version that stray from the canon, such as having Holmes and Watson scrapping with bad guys. This didn't bother me terribly much, but I'm not a hard-core Holmes fan.

Director Guy Ritchie used some interesting techniques, such as rapid-fire flashbacks and flash forwards, which were like seeing inside Sherlock Holmes' mind. I liked the idea that, compared to everyone else, his brain was in fast motion and that he could link several thoughts or observations in the blink of an eye. Never before had I see an adaptation that tried to get inside how Holmes' really thinks.

Of course, the costumes and settings were detailed, with almost a steampunk feel to some of it that I'm sure will go over well with that crowd. You may see some cosplayers imitating Sherlock Holmes at this summer's fan conventions.

The lighting gave it a more realistic feel than many adaptations, which tend to adopt a three-point, almost flat, television-style lighting. Ritchie, instead, made use of natural light as frequently as possible, with deep shadows heightening the drama.

Frankly, all the hoopla about the homoerotic subtext is, I believe, overblown. It's subtle, if it's there at all. These two men clearly have a bond that's so close it's hard to define by any other normal relationship. They seem to share a mind: can finish each other's thoughts, anticipate what the other will do, and they've lived intertwined lives so that they sometimes argue like a stereotypical old married couple.

I'm not convinced, however, that's so different from many close male friendships. In modern times, it's acceptable to clap someone on the shoulder or give them a big bear hug, but I don't think that was socially acceptable in Victorian England. These are two men, closer than friends, perhaps closer than brothers, who share a bond forged by mutual adventure.

Overall, I really liked the movie. Of course, I do love Robert Downey Jr. in just about any role, but until now, I've never really seen the appeal of Jude Law. Now, I can see his potential as an actor. By the way, his mustache was fab. Maybe it was a magic mustache. He should look into wearing one for all his roles.

Once we returned home, I got to cross something else off my resolutions 2010 list:

* Short-term Goal: Look at Amazon.com and compare it to Lightning Source as a POD publisher.

Amazon.com had been recommended to me by The Cheshire Cat, who said he's going with them for his next self-published book. I was pleased with what I saw about their POD (print-on-demand) services. The only problem was the layout of the site: the information was spread out over several pages instead of in one large FAQ. You had to go digging for answers to various questions, but all of the important information (such as fees, royalties, pay schedule, specs, and process) were there.

I compared their prices with the quote I'd received from Lightning Source and did some number crunching. If I knew that I were going to sell 100 or more books, I'd be better off with Lightning Source, but Amazon.com is a better bargain if you don't know how many you'll be able to sell. There's no setup fee, and they provide a free ISBN number, so you don't need to buy a pack of 10 for $300, which is how you must buy them if you go directly through the government.

In addition, Amazon.com will list it and distribute it, with no further action from me. This will be much more convenient, meaning that I don't have to do anything except for work on marketing.

Amazon.com also offers the option of distributing to retail outlets and bookstores through them, which is something I might consider doing, as well.

Still, The Gryphon advised me to make certain I haven't missed anything important, so my new short-term goal will be:

* Short-term Goal: Read through all the fine print for Amazon.com's POD services and make certain I want to use them.

Moral:
Some guys DO look better with a mustache.