Once a year, the Otakon staff get together for a weekend-long retreat of madness, mayhem and meetings. This retreat is called Com Con, for reasons lost in the annals of corporate history. I suppose I could have asked The Devil's Advocate, one of the Four Fathers who started this nonprofit educational enterprise 16 years ago. But I was too busy socializing and networking to worry about etymology.

My husband, The Gryphon, and I joined the festivities Friday evening. 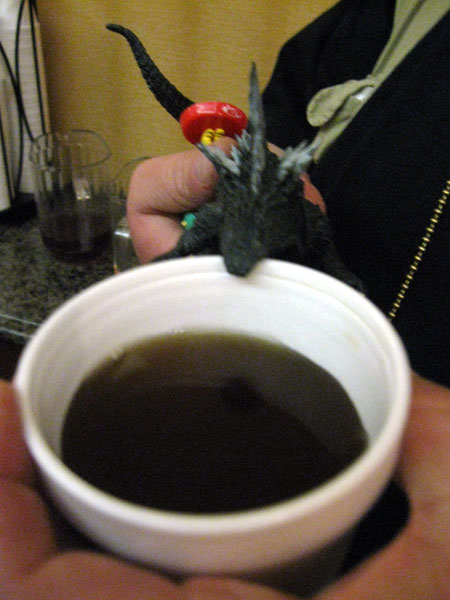 Sadly, we missed the ice-cream social, which was only running until 8:30. I felt better about it later when I learned that the president of the organization missed it, too!

When we arrived, people were socializing in various rooms, some of them singing karaoke, others chatting quietly, still others enjoying drinks at the bar. I had brought my video camera to shoot some stuff for The Bodyguard, who I am so naming because of his time-honored position as the unofficial security detail for the Treasury Department at Otakon. Currently, he is serving in Iraq, and when I told him I hoped to record some video for him at Com Con, he told me he was eager to experience itvicariously.

I moved between different rooms and tried to get as much interesting video as I could, which included both The Mad Hatter and The Dormouse singing karaoke. I forgot to pull out my still camera very often, however, so there are few photos from Friday night.

Later that evening, The Gryphon and I were about to head upstairs when we ran into The Pirate. He was going out to get some food and wanted to know if we'd join him. We thought about it and said sure, then went upstairs to get our coats. By the time we returned to the lobby, the trip had become a full-on excursion consisting of 12 people, including Mistress Chimera and The Invisible Man. Being pregnant, of course, I'm a teetotaler, so I agreed to drive the rented van, since several of the available drivers had been drinking. The Pirate gave me directions and took off to pick up another person who was just arriving at the light rail station from out of town.

We barely squeezed everyone into the van, but there were no complaints. The van handled very well, once I got used to it. Fortunately, it was automatic. I've driven vehicles as large as a moving van, so I had no trouble. The Gryphon rode next to me as my navigator, sharing directions from the Garmin GPS that Dad bought us for Christmas (we had neglected to grab the bracket from our car).

The diner was fairly empty when we arrived, so the wait staff could easily put several tables together and seat us right away. The rest of our party showed up before we got our drink orders.

To make up for missing the ice-cream social, The Gryphon and I got ice cream with chocolate sauce. The late-night conversation was boisterous and rollicking, and I could scacely believe it was 3:30 by the time we left.

This might not have been the wisest move, considering we had a long day ahead of us tomorrow, but what would an Otakon experience be without sleep deprivation? 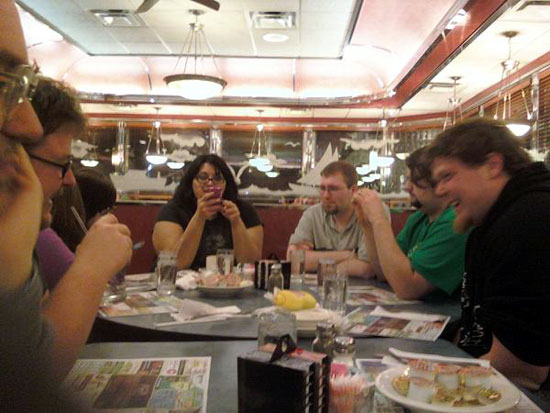 Our group enjoys food and conversation
at the Nautilus Diner.

Moral:
Just because you miss the ice-cream social, doesn't mean you can't have ice cream.