This weekend my husband, The Gryphon, and I attended Red Dwarf XIII, a Red Dwarf marathon hosted by my college friend The ER Doctor and her husband. The ER Doctor and I had met through the Penn State Monty Python Society. She's a former MPS president, like myself. Most of the rest of the guests were friends of her husband, who connected with each other through the Penn State Blue Band and through a music fraternity. 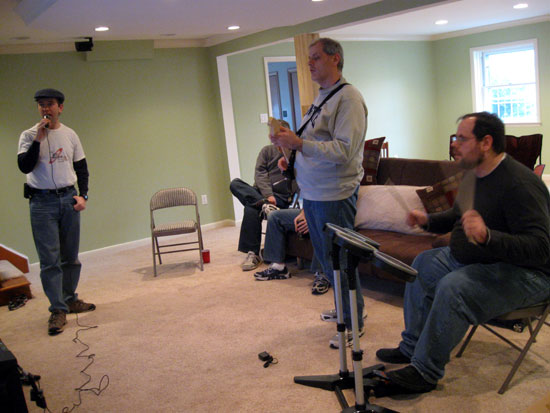 The ER Doctor and her husband have moved from downtown Harrisburg to a nearby town, but we had no trouble finding it, thanks to the Garmin GPS that Dad gave The Gryphon for Christmas. The party was supposed to start around "noonish," and we arrived at 1. The ER Doctor took us for the grand tour, starting with the downstairs entertainment room, where guests were busy pulling the blue tape off the recently-painted walls. The carpet had likewise been recently installed.

Their house was beautiful and roomy. I'd be happy with one about half that size! It would still be more space than the rented rowhouse in the Philly suburbs where The Gryphon and I now live. We're hoping to save up enough to move to a bigger place (or buy a house) within a year or two.

Following the tour, she let us go through some baby items and choose whatever we wanted to take with us. We got a couple items of clothing, some toys, a few maternity clothes, and some pregnancy workout videos.

As guests arrived, they congregated around the snacks in the kitchen. I know I ate far too many chips and cookies and such. I'm hoping that, like with Com Con the week before, I can make up for it by being good the rest of the week. So far this month, I've been gaining at a slower rate, and I don't want to have any rude surprises before my next doctor's appointment on Friday.

A bit later in the afternoon, The ER Doctor's husband set up The Beatles Rock Band downstairs, and that provided literally hours of music. No surprise, really, that this group of music geeks, most of whom had not been in the Blue Band and some of whom had formed an a capella group, would take to the game.

Of course, as soon as the two boys, ages 3 and 2, woke up, things changed. 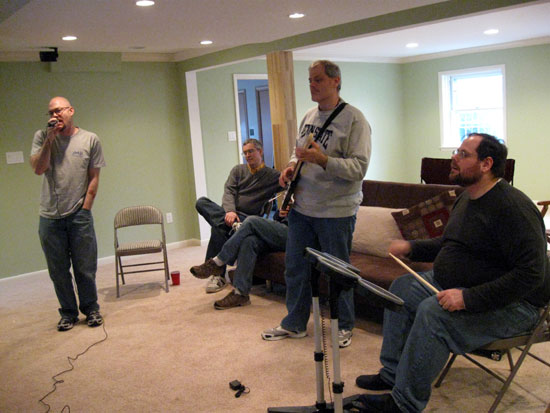 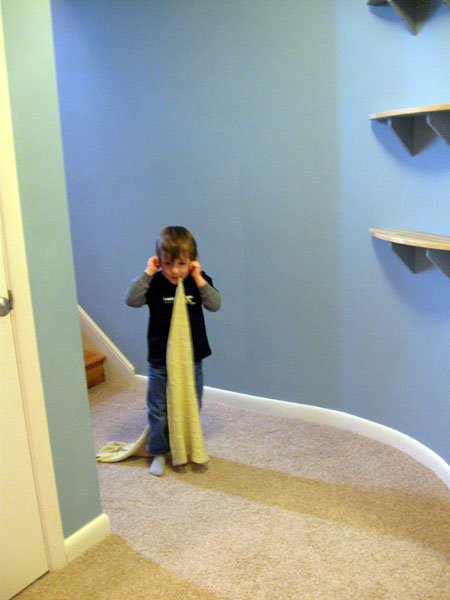 The ER Doctor's 3-year-old son
plugs his ears in response to Rock Band. 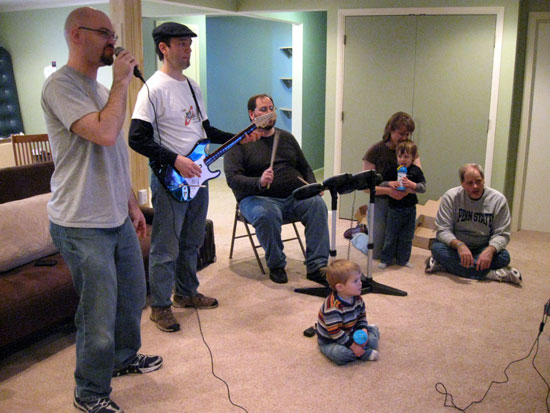 The ER Doctor joined us to soothe her sons,
who momentarily seemed content just to watch Rock Band. 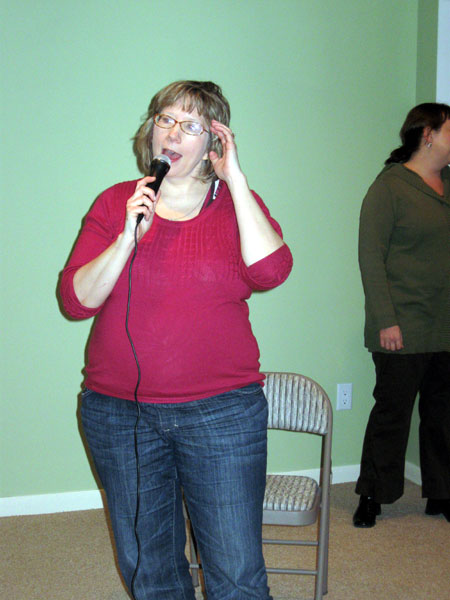 I take a shot at singing vocals.

The 2-year-old began to wail and cry, for reasons unknown. At first we thought that maybe he was upset by the loud music. Eventually, paying attention to his pleas of "Drums!" we thought that letting him play with an extra set of drumsticks would appease him. Being next to his daddy as his daddy played drums didn't help. Nor did sitting on his lap. The only cure for his ills, we learned, was to disconnect the drums from the game (so as not to throw off the score) and allow him to play to his heart's content.

"He'll be a drummer when he grows up," I predicted.

The ER Doctor's husband replied: "No, he'll learn music. He'll be a percussionist."

For now, though, he just wants to bang on the drums all day. 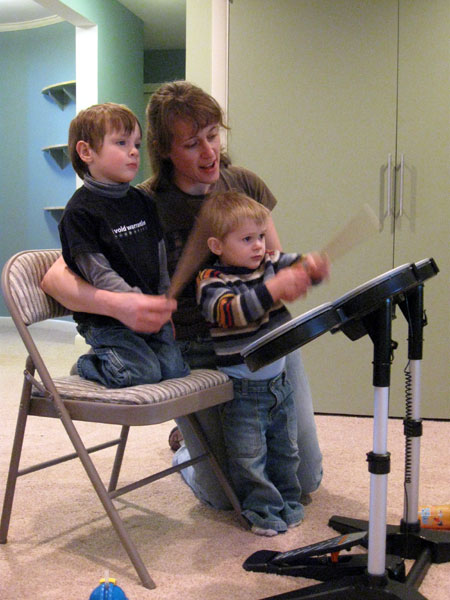 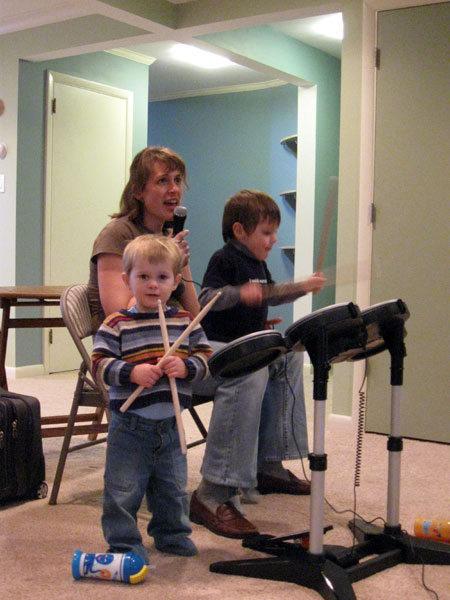 The ER Doctor sings vocals for a song while her boys play drums. 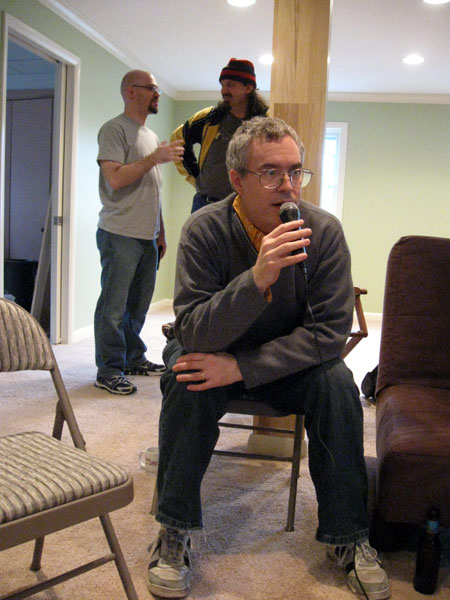 The Gryphon takes his turn on the mic.

Somewhere between 5 and 6, The ER Doctor moved upstairs to prepare ingredients for the make-your-own-pizzas, another tradition. With a little help, she soon had containers of about 10 different toppings that could be placed on top of a dough of choice, rolled out by the pizza maker. The resulting pizza was baked in the oven for 18 minutes and was, at least in the case of ours, delicious. 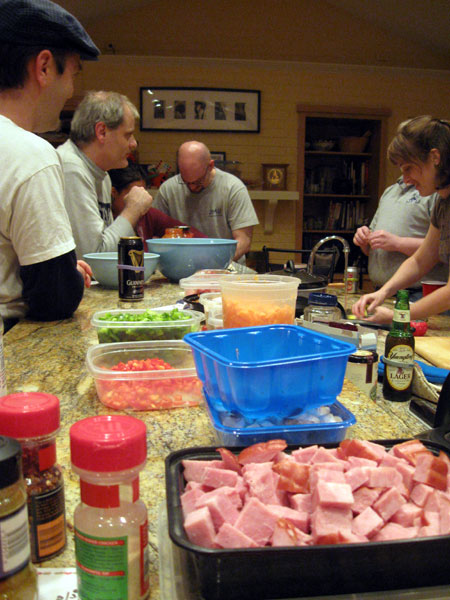 Guest gather around the assembly line of ingredients. 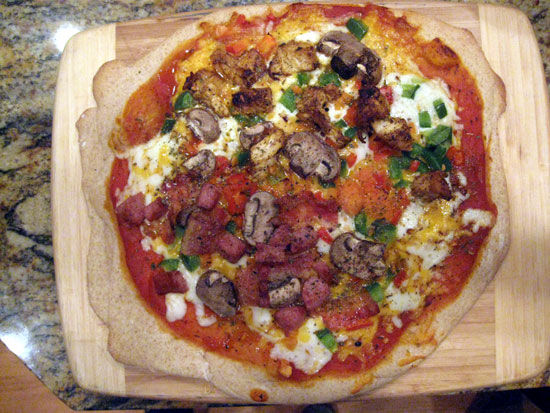 After making our pizzas and enjoying some dinnertime conversation, and after the boys were put to bed, the video watching actually began. At my request, we started with "Dimension Jump," an episode referred to recently in a blog entry by a friend,

norda. In this one, the cowardly hologram Arnold Rimmer encounters a heroic version of himself, Ace Rimmer, from a parallel universe.

The idea of the multiverse fit in very well with the next video we watched, "Back to Earth," which were the most recent episodes, released in 2009. We watched the director's cut of the three-parter, where the crew of the Red Dwarf come to present-day earth and discover they're characters in a TV show. I found it interesting that it also involved the idea of the multiverse, where every decision engenders two separate universes.

We followed that with "Quarantine," a perennial favorite, where Rimmer puts Dave Lister, the Cat, and Kryten in quarantine after they answer a distress call from a hologram who has become infected while working on viral research.

Following that episode, we watched a few other videos: two episode of The Critic (which had incredibly dated jokes but funny voice acting from Jon Lovitz), an animated pilot called The Amazing Screw-On Head, based on the comic by Mike Mignola (which was absolutely demented and compellingly odd), and one episode of a computer-animated cartoon which aired on the Cartoon Network, called Lucy, Daughter of the Devil (wrong, just flat-out wrong). 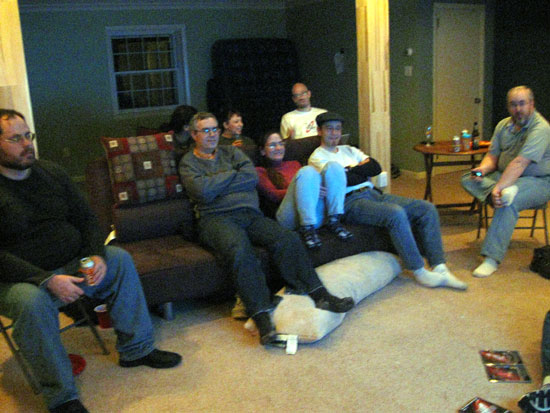 Everyone settles in to watch videos. 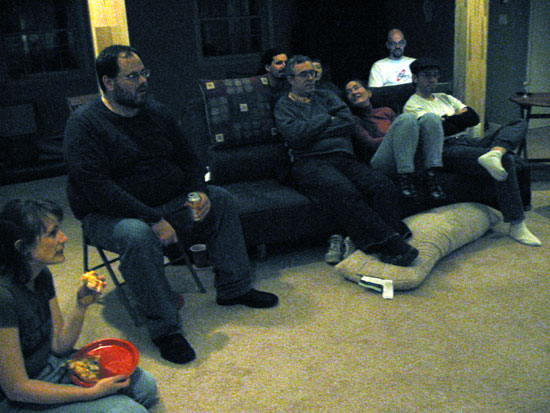 The ER Doctor (left) and guests watching videos.
The Gryphon is third from the left.

By this point, we were all getting tired, so we figured out sleeping arrangements. Because of my pregnancy, The Gryphon and I got dibs on the double bed in the official guest room. The rest took up residence on either air mattresses, the couch, or the fouton.

I slept very soundly until about 8 a.m., when I began to hear voices upstairs. I took advantage of the fact that no one was interested in the bathroom and got my shower, then went upstairs to check it out. 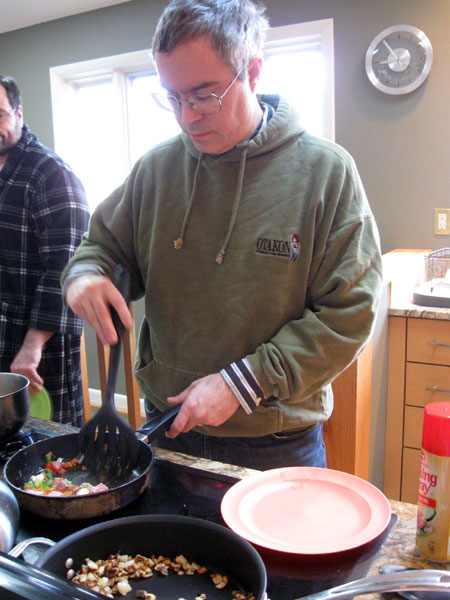 The Gryphon makes me an omelet for breakfast.

Breakfast, like dinner, was a leisurely affair, with me sharing a table with The ER Doctor and her two sons. I learned that the 2-year-old is not only interested in drumming but also avid about learning his ABC's and numbers. The 3-year-old is a bit shyer and didn't talk very much, leaving to watch a favorite video in the living room.

Speaking of favorite videos, our TV watching ended with a showing of Dr. Horrible's Singalong Blog, followed by "Commentary: The Musical," a DVD extra that included more original songs as well as plenty of humor.

Even the kids seemed to like it. The youngest was momentarily entranced, standing as close as he could to the screen and watching the video unfold. 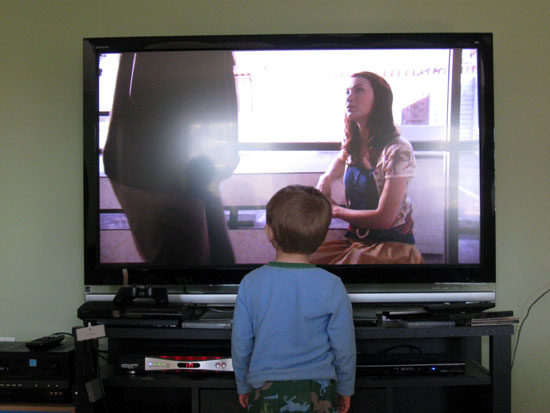 The 2-year-old stands in front of to the screen, watching the video.

By then, it was getting fairly late in the morning, and most people had long distances to cover to return home. We packed up, said our good-byes, fired up our roundabout, Moondancer, and headed back to earth.

Moral:
Kids know it's more fun to play than to watch.