This is my home-game entry for The Real LJ Idol. I am not competing this season but invite you to read the many fine submissions here. Topic number 13 is just like last week, a revisitation of Throwback Week, with several available topics. Once more, it's also Intersection Week, meaning we're supposed to work with another contestant, each choosing a different topic (and neither repeating topics they've already used), with the entries linking as much or as little as you like. I paired up with another home-game player.

I chose the theme "Moments of Devastating Beauty"

Once, I fell in love with a photograph. For hours, I'd stare into his dark eyes, this man who had been dead for decades. And yet, time and again, I'd turn the dog-eared pages until I found his face, as placid and perfect as when the photograph had been taken more than a hundred years ago.

Strictly speaking, the book was my mom's, but I picked it casually off the living room shelf to read it and soon added it to my bedroom shelf. Later, it moved with me to a new life, boxed with books I could legitimately call my own. Wisconsin Death Trip by Michael Lesy (Pantheon Books, 1973) is a fascinating compilation of photographs and newspaper blurbs from approximately 1890-1910. The photographs come from the collection of Charles Van Schaick, who left behind 30,000 images that captured the turn-of-the-century life of Black River Falls, Jackson County, Wisconsin.

In addition to competent portraits of families, individuals, and couples, there are also eerie photos of babies in their coffins (the only portraits their families would have) and of people who looked mentally disturbed. The local newspaper blurbs are striking, too, because they noted things we would never note today, such as suicides, or people being institutionalized.

But what intrigued me more than wild eyes or tragic infants was one photo of a young man in a black turtleneck. Like the other photos in the collection, he was unidentified: just a pale face rising above a sable sweater. He always seemed to me to be outside of time.

A time traveler or a gentleman farmer?

He looked like he could be from any age, and I often pondered his identity and his fate. A gentleman farmer? A college student, sitting for his first official portrait? A time traveler, perhaps?

How long did he live after this picture was taken? Did he marry? Did he have children? Did he pedal his Victorian time machine and head for distant lands? Could I have known him in a past life?

Obsessed, I sketched him in cartoon style. 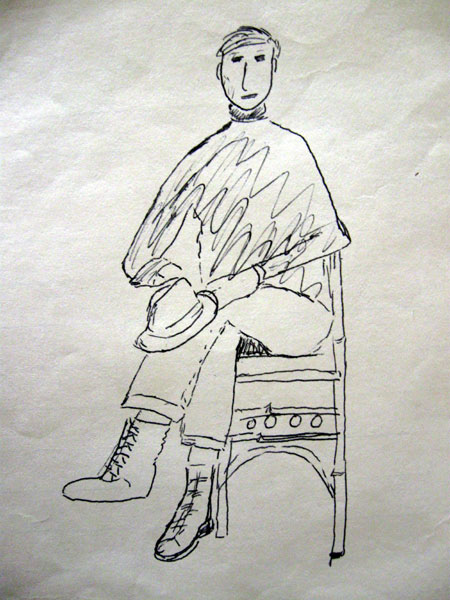 I did a more realistic sketch of just his face, trying to capture the detail. 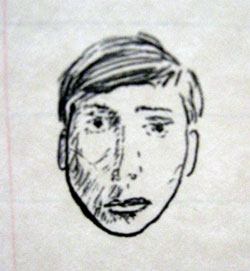 I even wrote him a poem, in the cryptic, grand style of adolescence.

His dead eyes held mine
with desperate isolation
and his slightly vented lips
spoke silently of longing,
his face a partly-shadow glow
rising above sable sweater

Behind him a charcoal wall
and a blurred garden window,
a bulge softened by a drape
and a substantial shadow;
all texture in
an already fascination

The formal hat held
with long, white fingers
rested rakishly on his leg
and one wrinkled boot
lifted from the floor,
brightened in afterglow

From my olden self,
which lies mysterious and
deep under all history,
loneliness aerated
like an ancient book reopened,
and fervency glittered
with the blinding aura
that infiltrates children's dreams

Many hours ago
white hands touched me,
soft lips brushed my hair,
the scent of faded summer
floated around me,
and I was lost forever
in two desperate mirrors of life

Why did I find this photo so compelling? I think Lesy says it best in his introduction:

This book is an exercise in historical actuality, but it has only as much to do with history as the heat and spectrum of the light that makes it visible, or the retina and optical nerve of your eye. It is as much as exercise of history as it is an experiment in alchemy. Its primary intention is to make you experience the pages now before you as a flexible mirror that if turned one way can reflect the odor of the air that surrounded me as I wrote this; if turned another, can project your anticipations of next Monday; if turned again, can transmit the sound of breathing in the deep winter air of a room of eighty years ago, and if turned once again, this time backward on itself, can fuse all three images, and so you can focus who I once was, what you might yet be, and what may have happened, all upon a single point of your imagination, and transform them like light focused by a lens on paper, from a lower form of energy to a higher.

I seldom pull out the book anymore, but whenever I do, I turn to his face. Before, in his photo, he was slightly older than me; now, much younger. His ageless, slightly androgynous beauty is as unmarred by time as when Charles Van Schaick released light on a glass slide a hundred years ago. And I am still fascinated.
My partner is

kabandra. Her entry can be found here.

Moral:
Photographs are the next best thing to a time machine.