This is my home-game entry for The Real LJ Idol. I am not competing this season but invite you to read the many fine submissions here and home-game entries here. Topic number 14 is another intersection week, this time with two available topics. This means we're supposed to work with another contestant, each choosing a different topic, with the entries linking as much or as little as you like. I paired up with another home-game player. I wrote about the topic "The Place That Can Not Be" while she wrote about "Precognition." 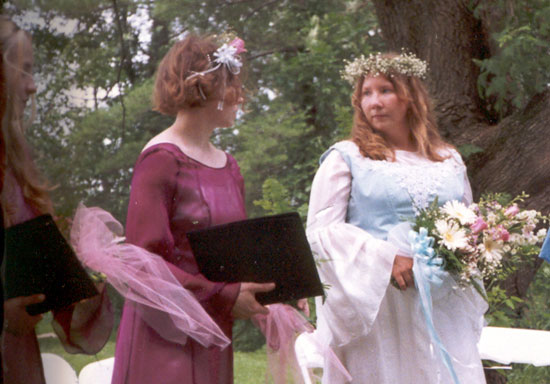 Me with my bridesmaids on the day of my first wedding, to The Seeker.
I call my first husband The Seeker, because as long as I knew him, he was searching for something he could not find. If you'd asked him, he would not have been able to articulate it: whether it was a place, a religion, or a person. For a while, we both thought it was me.

When I met him, he'd wandered onto my territory, the Hippie House where I lived. Perhaps I should have seen that it would be a temporary arrangement, but I had no such premonitions, no clairvoyant dreams. All I knew was that he was a sweet soul with luxurious long, dark hair, and that he loved me.

Within months of us meeting, he asked me to marry him, and we set a wedding date for what would be our first anniversary. My parents handled most of the details, which was fine because it was difficult to get The Seeker to sign off on anything. Plagued by more than indecision, he suffered from a mental illness that forced him to enact ritual patterns to clear bad thoughts from his head. For him, every decision was potentially earth-shattering. Choosing a video in a store was an excruciating experience: each video had to be quietly contemplated, and even then, he would often put back his choices.

I don't know why I thought marriage would be different. For a while, I lived by his wandering ways. We took off on a rambling honeymoon, starting in Missouri and working our way up the Mississippi. For a while, he seemed happy, roaming from town to town, seeing new sights, meeting people we would never see again.

But after the bear in Canada stole most of our food, I determined it was time to find a place to be together. He was not initially convinced, having spent many years traveling with nothing but a backpack. Now, he was encumbered with a truck full of belongings and a wife.

We high-tailed it back to Pennsylvania, lived for a brief time in my old bedroom in Mom's house before finding an apartment and jobs at a pizza parlor. I knew this was temporary, since I expected better things of myself. But he paced our narrow hallways, shaking his hands and praying, like a caged tiger wearing a path in the cement.

Not long after eating stale cake on our first anniversary, I could feel him pulling away. A fateful trip to Salem, Massachusetts, sealed the deal, as he communed with spirits I could not see and no longer wanted to believe in. They told him our together days were numbered.

I suppose it didn't help that I'd suggested having a baby. The vision of another being clamped to his foot must have been too much for him.

And so, he wondered away. At first, just for a week. Then, with a face drenched in tears, he returned to tell me he was leaving. I would go my way and he would go his, and I would have to move on without him.

I mourned for myself, for our failed relationship, for the child who would never exist. I feared for him; winced upon hearing he'd cut off his hair and burnt it. But he would wonder safely to another life, while I was the one careening towards a slow-motion crash, eating myself up with guilt, bloating my body with food and alcohol, falling into poisonous loves, until at last, that version of myself exploded in a ball of fire.

Only then, renewed, I arose from the ashes. It took four years.
My partner is

sharya . Her entry can be found here.