The record-breaking snow that socked the Philadelphia area this week slightly altered our Valentine's Day plans, but it couldn't keep my husband, The Gryphon, and I from celebrating. We probably ended up spending a lot less than we might have otherwise, however. Which, in truth, is not entirely bad. 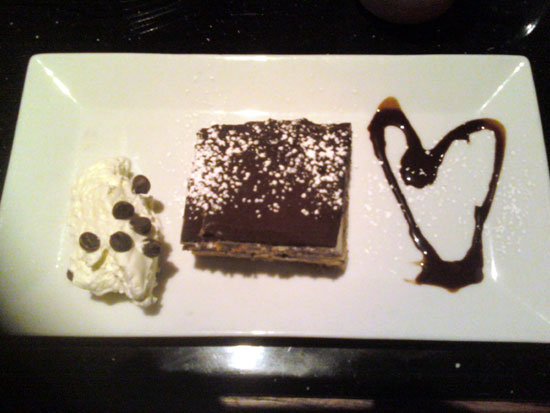 At the Italian Bistro in Center City Philadelphia, we got this fantastic tiramisu for dessert.

To begin with, thanks to the Errands from Hell, I didn't have time to hit a separate store and settled for buying a token of my affection in the grocery store, by way of a Hallmark card and a small box of chocolates with a plush teddy bear affixed to the lid.

For his part, The Gryphon ran into transportation difficulties, due to public transport delays. Combined with a late night at work the night he'd planned to go into the city to get me something, he ended up empty-handed on the weekend. But he was determined to get me at least a token, as well, so he walked several blocks on Saturday to get me a card and a small box of chocolates.

My other Valentine's Day surprise for him was supposed to be flowers delivered to his workplace on Friday. When I hadn't heard a thank you from him by 5 p.m., I checked the tracking and then called FedEx, who was delivering the FTD order. The flowers, it seems, were held over in New Jersey due to weather-related difficulties. The customer service rep assured me they'd arrive Monday. And true to their word, they did, looking reasonably fresh considering the delay. 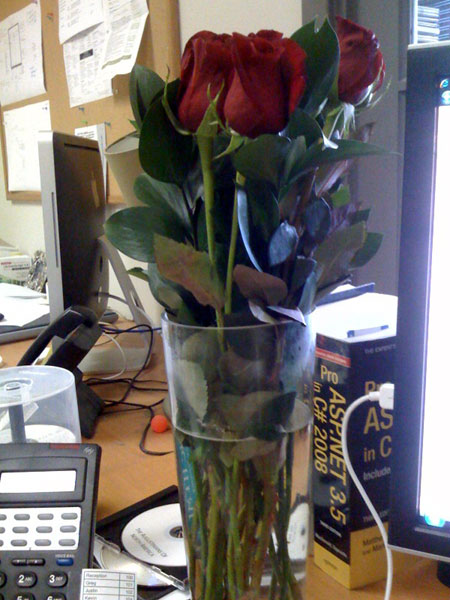 My roses to The Gryphon were delivered this morning
because of weather delays. They still looked good!

Because I had spent a bit more than him, The Gryphon offered to get me a gift while we were out for dinner on Sunday. He suggested a CD, since the restaurant is near both FYE and a bookstore. Immediately, I knew what I wanted: Adam Lambert's debut album, which I've been planning to buy. Happy Valentine's Day to me!

While the sidewalks were clear in Center City, the snow was piled high on the corners. For once, on this special holiday, I saw women and men alike dressed in practical, warm clothing, with a touch of red here and there. I only spied one pair of stiletto boots, which is somewhat amazing.

On previous Valentine's Days, we had made more of an excursion out of our celebration, catching a movie or enjoying another event. But this time, we contented ourselves with dinner at the Italian Bistro in Center City. They had a reasonably-priced Valentine's Day menu, which started with bruschetta, then soup or salad, your choice of several entrees, and tiramisu served with real whipped cream, the plate decorated by a heart in chocolate syrup.

For an affordable restaurant, it was a nice place, with a warm, welcoming atmosphere. The food, overall, was good.

Most of the weekend, we were homebodies. While the main streets were clear, many side streets were still questionable, and I didn't want to drive more than I had to. I guess it's that maternal instinct that kicks in during pregnancy, making you exercise caution.

We did watch a movie, although it wasn't exactly romantic: Zombieland, which I had rented earlier that week. I now understand why everyone has raved about it. Zombieland skillfully blends a comedy movie with a zombie flick, being funny and scary at the same time. I particularly liked the development of the characters. Most of the film was really about the relationships between the four main characters: how they found each other, how they battled with trust issues, and how they formed a dysfunctional family in a difficult time.

Woody Harrelson was great as a tough-talking zombie killer, while Jesse Eisenberg was endearing as the main character, a geeky everyman who really just wants to be loved.

Though we'd cut back our spending this year, Gryphon showed his love for me through actions, cooking almost all of our meals and helping me to get started on the long-awaited redesign of Wild Violet. He knows that the way to my heart is not just my stomach but also helping me achieve my goals.

Moral:
On Valentine's Day, it really is the thought that counts. Especially when there's snow.