This was another work & play weekend, the kind that makes me very happy, because I get to cross things off my list of things to do. 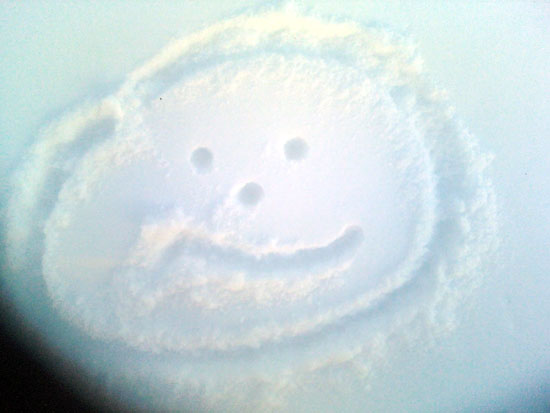 A smile someone drew in the accumulated snow.

Saturday morning at 10 a.m. my husband, The Gryphon, had a hair appointment in Center City Philadelphia, so I drove in with him. I tried to read James Van Der Meer's Booklife while he was getting his hair cut, but that was complicated by the fact that the stylist kept talking to me. She's nice -- don't get me wrong -- but it does cut into the reading time.

Afterwards, we had lunch at Di Bruno Brothers (makers of some of the best sandwiches in Philly) and picked up ingredients for The Gryphon to cook Sunday dinner. On the way home, we stopped at the hardware and grocery stores.

After a necessary nap, I spent most of the afternoon and evening working on a transcription assignment. This is why I typically don't take extra work on the weekends: it eats into my time for personal projects.

For dinner, we ate at the Llanerch Diner, because it was simple and inexpensive.

Finally, in the latter part of the evening, I got to spend some time sorting through Wild Violet submissions.

Sunday, we got to sleep in a little before a scheduled meeting with my College Roommate to look through some baby items she was giving away. We selected some clothes, some toys, and a few other items. The gesture was much appreciated.

Then, the three of us ate at a Mexican restaurant. I probably shouldn't have eaten the black bean burrito. According to sources I've read, if you're troubled with nausea and indigestion during the first trimester of pregnancy, it often is milder in the second trimester and returns in the third. While I've not had much of a problem with nausea, the indigestion has returned full force.

Once we returned home, we spent the rest of the day annoying the pets by looking at our blinky screens. I sorted through Wild Violet submissions, while The Gryphon played a game he'd recently downloaded. Meanwhile, we watched the Olympics.

I got through nearly the entire backlog of e-mailed Wild Violet submissions and put together a rundown for the next issue. I still have mailed submissions to peruse (though there are far fewer of those), as well as art submissions, but now I can focus on the redesign and the design of the next issue. I'll be working on graphics for the individual pieces, as well as graphics for the redesigned site.

It's a lot of work now, but since we'll be using WordPress, like I'm currently using for my personal site, it should be easier to update once the new format is established.

Moral:
Even the largest projects can be accomplished, one small step at a time.