This is my home-game entry for The Real LJ Idol. I am not competing this season but invite you to read the many fine submissions and the home-game entries. Topic number 16 is "Breaking the Fast." This week it was penned by a special guest, my cat, Luke. 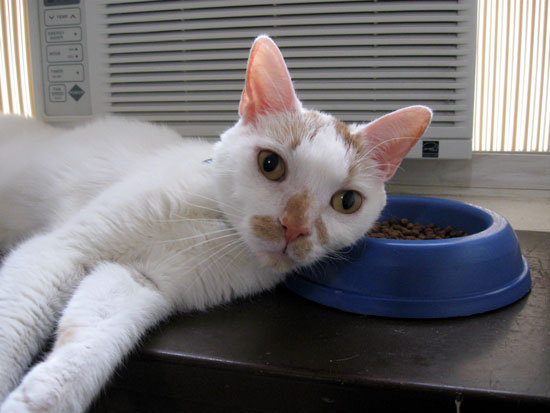 I lie next to my partially full food dish.
This is unacceptable.

I can't believe my human is finally letting me type something. For years, I've been trying to hint at my desire to express myself: by hopping up on her lap while she's typing and making plaintive mewing sounds. She misinterprets this as a request to be petted. Even when I tap at the keys, she doesn't get it. Humans are so dumb sometimes.

Take, for example, the food situation. Or I should say, the lack of it. When I first came home with my humans four and a half years ago, everything seemed promising. I loved the male right away, because he's gentle and seems open to suggestion. In the mornings, when I stand strategically on his full bladder, he always rolls out of bed and feeds me. The female seems a little slower on the uptake.

At first, she seemed to think I should only be fed twice a day, despite my standing next to my empty dish and mewing at the top of my lungs. Then, she began giving me small amounts before meals, which wasn't perfect but at least helped fill my growling tummy. One morning, she took me to the human female who wears a white coat, who ran her hands over my stomach and said I was getting, "a wobbly tummy." She told the female to break my food up into several meals so I always had something to eat. Finally!

That's why the female began feeding me four times a day: breakfast (well, actually, that's the male), lunch, dinner, and midnight snack (often quite long after midnight, to be honest). I get a measured scoop of the same dry food every meal. If I try to gulp up human food that she drops on the floor, she yells at me and says something about "allergies," whatever they are.

Now that I'm older, my stomach doesn't always growl as much, and I might not finish every meal. Still, it's important to keep your humans on a routine, so when mealtime comes around, I remind her it's time to feed me. Sometimes, when she goes to get the scoop, the male will say, "But he's already got food in his bowl."

She replies, "It's the ritual." I think I've finally gotten through to her.

No matter how much I try, though, I can't convince her that cats need to eat like hobbits, the short people in that movie my humans like. I've learned that hobbits eat at least seven meals known as breakfast, second breakfast, elevenses, luncheon, afternoon tea, dinner and supper. To me, that sounds about right. Why can't I get her to understand this?

Once, I thought I'd actually broken through the communication barrier. On a lazy Saturday, I woke the male, and he put a scoop of food in my dish before falling back asleep. Then, when they finally both got up later, I stood by my dish and made the plaintive look, mewing my request for more food.

The male looked confused: "But I already gave him breakfast."

"Yes, but now he wants second breakfast," the female said. I danced an impatient jig to indicate that she got it right. Instead, she just giggled.

Can you believe this cruelty?

Moral:
This is where I'm supposed to put a lesson learned from today's entry. FEED ME!