Since we were not able to visit Dad near his actual birthday (due to the Snowpocalypse), my husband, The Gryphon, and I drove to Central Pennsylvania this weekend for a little face time. 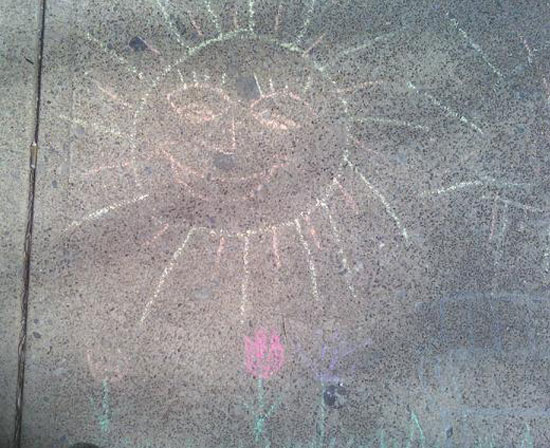 Some children drew this chalk drawing of a happy sun with flowers.

We actually got on the road fairly early, considering I still had some packing to do. This was made possible by the fact that my back was killing me by about 7:30 a.m. (thank you, pregnancy!), so I got up and took a hot bath.

Because of our early start, we arrived at about 1 p.m., shortly before Dad, an osteopath, arrived home from doing his rounds. The three of us walked to a local Original Italian Pizza and had lunch (I had a cheesesteak which was good but wasn't quite a cheesesteak, IMHO; the bread was wrong, and it didn't have enough cheese). We called Mom, then, to cement plans for the evening and secured reservations at one of Dad's favorite restaurants, housed in a converted train station.

In the meantime, Dad and I took a nice, long walk with my doggies, Una, and during which I photographed a few crocuses and some sidewalk drawings. Then I took a nap until it was time to get ready.

We met Mom at the restaurant, and most of us chose to order from the "smaller portion" menu, which should have been labeled, "normal portion" menu. It's somewhat ridiculous how much restaurants serve any more. Even with my pregnancy appetite, I routinely have to box up portions of my meals. This time I had the roasted chicken with broccoli and a baked potato, plus a little chocolate ice cream for dessert. That turned out to be the perfect amount.

Although we invited Mom to spend time with us at Dad's place afterwards, she wanted to make an early night of it and told me that she and I could get together the next day. So the three of us watched Festival Express, a long-delayed documentary following several rock, pop and blues acts as they traveled across Canada on a train, as part of a festival tour. The best part about it were the behind-the-scenes performances, with the musicians jamming with each other on the train. Where else could you see Janis Joplin singing with Jerry Garcia of the Grateful Dead and some of the guys from The Band? Great film.

My dad's cat, Mia, was not happy to have a canine interloper in the house and actually attacked Una on Sunday morning while Dad was in church! We had to separate the two of them. Una sat as close as possible to our feet for the rest of our visit.

I wanted to spend some time with Mom, so while she was at church I looked up maternity stores in the area. It's getting warmer now, and I didn't have any shorts or capris. Instead, I've been wearing two hippie skirts I picked up at a thrift store. Even though Mom doesn't like malls, she agreed to the shopping excursion when she learned it would only be one store. Fortunately, I'd called the store first to see if they had summer items, and the very friendly store clerk gave me the exact entrance and directions to the store. We found it right away.

Mom sat on a chair outside the dressing room and shared her opinions on the items as I was trying them on. Somewhat surprisingly, she did not like the idea of a loose-fitting peasant shirt, because it reminded her too much of the shapeless, tent-like maternity clothes she'd had to wear while pregnant with me in 1970. Instead, she pointed me towards some modern cotton-blend T-shirts with ruching on the sides. In fact, she liked them so much that she offered to buy me a couple, along with two tank tops, to go with the convertible pants (they go from full length to a cropped length) and the two pairs of capris I bought.

Afterwards, as we drove back home, she thanked me for asking her along, telling me it was as much fun as wedding dress shopping had been. She had loved the fact that I invited her down to help me pick a wedding dress about 3 years ago. I guess, being long distance from all three of her children, she doesn't get invited to participate in major life changes as much as she'd like. I'll have to remember that in the future!

She came in to Dad's place just long enough to help me show off my purchases and then gave me a huge good-bye. After a nap, The Gryphon and I got on the road for home, which was fairly smooth sailing (except for a really bad line cook at a rest-area sub shop who cost us about 30 minutes of travel time as he tried to balance orders). The rest of the way home, I told The Gryphon stories about having worked in food service as a Penn State student, and we compared our college's dining plans. Una slept in the back seat.

When we arrived home, our kitty, Luke, greeted Una with a trilling purr and some affectionate head rubs. Just what Una needed.