By now, I'm used to the baby kicking. He has sleep and wake cycles very similar to our cat, with a couple of hours of rest followed by periods of intense activity. They'll probably be great friends, with our son chasing our kitty, Luke, through the house during the period we call Luke's "morning freak-out."

When I say intense, by the way, I mean it. Last night, I looked down and could see movement. I showed my husband, The Gryphon, and his eyes grew wide.

"Don't worry," I assured him. He's not about to burst out of my chest. At least, I don't think so. 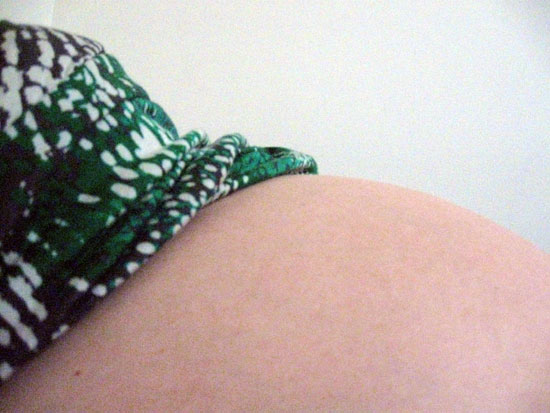 My baby's playground, where he kicks and turns.

At first, I thought that it might be related to the fact I'd just eaten some jalapeno and cheese pierogies, but he's doing it now, and all I had for breakfast was yogurt, orange juice, and a bagel with low-fat cream cheese.

It's sort of unnerving to watch your stomach bouncing and protruding from an internal source. "Now you get some idea what I'm experiencing," I told The Gryphon. He has felt the baby kick but likely has no idea how frequently he does so.

Of course, as soon as I posted a status update on Facebook about the new development, the speculation began. he'll be a dancer, one person suggested. A soccer player. A martial artist.

So here's your chance to get in on the fun.

ETA: Something weird is going on with the LJ "Create a Poll" option. I posted the code produced when I created the poll, but as you can see, it's not doing anything. So just leave your answer in the comments.

Moral:
Pregnancy is a weird and wonderful journey.