This is my home-game entry for The Real LJ Idol. I am not competing this season but invite you to read the many fine submissions. Topic number 20 is "Playing House." 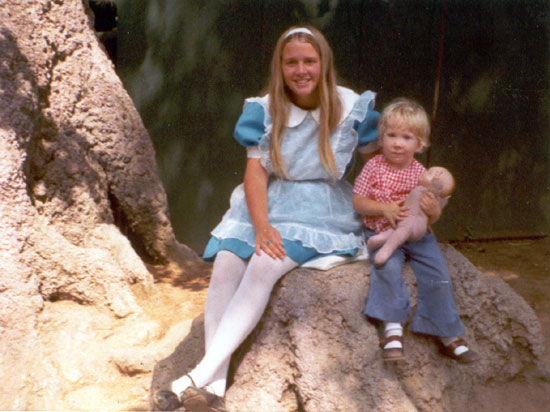 (Faster-loading version)
Me with Alice in Wonderland at a small theme park when I was about 4 or 5.
I'm holding the pink-cloth baby doll that was, at that time, my favorite toy.

They say that playing can be a way of trying out adult roles, but I was never much for playing with dolls, at least not the type of play that involves feeding and diapering and burping. When my friends, my little sister and I played Barbie dolls, they were always young, independent professionals, dating casually. Sometimes they had a steady boyfriend, but marriage never came up and children were never considered.

Likewise, when a friend and I played house, our play-acting consisted of a wife and husband going about their daily lives. Occasionally, when her cousin visited, she would play our needy, demanding child, but my younger sister, who should have been a natural for a such a role, resisted, insisting on playing a neighbor instead.

For a brief time, in my younger years, my favorite toy was a rubber-headed doll with a pink cloth body, which for some reason I was convinced was a boy, perhaps because of the lack of hair. While, in those days, I insisted on carrying him everywhere (including holding him in a photo with Alice in Wonderland at a small amusement park), he was littlemore to me than a human-faced teddy bear: a soft body to clutch, not a human being who needed care. Most of the time, I didn't even try to cradle him; I remember Mom correcting me: "You can't carry a baby with one arm!"

This lack of practice is probably why I was so bad at baby-holding when my little sister came home. I was 7 at the time and thought I was more than capable of holding my newborn sister. Mom hesitated, and then finally came up with a compromise: I could only hold her when I was sitting down, and Mom had to teach me how to do it right. She made it very clear that I was never allowed to pick her up by myself.

Wise advice, I now know, but at the time I huffed, "I'm a big girl!" Clearly, anyone could see that. I was capable of walking and talking and dressing myself, while this pink-faced cherub was dependent on us for everything. Nevertheless, I abided by Mom's rules, and I sat down on our orange velvet couch for her to place my little sister in my arms, showing me how to cradle her head.

About two seconds after Mom's hands left the baby's body, she began to howl. With her cries, she demanded that her real Mom take her back from this incompetent impostor. A short time later, Mom relented, easily hushing my sister. But while I wasn't allowed to help with much, I was fascinated by my little sister, and I brought my friends by the house to stare at her in her crib. "No touching," I told them, enforcing Mom's rules.

Every once in a while, on special occasions, Mom would again let me hold my sister: always seated, always briefly, and always her sweet little face would turn bright red from screaming. Yet, to this day, watching my mom care for my sister -- and my brother, as well as other friends, care for their children -- remains my best preparation for baby care, along with a four-week course from the hospital. I have very little hands-on practice.

Ironically, my sister has volunteered to help me with baby care at Otakon, the annual Japanese anime convention my husband, The Gryphon, and I help run. I haven't thought about it until now, but the little baby whose face turned red whenever I held her will soon be holding my month-old baby. I only hope she'll do a better job with him than I did with her. 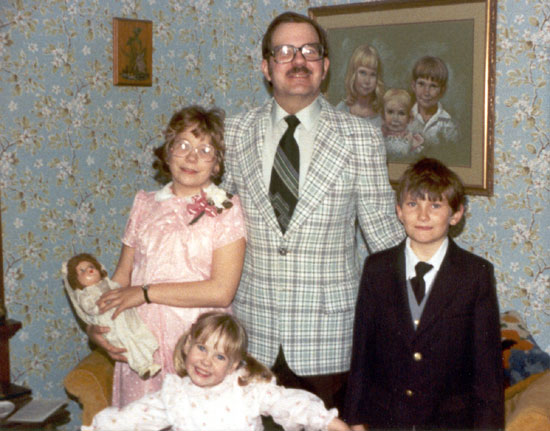 (Faster-loading version)
Me on my confirmation day, with Dad, my brother and my little sister.
Clearly, I had no idea how to hold the antique doll my mom passed onto me for the occasion.

Moral:
Practice makes perfect, and I'll be getting a lot of practice soon.