I've had good days and bad days recently, in terms of how I feel (thanks to the accumulating effects of pregnancy). Saturday was one of my best recent days, in part because of a baby shower thrown for me by my College Roommate and my sister. The event was held at my College Roommate's apartment and included a variety of friends, both new and old. 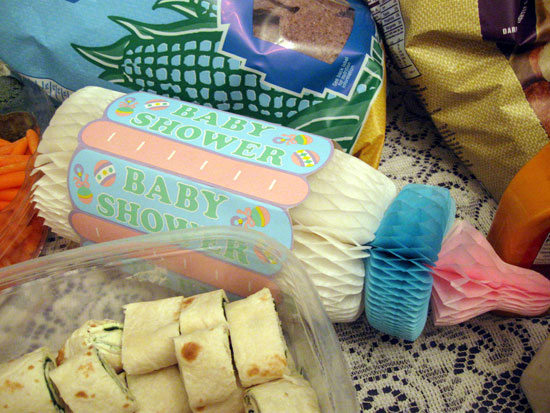 (Faster-loading version)
A cute little bottle made out of crepe paper and reading "Baby Shower" decorates the food table.

The best way to talk about the shower is probably just to share some of the best photos that my sister took, using my camera. Having been to a couple baby showers before, this was probably one of the best organized with the most activities.

Attending were my mom, The Paper; The Book Lover; The ER Doctor; The Cousin; My Cousin Carrot; My Improv Classmate; The Genealogist; The Paralegal; and Attila the Pun's wife, who brought Attila the Pun and their two kids. 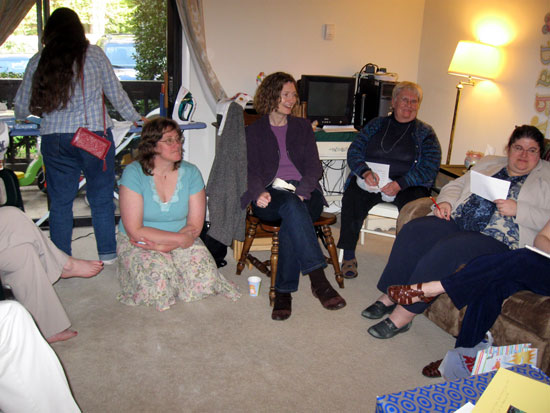 (Faster-loading version)
(from left) The Book Lover (facing away), The Cousin, Cousin Carrot, Mom, and The Paper 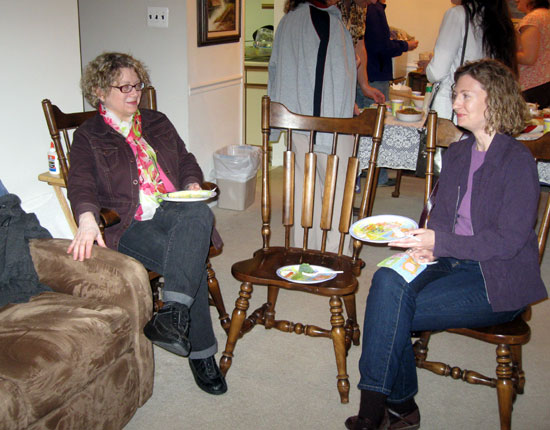 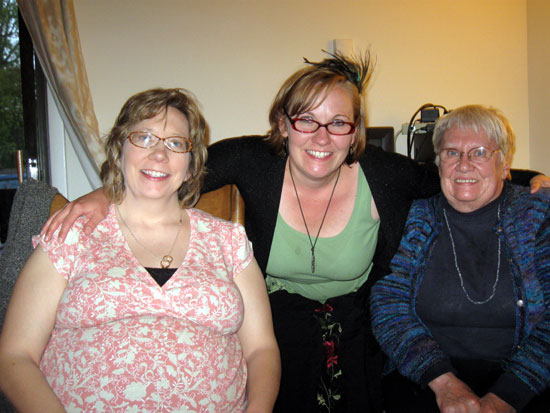 (Faster-loading version)
Me, my sister and my mom at the baby shower.

The baby shower was a potluck, featuring a great selection of healthy foods, including (pictured here), gourmet cheese with crackers, a veggie tray, a fruit salad, three types of chips with a variety of dips, a low-fat macaroni and cheese dish with veggies, vegetarian wraps, a lentil dish and a salad. On side tables were drinks, cupcakes, chocolates and cookies, and in the kitchen was couscous and a chicken dish. 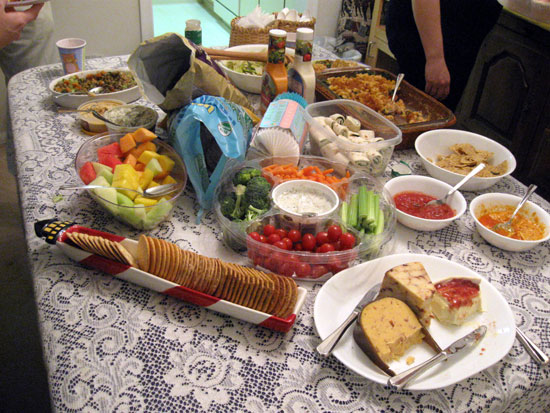 The ER Doctor made some amazing cupcakes, which she decorated to look like babies. She used a small cupcake as a base, with a miniature cupcake attached with a toothpick to be the head. Then she decorated them with colored icing and candy to look like they had diapers, bottles, and other decorative flourishes. 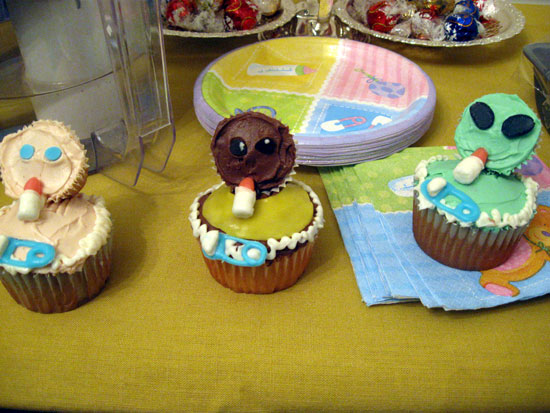 (Faster-loading version)
She also lots of fun with the cupcakes, such as the alien baby on the right. 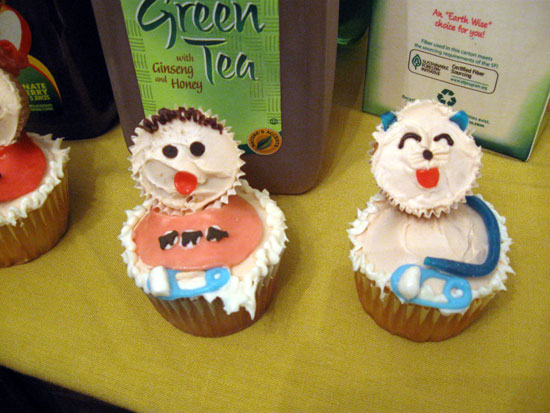 (Faster-loading version)
On the left is a babycake with hair and a cute T-shirt featuring animals.
At right is a babycake that looks like a cat or a bear. 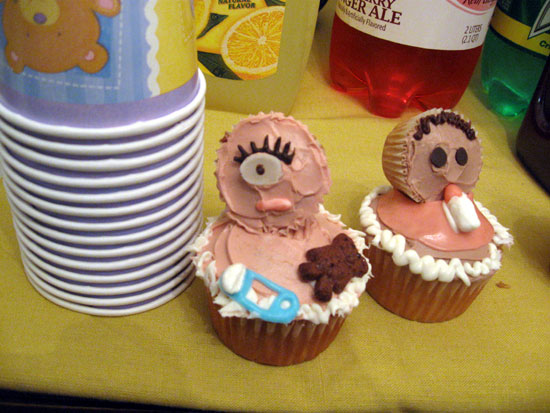 (Faster-loading version)
The one on the left is decorated like the one-eyed character
Turanga Leela from the animated show "Futurama." 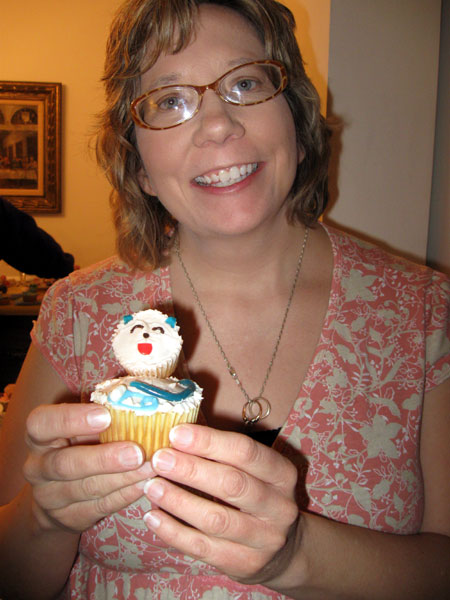 (Faster-loading version)
I chose to eat a cupcake decorated to look like a cat or bear,
because I couldn't make myself eat one that looked too much like a baby!

After everyone got some food, we got to play a couple games, starting with a game where we tried four flavors of baby food and tried to guess what they were. I got bananas, peas and pears correct, but I failed to guess squash, thinking it was carrots (it was very orange). 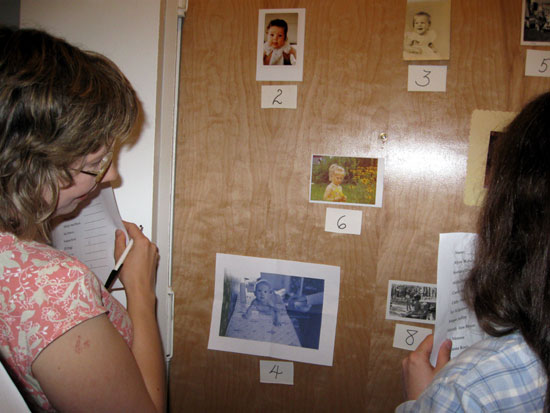 (Faster-loading version)
Guests brought baby pictures for people to guess who they were.
I'm in the black-and-white photo in the bottom left, my only real nude shot ever! 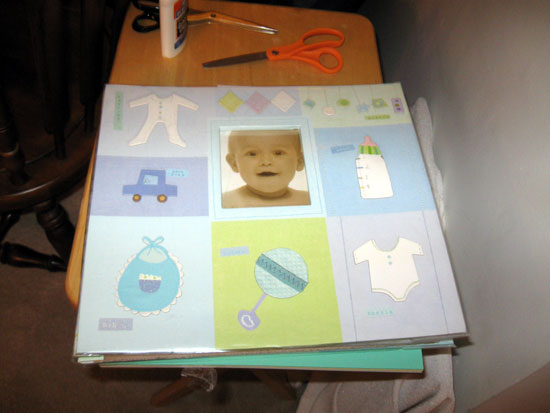 (Faster-loading version)
Guests could help put together a scrapbook containing their wisdom and advice about parenting. 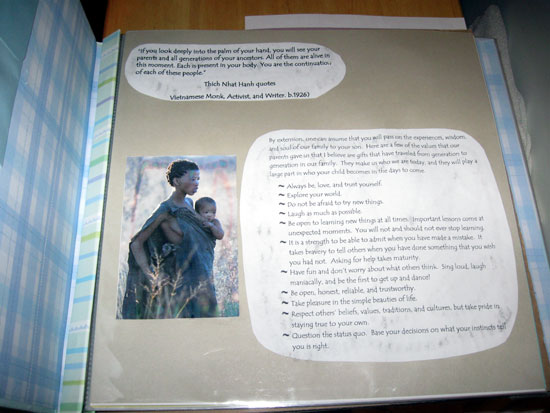 (Faster-loading version)
Inside the scrapbook, guests could glue photographs of parenting
next to their wisdom and advice. 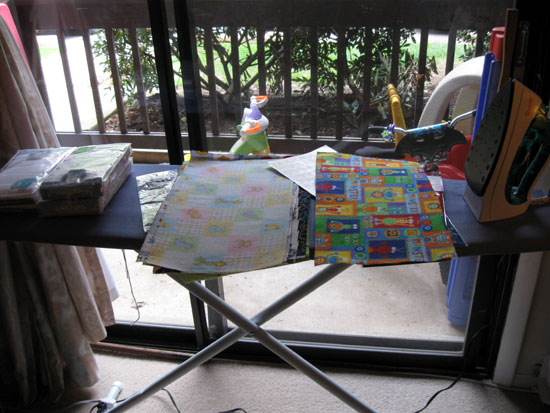 (Faster-loading version)
Guests were asked to use iron-on cloth and letters
to make customized onesies for our little guy.

I received a variety of wonderful, useful gifts, including pacifiers, books (one of which is signed by the author), bibs and booties, a bouncer, baby bottles, a hand-knit sweater/bootie/hat set, a hand-knit blanket, a personalized framed embroidered picture, a nursery monitor, a duck-themed bath set with a selection of duckie clothing, receiving blankets, various sizes of sleepers, onesies and shorts, some rubberized bibs, a boppy, checks and a gift card, and even some moisturizer to pamper myself. 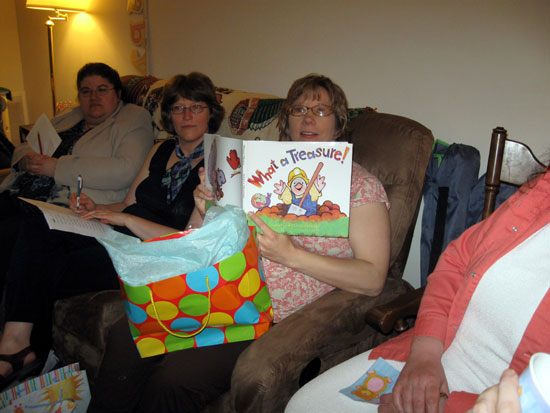 (Faster-loading version)
This book, "What a Treasure," a gift from The Cousin, was customized for my son
and signed by author Jane Hillenbrand. I can read it to him while he's young, and he can treasure it later.
From the left are The Paper, My College Roommate, and me. 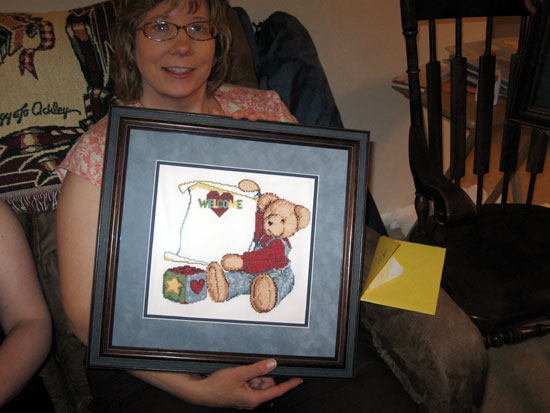 (Faster-loading version)
This embroidered bear will be completed by The Genealogist
with our son's name, birth date, and measurements. 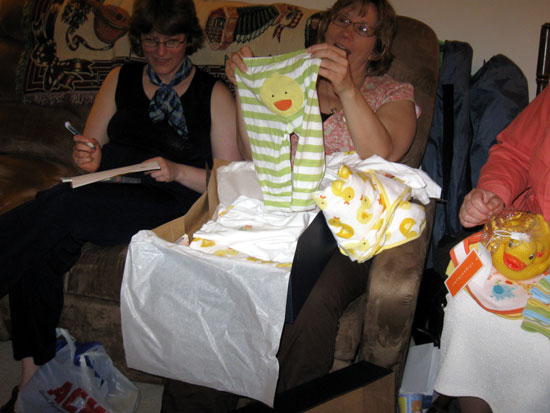 (Faster-loading version)
One of the many cute items of clothing I received.
I joked that these green-and-white striped pants with a duck on the butt would be
the only pants I would photograph him in, just because they're so silly.

I had a great time and was touched by all the personal expressions of support, whether through conversations, cards, or advice pasted in the scrapbook. Truly, I am lucky to be a part of such a circle of strong women.

Moral:
Love is all around, if you could but perceive.