While I'm still in the final stages (hopefully) of my cold, I was feeling well enough this weekend to begin the reorganization project to make room in our home for our baby.

Of course, some people seem to believe that the minute I got pregnant, I went out and purchased an entire infant bedroom suite and repainted a previously empty room, set aside as a nursery the minute that my husband, The Gryphon, and I married. At least, that's what I assume those people are thinking who have been asking me, "Are you ready for the baby?" for the past several months. Typically, these are the same people who ask me, "Are you ready for Christmas?" the day after Halloween. 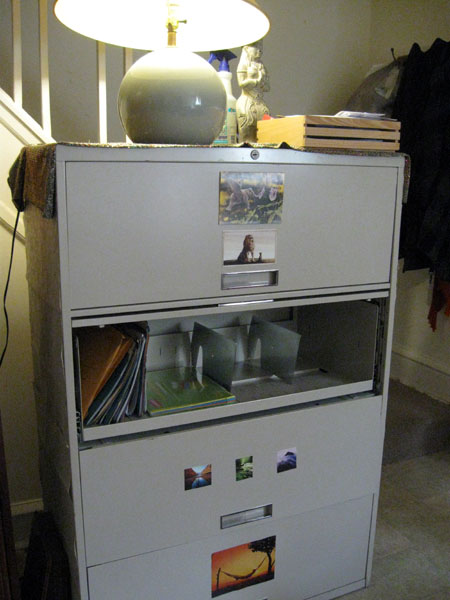 (Faster-loading version)
After my efforts, there is space in my filing cabinet
to move some files from upstairs.

In this, the real world, my husband and I live in a Philadelphia rowhouse, and preparing a space for the baby means converting the office/guest room into the office/nursery. Since I work at home and cannot give up my office space (and moving downstairs to a corner of the kitchen/living room would be both difficult and impractical), this is the current solution. We hope to save up enough for a bigger place (whether rented or owned) by the time we need it.

And now that I've had my baby shower, we actually have enough baby gear to make the reorganization project necessary. (Contrary to popular belief, we also did not go on a huge spending splurge after discovering I was pregnant but, instead, waited to see what family and friends might give us first.)

The reorganization project could be compared to those plastic puzzles with the moveable squares, which I believe are called scramble square puzzles. In order to unscramble the picture, you need to move a square into an empty spot, and then move another square into the vacated space. Repeat until you've solved the puzzle.

And so my reorganization project began by making space in the four-drawer, office-sized filing cabinet (designed poorly with drawers that for some reason are not removable), which my friend The Martial Artist says is Heavier Than the Sun. The cabinet resides just inside the doorway, next to the entertainment center, which was as far as anyone could agree to move it. This does happen to be a perfect spot for our cat, who slips through the banister from the stairs behind the cabinet and perches next to the lamp. (He is also, coincidentally, extremely skilled at perching on hips, as I discovered this morning when I awoke to him sitting there, having decided to take the highest spot on the bed, perhaps to show the dog who's boss.)

My goal was to clear enough files to make room for most of the files currently stored in a small, 3-drawer filing cabinet in my office, of which only two drawers work, thanks to an overzealous attempt in a previous apartment to open the bottom drawer while something heavy stood in front of it.

We will then get rid of the small filling cabinet and, if deemed necessary, replace it with a horizontal filing cabinet whose top could be used for diaper changing gear (our crib contains a removable changing shelf). The following step will be to go through the items I have stored under the bed and determine what to keep and where to put it, so that we can put the bed in storage and assemble the crib. Then it will be a matter of attacking any remaining piles of books and/or papers in my office, to either discard, donate, or find space for them. Once we know what space we're dealing with, we will find storage solutions for toys and bath accessories. His clothes will go in a small dresser in the master bedroom that is already nearly empty.

So despite frequent breaks necessitated by being sick on top of being in my third trimester, I managed to go through the entire cabinet over the weekend (excepting the bottom drawer, which houses my clippings from the newspaper job I held for several years). The results: two bags of trash, one bag to be shredded, and about two to three small boxes worth of folders to be moved into storage in our basement or garage. Those boxes will need to be checked before they're moved, however, due to Luke's newfound joy in nesting within them. Una was a lot less delighted, however, giving me plaintive looks every time she was forced to weave around piles and boxes during the file pogrom.

For my efforts, the universe decided to present me with a reward. In one folder, I found a sheet containing my measurements in 2001, the last time I weighed what I (gasp!) do now. To my surprise and delight, all of my current measurements remain considerably below what they were then, by anywhere from two to five inches, depending on the body part. However, I should note that I've been measuring my waist at approximately the same point I had been. Perhaps if I'd been measuring my belly at its widest point, there would be more correlation for that area alone.

I know, of course, that pregnancy weight is different from regular weight, and the different distribution of said weight also leads to the various types of discomfort suffered at this stage in pregnancy. It was very nice, however, to see tangible proof of the difference.

In all areas, it seems, I'm making progress.

Moral:
Cats adapt to change quite easily, as long as there are boxes involved.