In what would probably be our last social opportunity before I give birth (my due date is early June), The Gryphon and I attended an Otakon social Saturday for staffers in Eastern Pennsylvania.

Sunday was reserved for the Scramble Square Puzzle Project, a.k.a. reorganizing to make room for the baby. Plus, we went out for my first ever Mother's Day dinner! 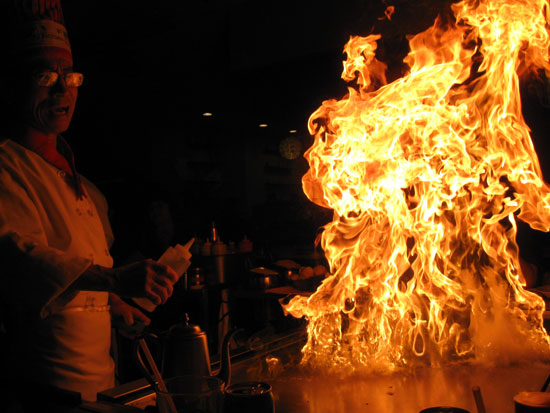 (Faster-loading version)
Our chef at the hibachi restaurant started out
with an impressive fire, which he used to clean the grill.

For the Otakon social, we met at a hibachi restaurant and then gathered at the home of The Cousin and her husband, The Photographer, for an evening of socializing and board games.

The Gryphon and I misjudged how long it would take to get to the restaurant, and our Garmin GPS advised us we'd arrive half an hour late. We called The Cousin to let her know. As it turned out, the rest of the group was still looking at menus when we arrived.

Attending, besides The Cousin, The Photographer and their eldest daughter with a friend; and of course, The Gryphon and myself, were The Cheshire Cat and his wife, The Paper; The White Rabbit; The Dormouse; The March Hare; The News Producer; and three other staffers whom I didn't know as well.

We were seated at two adjacent tables, and the hibachi chefs (who were uncle and nephew) interacted a little as they both cooked and entertained us with grilling tricks. My favorite was when our chef tossed a bowl on top of his chef's hat and then caught two eggs in it!

Although my conversation with The News Producer initially revolved around Otakon Press Relations, I eventually reminded myself to talk about something other than business.

This was easier at the Cousin's home, which she has dubbed the Fabulous Beige House. A split-level ranch in a beautiful rural community, it had ample room for socializing. I played two games over the course of the evening. The first was Ticket to Ride, a board game where players compete to build the longest rail lines. I competed against The White Rabbit, The Cheshire Cat, and one of the staffers whom I'm just getting to know. He has helped out with Panels in the past and will be working with a different department this year (although I forget which one).

This game was fun, even though I finished last, having had to find creative ways to complete my longest route and therefore, unlike everyone else, not getting a chance to choose extra routes to complete. 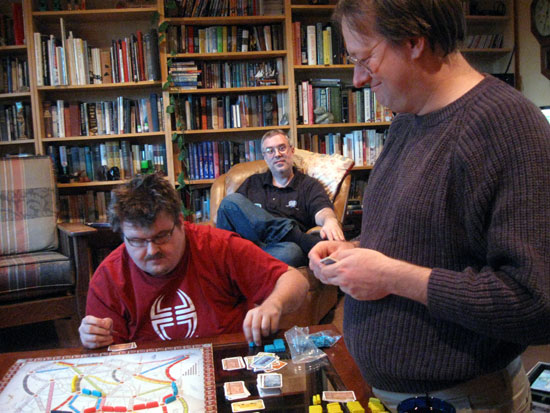 (Faster-loading version)
The White Rabbit takes a look at the board while playing
Ticket to Ride. The Gryphon watches in the background.

After the game ended, I got some delicious hummus and cheese from the array of snacks in the kitchen and socialized a bit before committing to playing a second game. 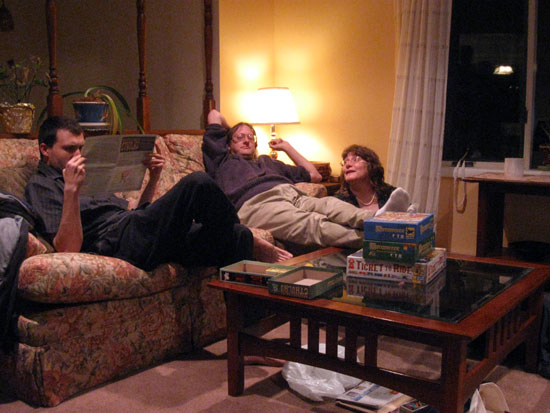 (Faster-loading version)
While one staffer looks at a magazine, The White Rabbit
and The Cousin engage in conversation.

The second game I played was Munchkin Cthulhu, a variation on the popular card game Munchkin. In it, players defeat monsters and acquire special powers and equipment as they strive to be the first to reach level 10. 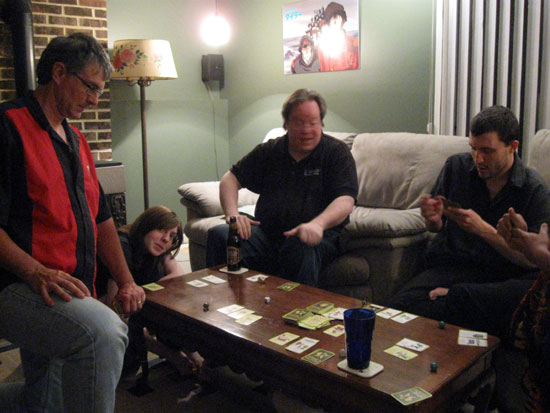 (Faster-loading version
(from left) The Photographer, his youngest daughter, The Dormouse
and another Otakon staffer play Munchkin Cthulu. 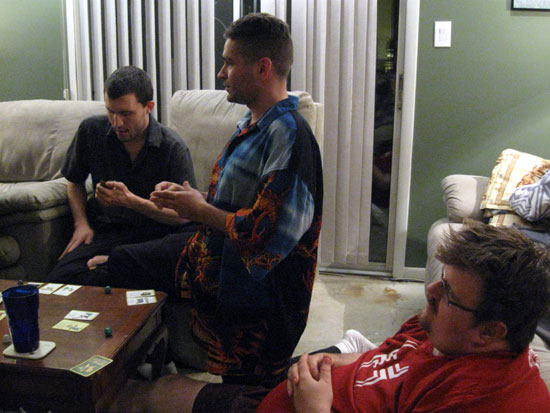 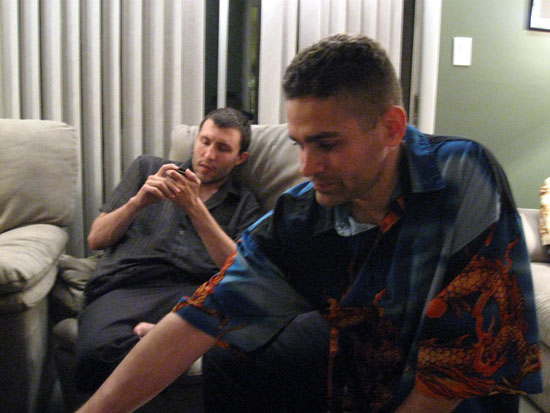 (Faster-loading version)
While one staffer makes his move during Munchkin Cthulhu,
another gets some texting in.

Munchkin Cthulhu can be very cutthroat, if people choose to play that way, but you can also make deals with other players to, for example, help defeat a monster in exchange for a reward. We were apparently doing this more than The Dormouse would have, and he exclaimed in exasperation at one point, "This is not a cooperative game!"

Some of us saw things differently, namely the cultists, who gained power the more players joined their ranks. I was the initial cultist and instigator, and by the end of the game, five of the seven people playing had joined our ranks. When it came time for my final battle for the win, The Cousin's youngest daughter helped me for free! After all, we reasoned, if one cultist wins, we all win. We all went around giving each other high fives, ignoring The Dormouse's insistence that we should, instead, be sacrificing each other to the Old Ones.

When The Cousin found out how the game had ended, she hugged her youngest daughter and said she was proud of her. That's exactly the sort of mother I want to be.

Sunday I focused on the Scramble Square Puzzle Project. Earlier in the week, I had cleared out the drawers in my small filing cabinet located in my office. On Sunday, I went through the box of materials that had yet to be refiled, either in the large filing cabinet downstairs, in storage boxes, or elsewhere in the office/guest room, which we are converting into the office/nursery.

When I'd completed that task, I cleared out all the items under the guest bed, which will be moved to storage in order to make room for the crib. This was easier, since a lot of what was in the under-bed storage bags was clothing, which went into a vacuum-sealed storage bag in the basement.

We had a little trouble finding a restaurant to celebrate Mother's Day. The first place, which had a ton of reservations, offered to seat us at an outside patio they claimed was heated. I declined, not wanting to get sick again, since it was an unseasonably cold day. At our second choice, Casey's, the hostess quoted a 20-minute wait but was able to seat us almost immediately. I even managed to find an Italian dish that fit my craving: the Chicken and Penne special.

In the future, we'll know to make reservations if we plan to eat out on Mother's Day!