After this weekend, I finally have an answer for the people who have been asking me, "Are you ready for the baby?" I can say, "Nearly." Thanks to the help of our friends My College Roommate, The Martial Artist, and Kapow, we moved the big items in order to convert the office/guest room into the office/nursery. 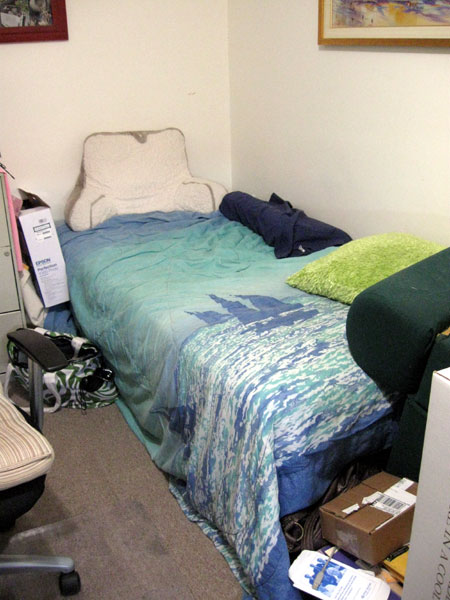 As you can see in this before picture,
the guest room (in between guests) had gotten quite cluttered.
Sometimes, there were books and papers on the bed, as well. 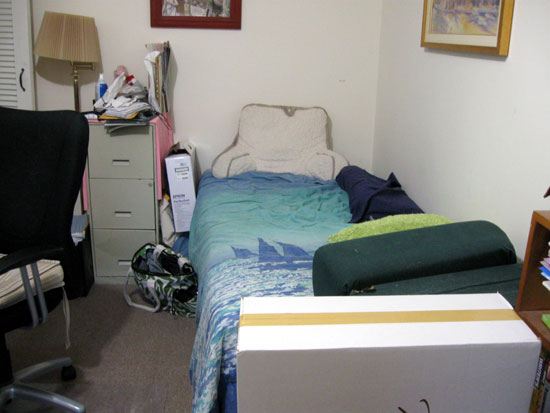 (Faster-loading version)
The large white box visible in this shot was my wedding dress.
The small filing cabinet only had two functional drawers.

As you may or may not remember from part one and part two of this project, my husband, The Gryphon, and I live in a modestly-sized rowhouse in a Philadelphia suburb. Space is therefore at a premium, and before we could move in the baby furniture, I had to do a lot of reorganization.

I also cleared out a small dresser in the bedroom, which had been used to store some of my seldom-worn clothing, like stockings. Since that dresser had a broken drawer, which we could not figure out how to fix, we removed it and replaced it with one of similar dimensions. That dresser, though it will stay in the master bedroom, will be used for baby clothes.

Because Una gets a little anxious when things are moved, I sat with her and the cat in the master bedroom with the door closed while things were being moved in and out of the house. Luke cringed in a corner while Una barked every time she heard the front door open. Meanwhile, I used the laptop and caught up on a little e-mail and LJ.

The guest bed, my wedding dress, and a couple boxes of files were moved to the garage for storage, while the crib, a new set of plastic rolling shelves, and the new dresser were brought inside. Then I was free to come out of the bedroom and release the pets. Una immediately greeted everyone and tried to "help" them with the crib assembly by sniffing all the pieces spread around the floor, perhaps trying to decide where each should go. I told her to lie down on her dog bed, and she complied for brief periods at a time before trying to "help" some more.

By the time we had finished, we had the rudiments of a nursery, complete with an assembled crib. 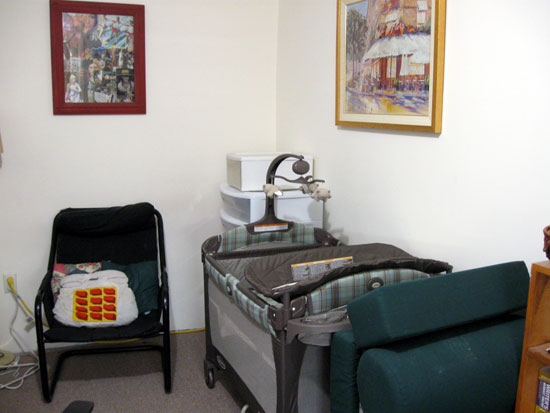 (Faster-loading version)
The nursery corner of the office, in its current state.
The green item is a fouton which, along with an inflatable mattress and the couch,
now represent our only accommodations for guests.

In the bedroom, we also had a new dresser, but since it looks almost identical to the old one, I didn't bother to take before and after pics. I am happy to report that both the dresser (which, incidentally, I'd initially Dumpster dived) and the filing cabinet were claimed before the trash collectors came this morning. Hopefully, whoever took them home has a better idea about how to repair damaged furniture than The Gryphon and I.

We offered to provide free pizza for everyone, but it was only mid-afternoon when we finished. After giving them their pick of the items we're going to be either giving away or selling, first The Martial Artist and then My College Roommate headed home.

Kapow stayed longer, to help The Gryphon assemble the new dresser. We ordered some Chinese food for dinner and ended up talking about -- what else? -- Otakon business, since we're all staffers. Then he hopped on his motorcycle and headed home, as well.

The next stage in the process will be to bring all the baby items inside from our enclosed porch (where they currently reside) and find a place for them. I will also continue the reorganization of the office side of the office/nursery, which might clear up additional space for baby items. At least, though, we now have a place to put our little one, when he comes home with us.

Moral:
If you don't have a lot of space, make the most of the space you have.