This is my home-game entry for Week 28 of

therealljidol. I am not competing this season but invite you to read the many fine submissions and the home-game entries. This week's topic is "Salt of the Earth." 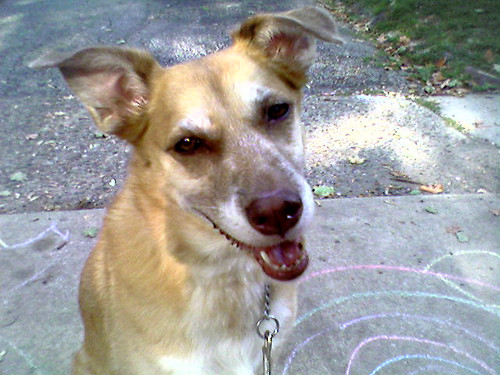 Una smiles during a walk

Yesterday, when I sat down heavily on the couch, with a deep sigh, my doggie, Una, slid next to me. She regarded me with large, brown, sympathetic eyes, nuzzled into my neck, and "kissed" me gently, licking me. I threw my arms around her, smiling. I've grown used to such natural expressions of love and support from Una. The best part is, she asks for nothing in return but a little food, lots of fresh water (she loves fresh water), and a little attention.

Growing up, I was a cat person, but since I've known Una I've learned the joys of having a dog friend. They certainly deserve their reputation as loyal, noble companions. Una is my defender, my protector, my playmate and my confidant.

Her better nature has never been more apparent than during my pregnancy. On the days when I have felt worse, she has served as my trustworthy Nurse Dog, seeking to bring me comfort with her presence. On my better days, she has followed me around the house as I whipped it into shape for the baby, or watched with interest as I tried all my clothes to figure out which ones I had to pack away.

When we walk together, she matches my pace. Now that I hobble slowly, instead of walking briskly, she takes extra breaks to sniff flowers or grass or trees. She waits patiently while I pause to stretch out my aching back. Through it all, she smiles brightly, reminding me to be grateful for a sunny day and a light breeze.

Whenever I nap, which is much more frequently than earlier in the pregnancy, she curls up at my feet on the couch. She raises her head each time I toss and turn, just to be sure I'm still OK. I could not be better attended by her if I were one of her own puppies.

Lately, she's taken an interest in the baby things, sniffing every new item to try to figure out what it is. When my husband, The Gryphon, and I practiced diapering on a doll, Una watched with a broad grin. Following an article we read about getting pets ready for a baby, we spent some time a week ago carrying the doll around and giving it attention. Una's tail wagged at the pantomime, but she was not fooled. A simple sniff test told her that this was no actual baby but rather a plastic replica. Silly humans!

I'm almost certain that she knows something is up. Dogs, after all, have been shown to be able to smell physiological changes. I know I must smell different, but I don't know how much she understands. Can she tell I'm carrying another life inside of me? And if so, does she assume I'll be bringing home six to eight puppy-children?

No matter how much she truly understands, Una is a dear friend, a valued companion, and a shining example of selflessness. Knowing her brings light into my life and a smile onto my face.

Moral:
Dogs are the salt of the earth.