This is my home-game entry for Week 31, Part B of

therealljidol. I invite you to read the many fine submissions and the other home-game entries. For Part B of week 31, we were asked to write about the topic we did not address before from Week 14: "The Place That Cannot Be" or "Precognition." This meant I was writing about "Precognition." 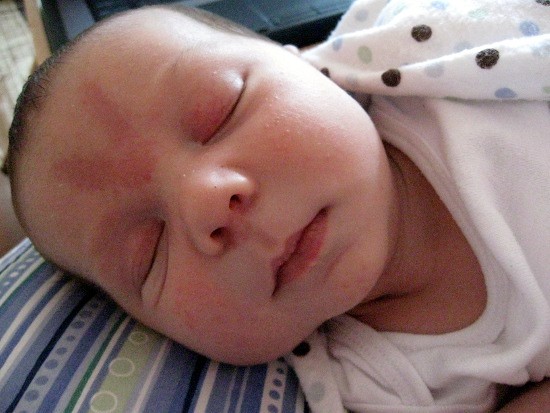 (Faster-loading version)
Kung Fu Panda sleeps on my lap. What is he dreaming?

Our kitty, Luke, has accepted his role of flitting around the edges, occasionally accepting pats from a free hand (which is one of many reasons we keep hand sanitizer nearby). Our doggie, Una, is our constant protector, positioning herself between us and the doorway, periodically giving our Kung Fu Panda a big grin, longing for the day she will be allowed to lick his face (We tell her that won't be allowed until he has the ability to turn his face away from her advances).

My husband, The Gryphon, and I are on our way to perfecting the calming techniques in Dr. Harvey Karp's book, The Happiest Baby on the Block, techniques that work so well they've led to an important revelation: Kung Fu Panda is a night owl. Or, in the terminology of Heidi Murkoff, Arlene Eisenberg and Sandee Hathaway's What to Expect the First Year, he's got his days and nights mixed up. Not really a surprise: he was always particularly active after 11 p.m. while floating in the prenatal water tank of my uterus. Now that we're better at calming him in the evenings, he stares placidly at us with those clear eyes I'm still convinced are blue, as if to say, "What next?"

While he will happily suck on a pacifier, which he is now learning to keep in his mouth, you can only leave him in his crib for a relatively short period in such a state before he once more cries out to be held. The solution, according to What to Expect, is to do just what we're doing: wake him for feedings every two hours during the day and wait for his body to adjust.

In daytime, however, he slumbers peacefully, whether held in our arms or lying in his crib. At such times, he often makes mysterious facial expressions: it is the only time, for example, we've seen him smile what appears to be a genuine smile, rather than the grimace of concentration associated with "diaper business." (He is a regular tycoon in the diaper business now, producing like clockwork. Soon he'll need to hire new workers.) His sleep smile, The Gryphon has noted, often seems to follow pantomime sucking/nursing movements.

Scientists say that dreams help us process information, which I believe may be one reason infants sleep so much. While it might seem second nature to us, learning how to keep a binky in your mouth or how to poop properly might require serious processing time.

But what do infants dream? Are his dreams primarily tactile -- the feel of enveloping arms, the mouth motions required to suckle? Are they clear in the foreground, blurry in the background, like his developing visual field? Or is he already experiencing the sorts of surreal, multicolored journeys depicted in The Imaginarium of Dr. Parnassus, the first movie we've managed to watch all the way through since bringing Kung Fu Panda home?

Kung Fu Panda dreamt through part of the movie on my lap. As I watched the fantastic images dancing across our screen (Terry Gilliam's best movie yet; rent it immediately), I wondered if Kung Fu Panda's dreams are also oddly transformed. Perhaps an otherworldly adventure with the large golden dog he noticed during his first week here, or perhaps floating in a suffused cloud while communing with the baby in the mirror.

Perhaps his dreams are even grander. Perhaps now, his infant inner eye graces him with future glimpses: a summer day in the park with his family; playing with Una, his loyal companion and protector; school's bright confusion; a giddy first kiss; an academic triumph; catching a ball; or simply walking on his own feet. Could he be previewing his future: one day recognized only by the tingling sensation of deja vu?

There is no way to know, and no way to ask him. By the time he's old enough to tell me, he will not remember. His dreams, whether precognitive or not, will remain as mysterious to us as the great, bright, airy world is currently to him. Somehow, we will find our way toward each other. Somehow we will learn to speak the same language, and when we do, I will ask him each morning, "What did you dream?"

Moral:
Newborns require serious sleep, so much so that they borrow some from their parents.