On Sunday, the Fourth of July, my sister and her husband left shortly after breakfast (a Dutch baby, made for us by my husband, The Gryphon).

In the afternoon, we made our first real social visit since I gave birth to Kung Fu Panda three weeks ago. We attended The White Rabbit's Fourth of July barbecue, and I was pleased to see a lot of friends, some of whom I had not seen in months.

Attending, in addition to our host, were The Dormouse; The Cheshire Cat and his wife, The Paper; The March Hare; Batman; Batman's Roommate; My College Roommate and her son; The Martial Artist and The Book Lover and their son; The Warrior Princess; The Devil's Advocate; The Cousin and her husband, The Photographer; The Court Wizard; The Big Kahuna; The Fruit Lady, her husband, The Quiet Man, and their daughter; The Voice; The AMV Editor; and a few others I didn't know who showed up before we left.

I was surprised so many people were there, since the last couple of parties at his place have been much smaller. Everyone greeted us and took a look at Kung Fu Panda, who slept most of the afternoon, probably making up for being alert for so long the day before. Also, even with the air conditioning running, it was pretty warm in there with so many people.

Among the highlights of the party were socializing with the Martial Artist and the Book Lover, as well as with The Fruit Lady and The Cousin, all of whom were happy to compare parenting notes with me. I was delighted to discover, for example, that Kung Fu Panda's current habit of vocalizing by saying "Eh, eh" to express a variety of emotions is a stage that their children went through, as well. And spending time with their well-behaved, intelligent children (except for The Cousin, whose daughters are traveling) was also inspirational. Some day, Kung Fu Panda will be running around, playing with Legos and/or talking about his experiences in school.

Because I know she loves babies, I had correctly predicted that The Cousin would ask to hold Kung Fu Panda. Since he was so zonked out, he actually slept on her for a long time until she finally handed him back. In the meantime, it was nice to be able to have two hands free to eat, a luxury I rarely enjoy any more (even if he's sleeping, food smell rouses KFP, and he'll cry to be held). 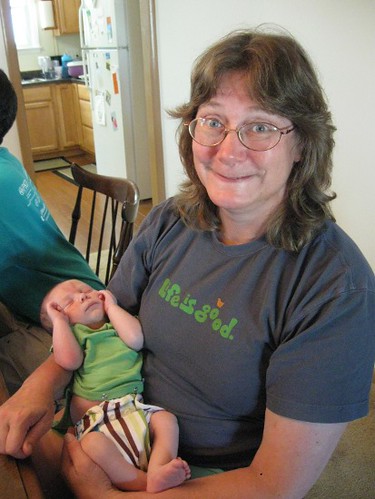 The Cousin holds Kung Fu Panda. I told her that this delighted expression
is her 'baby face,' because it's the face she wears whenever she holds a baby. 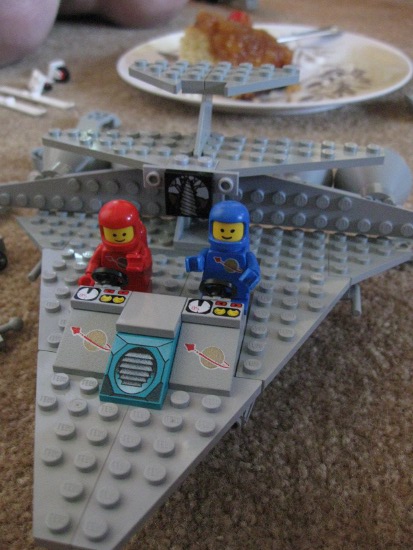 The White Rabbit had Legos out, which entertained the toddlers,
as well as the adults. 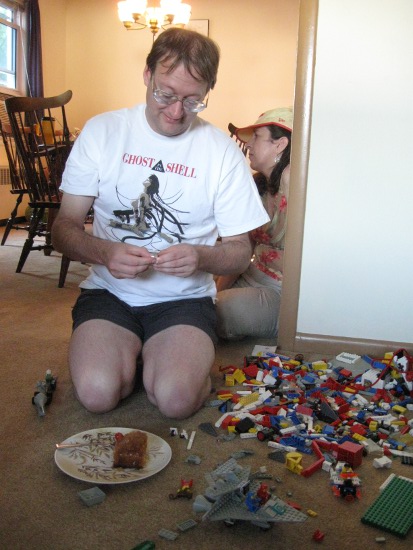 The White Rabbit gets creative with the Legos. 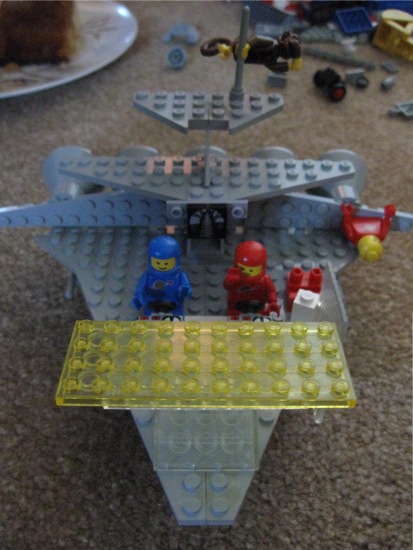 The "new and improved" Lego ship, courtesy of myself, The Court Wizard and The Fruit Lady,
complete with a big dash board, a glass door, a monkey on a pole, and a dismembered crew member. 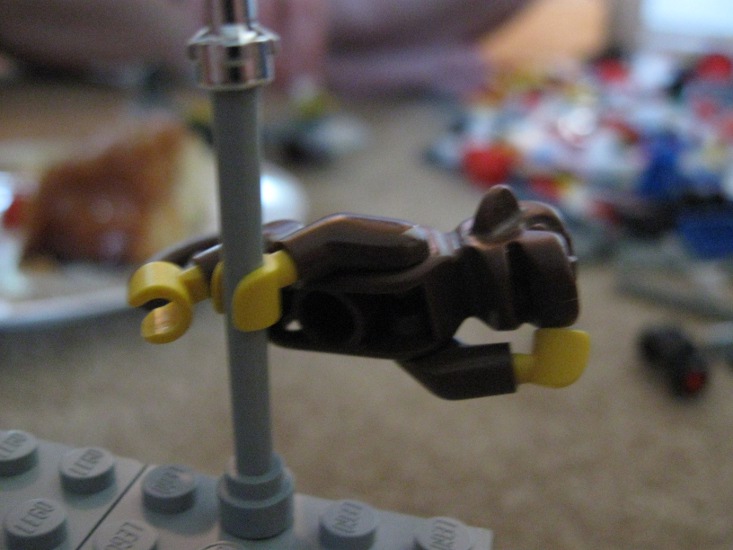 Every decent space ship needs a monkey on a pole.
Especially a three-legged monkey.

When I needed to feed Kung Fu Panda, I took him into the basement rec room, which was much cooler and also empty of guests. I had planned to feed him on the porch, since I had brought a privacy blanket and wouldn't have minded talking to one or two people. But it was really too warm for that, so the basement was a better choice. The Gryphon brought me wacky book to read, about a Japanese trend of impractical inventions.

Later in the afternoon, I stepped outside and saw The March Hare, The Big Kahuna, The Photographer, and the Devil's Advocate playing bocce. I said, "Oh, how cute! They're old men now" and then, prompted by The Voice's urging, "Run!", zipped back inside. When I returned with a videocamera to document the evidence of their antiquity, they invited me to join in, so I did. Turns out it's a game that I could do quite well, especially when I perfected my "old lady" throw, which consisted of tossing the ball while grunting like an old lady trying to push herself out of a chair. 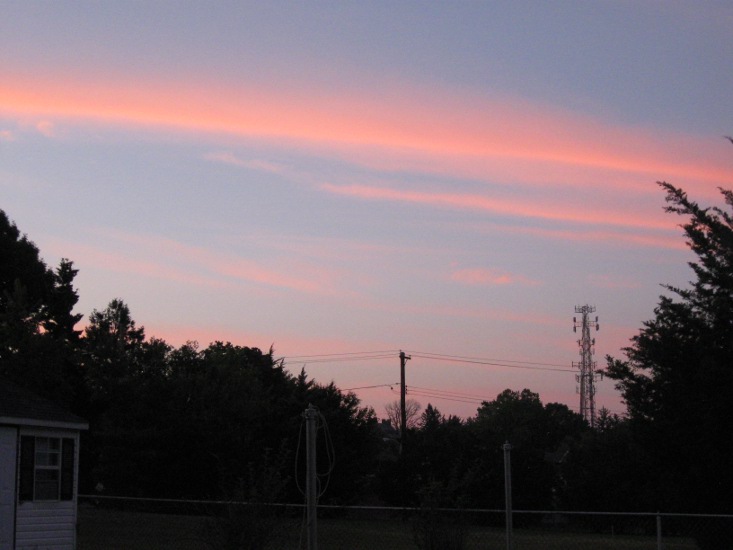 We had no fireworks, but there was a nice sunset. 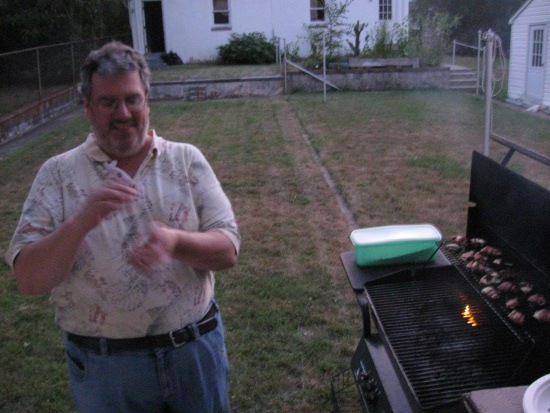 The Voice cooks his "heart attack specials" on the grill.
They had peppers, crab, cheese, and bacon.
I told him I wanted a photo in case the emergency room wanted to see it later.

We stayed much longer than we thought we might have, since Kung Fu Panda was basically just sleeping. When we left at about 10 p.m., I figured it was probably the latest we'll be staying at any parties for a while. It was great to see everyone in person and introduce them to the latest member of our family, even if he did sleep through most of the introductions.

Moral:
If you want a baby to sleep, keep him awake the previous day.