This is my home-game entry for Week 33 of

therealljidol. I invite you to read the many fine submissions and the other home-game entries. This week we were supposed to write on one of two topics: "Going All In" and "Fool Me Once." I went with "Going All In." My "partner,"

rivermirage, wrote about "Fool Me Once." 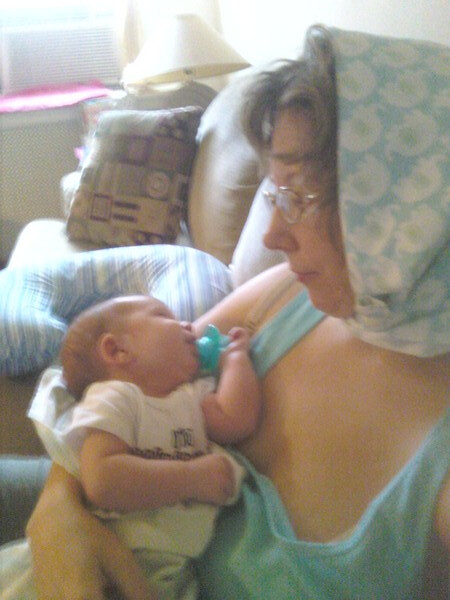 Me as a babushka, holding KFP

Even in my dreams, my month-old baby, Kung Fu Panda, follows me. Having one of my "fear of heights" dreams this week, where I navigate increasingly precarious stairs, I was holding him. Oddly enough, my usual fear disappeared, as I steadied myself for KFP's sake. For him, I had to be strong.

I have awoken from dreams of carrying my baby, cradling air. At first, I'd feel shock at my dissolved baby, until I'd remember he was safely slumbering in his crib. I'd sneak into the other room, push open the door quietly, and steal a look at his peaceful face. He is solid; he is sweet; he is real.

My waking hours are counterpointed by his needs: feeding him, changing him, holding him and soothing him. Any more, as I follow through on Otakon Press Relations business, or do my afternoon transcription assignment, I either work one-handed while cradling or feeding Kung Fu Panda, or I work from a laptop on a tray table, with KFP cuddling in my lap or against my chest. He is aptly nicknamed: eschewing the two different slings we have acquired, he prefers to be held in my arms, just like a baby panda is held in his mother's paw.

My husband, The Gryphon, joked that one day, he'll be 6 feet tall, weigh 180 pounds, and insist on taking a nap in his mommy's lap.

Eating, for me, is often on the fly or one-handed. I squeeze in household chores while he naps (when I am not also napping). Regular tasks, such as writing this home-game entry, sometimes must wait until much later than I would like, and not only to cope with his cry-inducing physical needs. Sometimes, we spend long minutes staring into each other's eyes in wonder, or I follow his eyes to the wall or the window and talk to him softly about what he might be seeing.

I see everything differently now. While watching a bride throw a fit on Bridezillas, as her face turned red and she rocked and screamed, I thought, "Aww! She needs to be swaddled." When a dancer performed a solo on So You Think You Can Dance, throwing back his arms in jerky movements, I thought of the startle reflex, where babies arch their backs and throw out their arms in sleep.

The other day, while peering into my sleeping baby's crib, I suddenly understood Terms of Endearment, which I'd watched earlier this year. Before, I saw it from the daughter's viewpoint, seeing the mother as well-meaning but intrusive. Now, as I found myself living out a scene from the beginning of the movie -- checking on a sleeping babe -- I felt everything the mother must have felt: wanting only to protect her daughter, and suffering the hardship of being pushed away.

When My College Roommate found out I was pregnant, she predicted that I would discover love like I had never known. At the time, I thought that she was exaggerating, but now I understand. My love for my Kung Fu Panda is deep-rooted, primal. He is part of me, part of The Gryphon, and yet his own soul. Mysterious. Special. Wondrous. I will savor these days.


Moral:
To the mother of a newborn, the world shrinks to the size of her baby.