The miserably hot weather has broken enough that I could finally do something I hadn't done for the past month: take our doggie, Una, for a walk. Of course, with our newborn, Kung Fu Panda, involved, it was a bit more complicated. 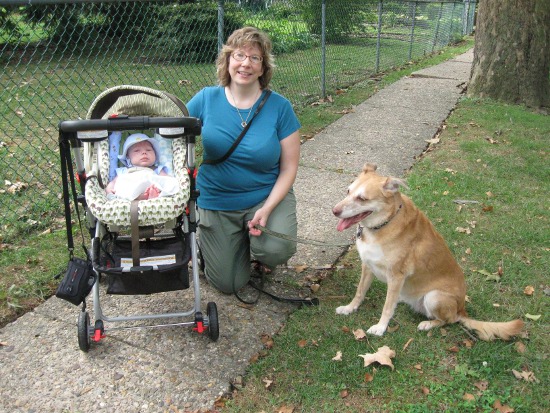 I take our Kung Fu Panda for his first walk around the neighborhood, with Una.

All through my pregnancy, I had continued to take regular dog walks, although the distance had shrunk as my belly had grown. It had always been my plan to maintain this daily habit, with the help of either a baby carrier or a stroller. The baby carrier was my initial plan, until I thought about how difficult it would be to lean down to collect any of Una's leavings. So the stroller it would be.

The first couple of weeks, I was still recovering from giving birth. Pain, combined with edema in my feet and legs, made the prospect of wincing around the neighborhood very unattractive. Not to mention, Kung Fu Panda was still in the most vulnerable period because of his developing immune system, and we only took him out of the house for doctor visits.

In the third week, I had just recommenced my transcription job, trying to juggle my telecommuting work with baby care and household tasks. I was lucky I managed to balance all of that, without adding a daily walk, as well. And then, as the fourth week began, the weather turned against us. In the Philadelphia area, we suffered from 100-degree days with a dangerous heat index. It would have been foolish enough to walk an aging dog, let alone a newborn baby.

Thanks to rain over the past few days, however, the air temperature has dropped to a normal summer level. So this morning, at 9 a.m., I decided to give it a go. It took a little creativity, since I could not simply wheel Kung Fu Panda down our front steps. Instead, I made three trips: tying Una outside, then putting the stroller on the sidewalk, and finally, bringing KFP out in his car seat and snapping it into the stroller frame (an ingenious product from Graco that makes a stroller out of a car seat and a simple frame).

Una initially wanted to lead the pack, but I found this too difficult to manage, so I had her walk beside me instead. She readily followed my lead, all the while smiling a big doggie smile. Poor Una has waited a long time for her daily walks to resume. Except for two weekend trips to the farmer's market with my husband, The Gryphon, she has had to make do with bathroom breaks on our very small lawn. She was eager to revisit the neighborhood and sample the smells that had accumulated in the past month.

Wearing a sun hat his grandfather gave him, Kung Fu Panda soon fell asleep in the moving stroller. The temperature was mild enough that I went a little further than I'd planned, for a total of about 25 minutes. Una behaved, and the stroller was lightweight and easy to manage, either with one hand or two.

I ran into a neighbor who had befriended me years ago when his dog was still alive. He readily agreed to take a photo of the three of us (I had intended to at least get one with KFP and Una), and then he regaled me with stories about his next-door neighbor's many cats until KFP started to fuss and I excused myself.

Una clearly enjoyed the walk, and I was happy to get some exercise other than carrying a 10-pound baby up and down stairs. While the first 30 pounds of pregnancy weight melted off easily, I've been holding steady for a couple weeks and would like to lose the last 30 pounds (or so).

In his stroller, Kung Fu Panda seemed to enjoy himself, as well. Pushing him along, I was conscious of the many things he was experiencing as he slumbered: patches of sunlight and shade, the smell of honeysuckle, a refreshing breeze, the shoosh of wind through trees, the distant barking of dogs and calls of children, as the stroller bounced over uneven pavement. The first of what I hope will be many opportunities to explore the world together.