Friday at Otakon, my day began bright and early with a live TV remote outside the BCC.

The Guest Handler had arranged a series of three live remote broadcasts by the local FOX station, WBFF. In the first one, they were supposed to interview some of the cosplayers waiting outside at 6 a.m. Otakon Press Relations staffer The News Producer was handling it, along with The Guest Handler. As it turned out, the station hadn't sent a reporter, so a staffer I'll call Dr. Who agreed to go on camera and talk to the anchors. The News Producer texted me at about 5:45 a.m. to get some talking points. As it turned out, I was already up, because Kung Fu Panda had awoken me at 5:30 to nurse.

The second remote was supposed to be an interview with some voice actors, but I learned they had not been able to make it (probably because some of them had flight delays that didn't bring them into Baltimore until 3 a.m.). Instead, I believe they interviewed the president of Otakon, Hellbuny.

I met the Pottermaniac in the hotel lobby at 7:30 a.m. to walk over in time for the third remote, which would be with the band HOME MADE KAZOKU. The Pottermaniac was the musical guest liaison for Press Relations and would facilitate most of the interviews and press conferences for the musical acts over the weekend. I wanted to introduce her to her counterpart from Sony, who would be working with her.

When we arrived, The News Producer and The Guest Handler were conferring with the cameraman, and a contingent of Spec Ops staffers was providing extra security. As I said to The Pottermaniac, they were our Thin Black Line, serving as a buffer zone between the members and the band. 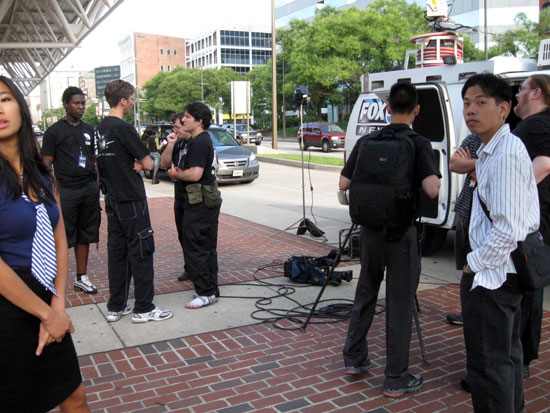 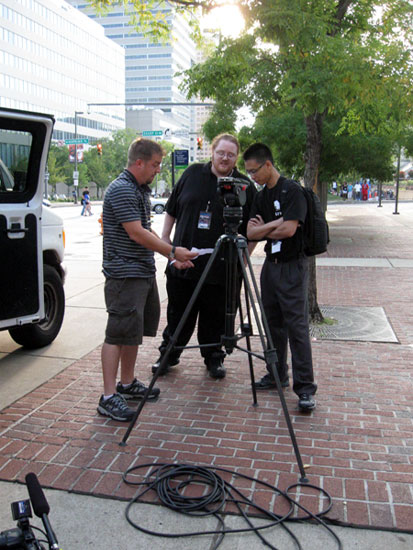 The cameraman from FOX discusses his plans with The Guest Handler and The News Producer. 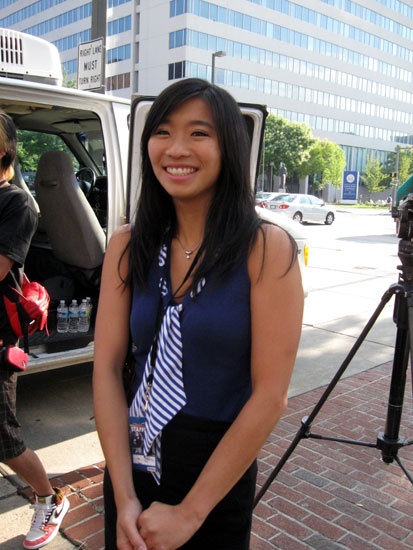 The Pottermaniac, ready for a busy day.

A small group of cosplayers had been selected to serve as a backdrop for the shoot. The cameraman went live with them a couple minutes before the band arrived, having them scream and cheer. 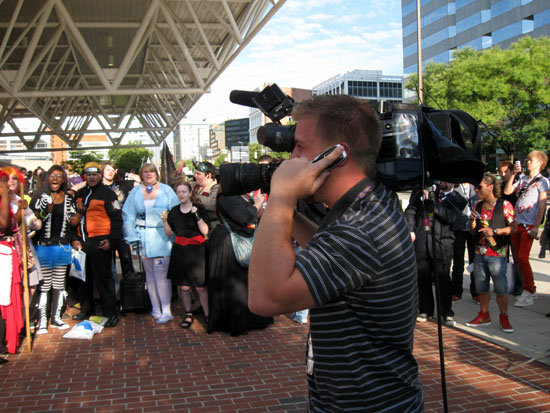 The cameraman gets video of the cosplayers in front of the BCC.

When the band arrived, the cameraman set up a shot with them in front of the cosplayers. One of the cosplayers got so emotional she was crying! We thought that was so sweet. Dr. Who acted as a go-between with the studio, listening to them and relaying the anchors' questions to the band. It was just a brief on-camera tease, but hopefully, it built up some additional interest. 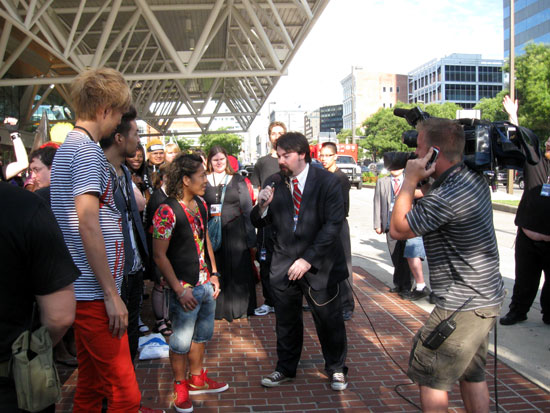 Dr. Who serves as the on-scene interviewer for the live remote featuring HMKU. 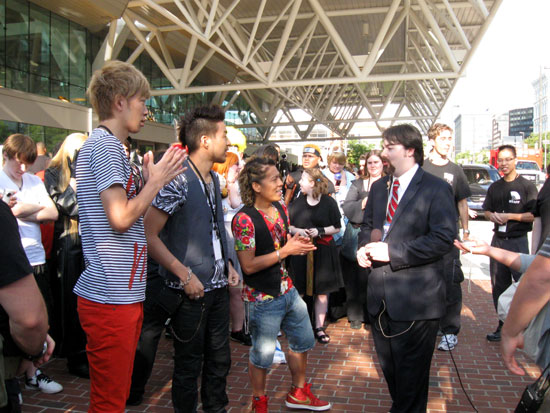 After the remote, Dr. Who chats with HOME MADE KAZOKU. 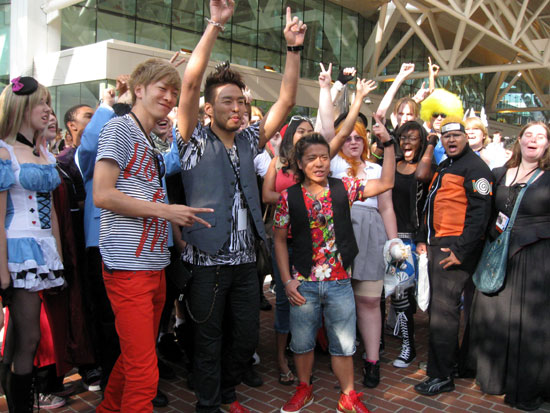 HOME MADE KAZOKU poses for a photo with fans.

Later in the day, another team from FOX came to the BCC and worked with Dr. Who to put together a package on the band for national distribution. They were one of several local TV crews who came by on Friday to work on stories about Otakon. I'll have to remember to ask for tapes of each of them.

Afterward, I introduced The Pottermaniac to the Sony representatives, and they made plans to meet up later for the first block of interviews with HMKU. I returned to Press Ops then with her and The News Producer, stopping along the way to photograph the registration line from the Hilton sky bridge. The line wrapped around the building. 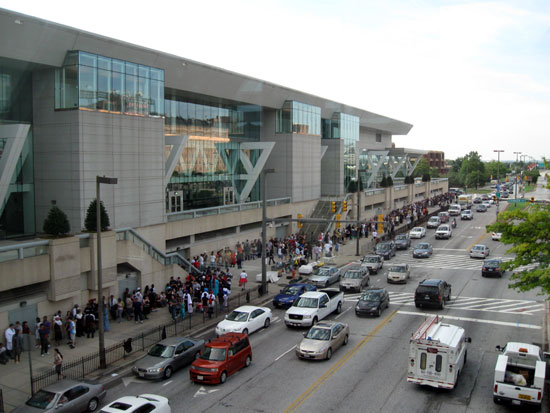 The line on Friday morning.

In the morning, I worked from Press Ops for several hours, but I soon discovered it was harder for me to take care of some of my tasks, especially those involving phone calls. This was because of the fact that the members of press all knew me from our interactions before Otakon and frequently wanted to ask me questions that could just as easily have been answered by others. If we'd had more computers, I could have hidden away in a corner and had others fielding those questions, but since I was only two seats away from the entrance, they came to me first. 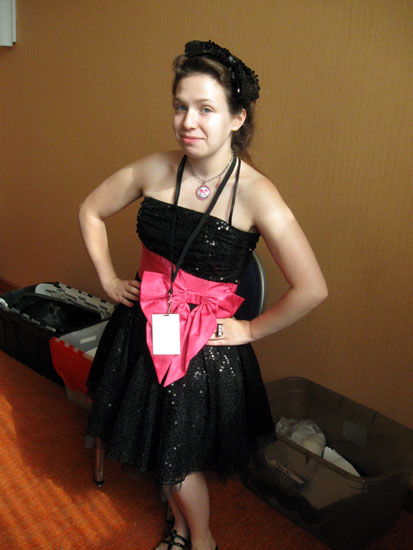 The Rock Chick shows off her sparkly dress.

Near lunchtime, some of the press needed an escort to the Dealers' Room, so I took them through the back hallways and picked up my lunch on the way back. 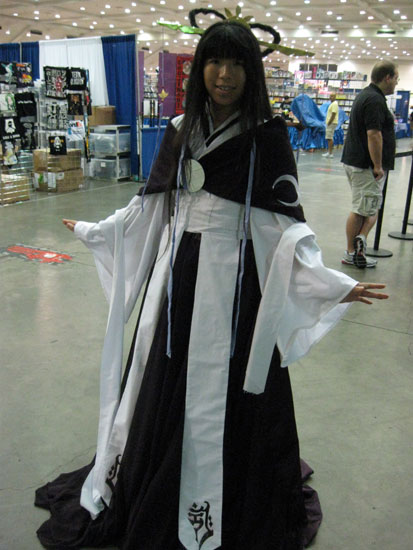 A member of the registered press for Otakon, cosplaying as her favorite character.

I worked from the room during the afternoon, giving my sister a chance to visit the aquaruim, using a VIP pass I'd secured for her. In late afternoon, I took Kung Fu panda to Press Ops, where he was remarkably calm in his Baby Bjorn. 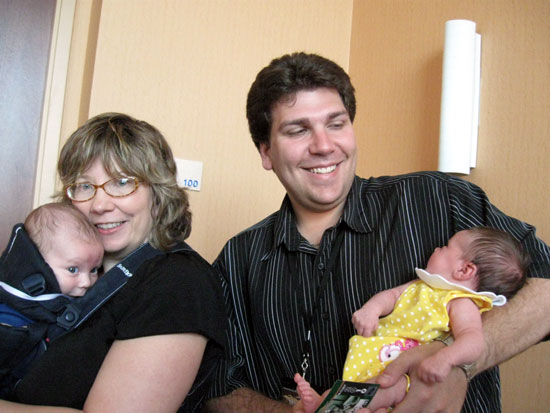 My staff, working hard, including The Rock Chick, Quack, and a new addition to our team. 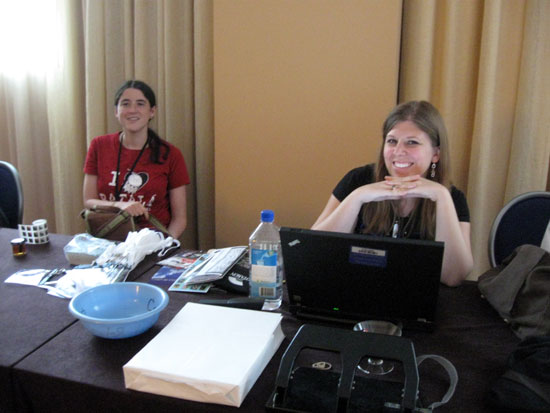 More of my staff present on Friday: The Water Ballerina and The Diplomat. 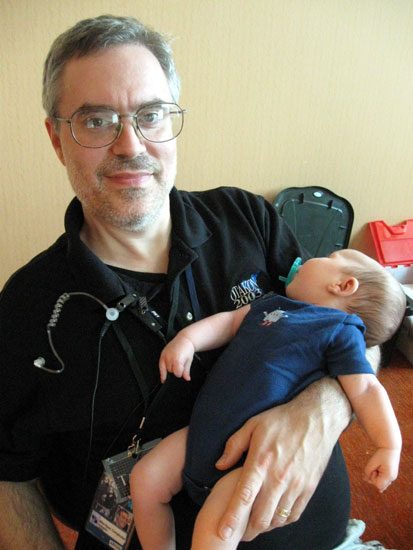 The Gryphon stopped by Press Ops to get some baby time in.

I ate some tomato rice soup, cooked in the crock pot, for dinner, but afterward was still sufficiently hungry to join The Water Ballerina for dinner. We asked DJ Rock along, who was attending Otakon and is considering joining staff next year. My sister also joined us. We ate at a nearby restaurant, close enough that we could zip over to Con ops while waiting and have a staff badge made for Kung Fu Panda, his first! We put his real name on it rather than the nickname so that one day he can show it off. 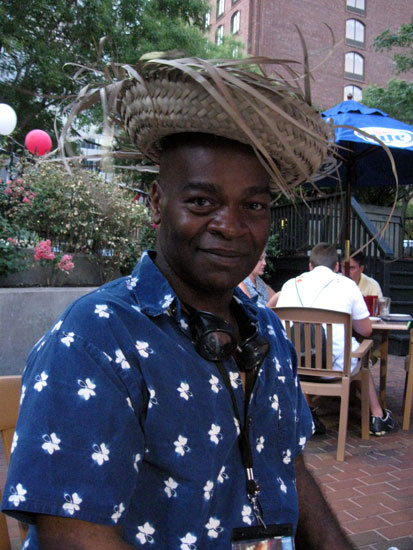 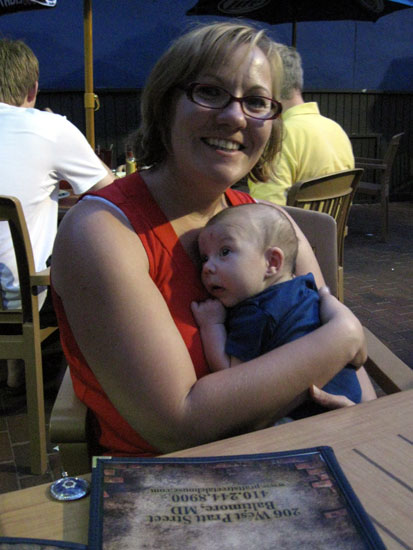 My sister with Kung Fu Panda.

For the rest of the evening, I did some work from my room and then tried to catch some Z's. Thankfully, Kung Fu Panda slept well in our hotel room. Even better than he does at home, for some strange reason.

Moral:
Gatekeepers are important when you're trying to run the show.