On our final day at Otakon, Sunday a week ago, my staff and I spent part of it shutting down Press Ops until next year. We also had a handful of press conferences and interviews to run, of course. 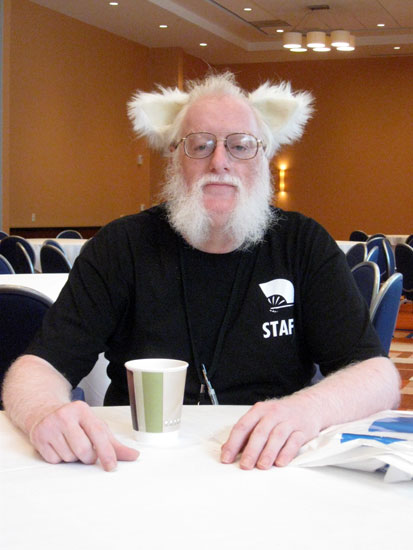 Before getting started, I stopped for coffee in the Hilton staff break room and
ran into a fellow staffer, sporting his famous ears.

After we got through the busiest part of the morning, and everyone was started on putting things away for next year, I made a quick trip down to The Alley to check out some art. I bought some from Alice Meichi Li, a friend of one of my Press Relations staffers. 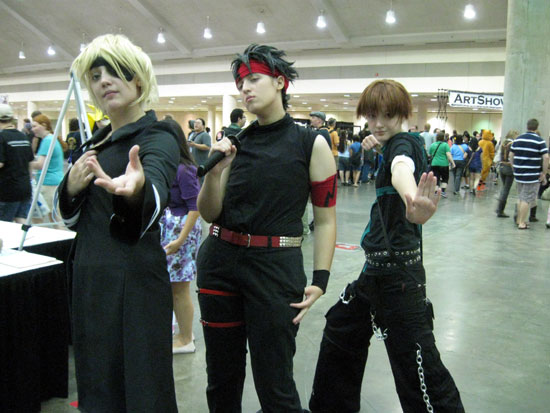 In The Alley, I encountered some cosplayers,
one of whom (left) was a member of the press from previous years.

I picked up my lunch from the staff room in the BCC and then returned to the hotel room, where my sister was packing up to head out. I collected Kung Fu Panda, who was content to be in his stroller, my sister having taken good care of him earlier in the day. By 1 p.m., I was downstairs again for an interview with Advanced Media Network, who was working on a behind-the-scenes story about Otakon. 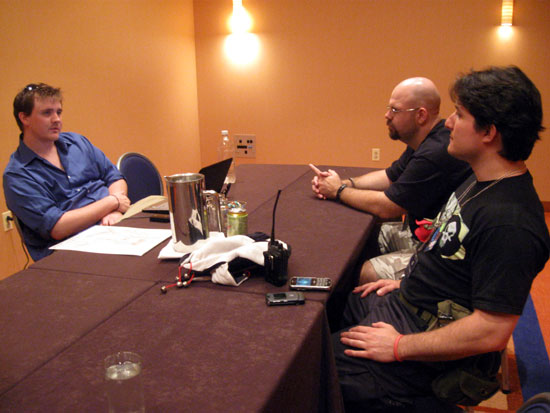 A reporter from Advanced Media Network interviews some members of staff. 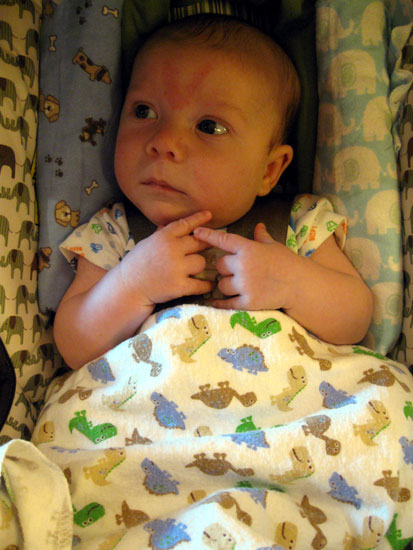 Kung Fu Panda plots to take over the world.

By the time I returned, my efficient team had pretty much completed packing up our gear, writing out a very complete list so that we knew what was in each of our boxes. This is very important when it comes time to plan for the next year. After making sure we had everything sent to the correct spots, we relaxed in the empty room and made plans. 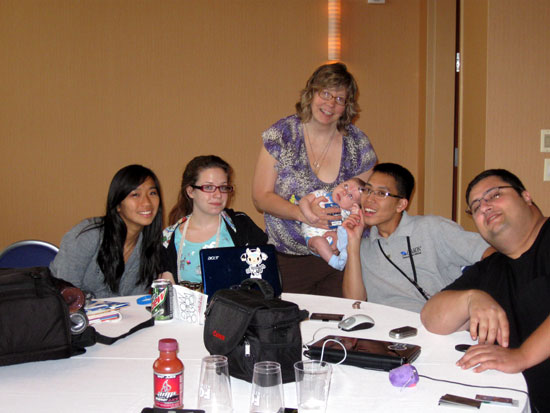 The remaining Press Ops staff on Sunday afternoon, from left The Pottermaniac,
The Rock Chick, me and KFP, The News Producer, and Loklore. 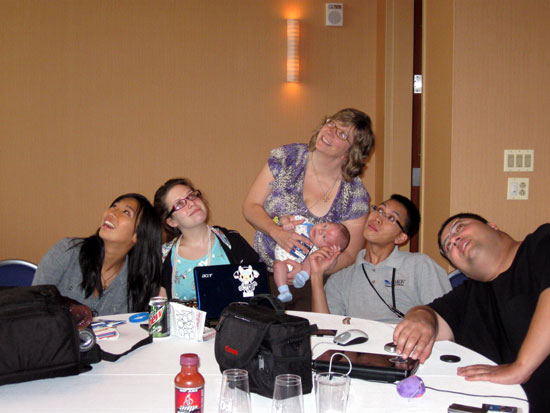 We all look up to try to figure out what Kung Fu Panda is gazing at.

We opted for a late lunch in the Inner Harbor. We tried to get into the Cheesecake Factory, but it was an extensive wait, so we ate at the sushi place, Edo, on the second floor. It was a perfect choice, and we split a sampler tray: my first sushi since I got pregnant with Kung Fu Panda! 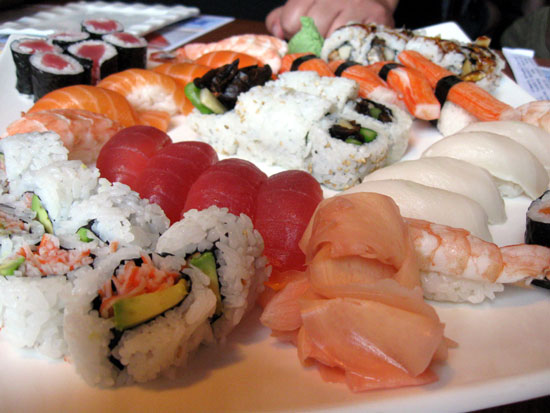 A savory selection of sushi. Yum!

Since there wasn't much time before the staff party, or Dead Dog, was about to start, we headed over, enjoying the warm evening breeze. 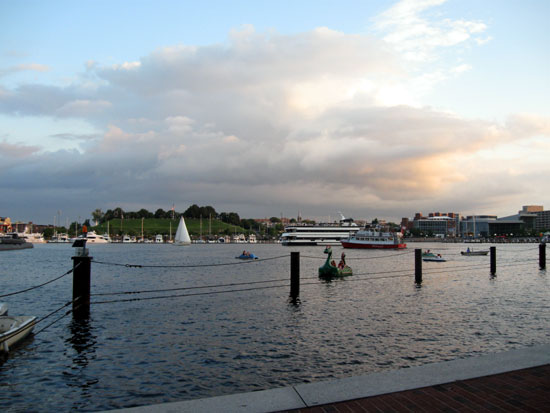 The harbor was beautiful in twilight on Sunday. 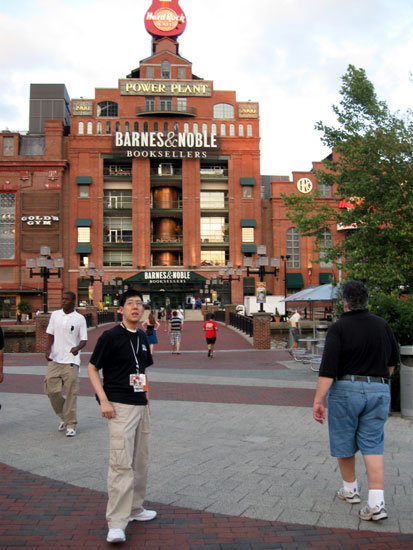 Staff members head for the Hard Rock Cafe, where this year's Dead Dog was held.

People were waiting around out front, and I thought they were waiting for the doors to open, but it turned out that wasn't the case. The head of Main Events saw us and escorted us to the front door. "Get this baby inside," he told the bouncers who were looking for our staff badges, required to enter.

The part was held at the Hard Rock Cafe for the first time, which was both a good and a bad place to hold it, as far as I was concerned. It was a cool location, with music and a bar for those interested in drinking. But the tables were spread out all over the restaurant, which made it feel less of a cohesive gathering. The main problem in our case, though, was that it was difficult to find a place to sit, which shocked me considering that we arrived only minutes after the doors had opened.

Exhausted and frustrated, I was close to tears until the head of Main Events told us he'd give up some seats at his table for us. But then, since The Gryphon had to walk around the party distributing the items staff members had left to have signed, and since the head of Main Events was busy helping to run Dead Dog, Kung Fu Panda and I were all by ourselves. I felt forgotten, ignored.

Fortunately, The Dormouse saw me and, rescuing me from my pool of tears, he invited me to join his table. One of these days I hope he understands how good of a friend he is and how much I appreciate the fact that he's always got my back.

I had a nice time hanging out with The Dormouse, The AMV Editor, The Plushie and her friend The Moogle, and The Mad Hatter, who was at the next table. He tried to amuse Kung Fu Panda by pulling out one of the electronic toys he carries around, but KFP showed no interest in the flashing lights. I'm sure that will be a different story several months from now, when he's more aware of his surroundings.

Many staff members came by to pay their respects to Kung Fu Panda, meeting him in person for the first time. I took him out of his stroller and carried him around in the Baby Bjorn, which he seemed to enjoy. He even fell asleep! 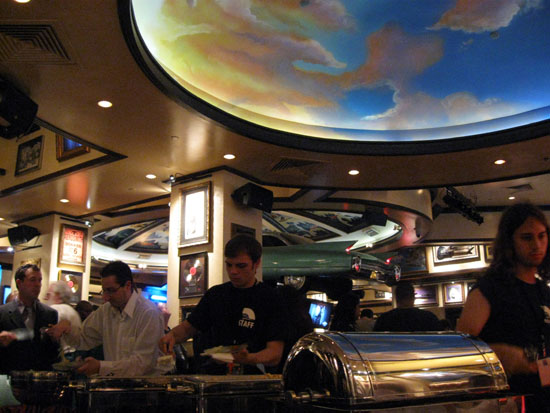 At the Hard Rock, there was a buffet for dinner for the hard-working staff. 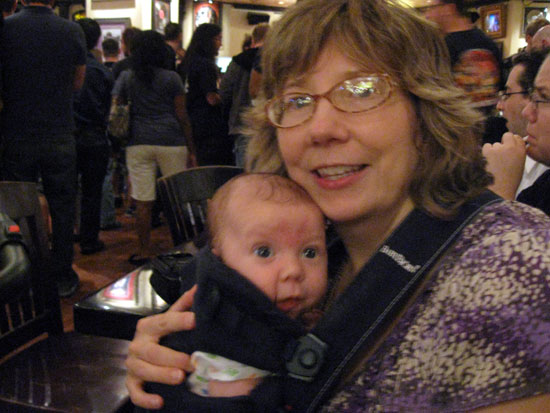 I carried Kung Fu Panda in a Baby Bjorn, which he seemed to enjoy, at Dead Dog. 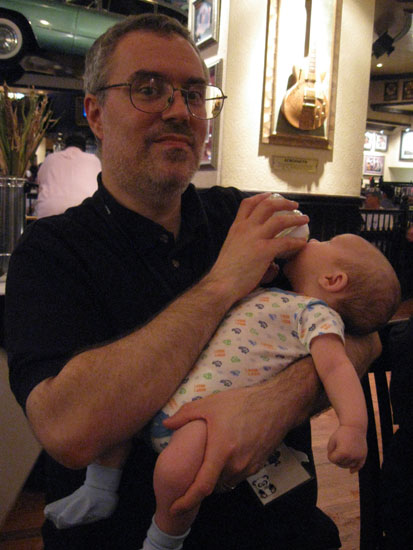 The Gryphon gives Kung Fu Panda a bottle at the Dead Dog party. 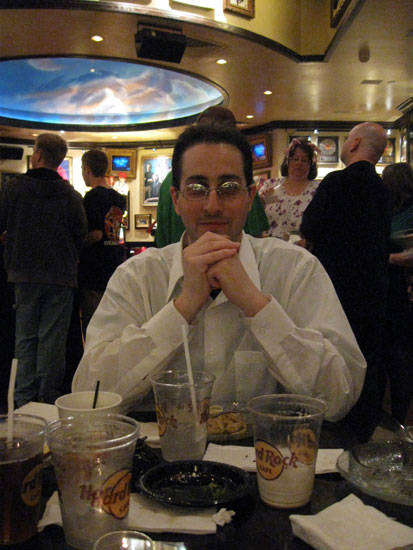 The AMV Editor at our table at Dead Dog in the Hard Rock Cafe. 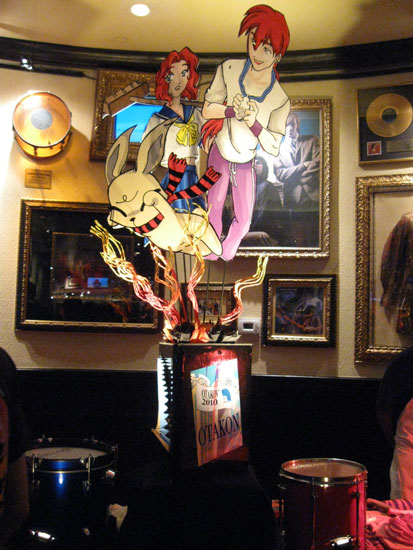 Otakon's mascots, Hiroku-chan and Hiroshi, presided over the buffet table at Dead Dog. 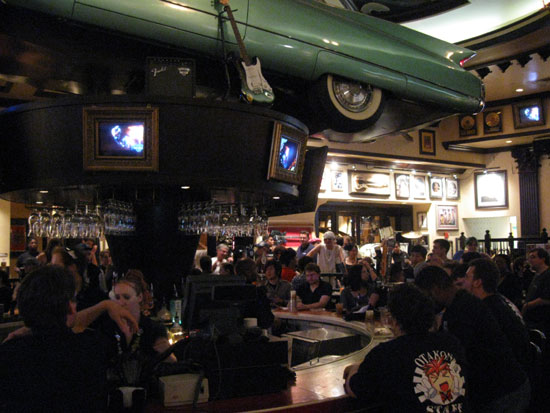 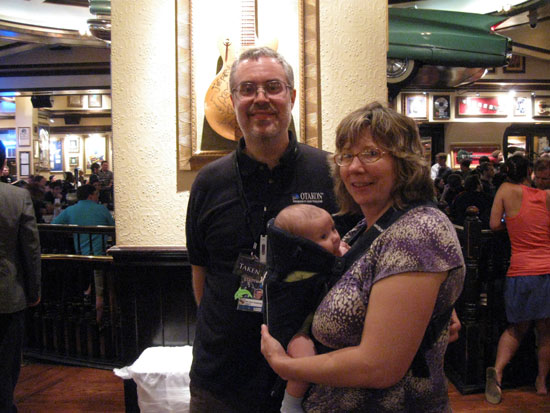 The Gryphon, Kung Fu Panda and I at the Hard Rock Cafe for the Otakon staff party, a.k.a. Dead Dog. 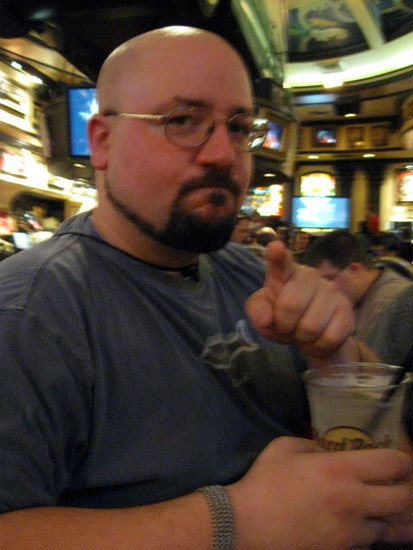 The Pirate at Dead Dog, now with 100 percent less hair!

We were about to leave anyway when the DJ started blasting Michael Jackson's "Thriller" so loud that Kung Fu Panda began to scream. Even with my hands over his ears, he was very upset. I rushed out of the building without saying good-night to anyone, as The Gryphon followed with the stroller and diaper bag.

Once we got away from the Hard Rock Cafe (which was blasting the song just as loud outside -- perhaps their way of clearing the room?) we were able to enjoy the nighttime cityscape on the way back to our hotel. 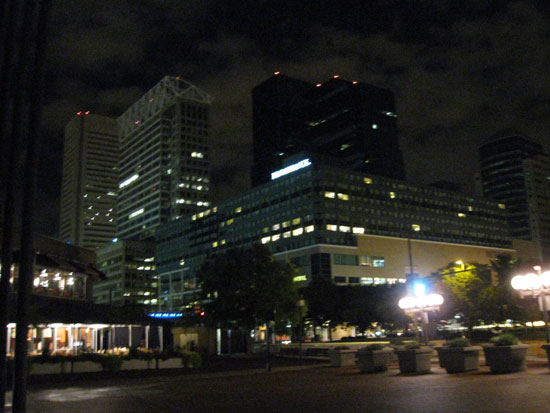 The skyline in the Inner Harbor as we returned to our hotel room after Dead Dog.

We stopped by the Battle Bridge (the hotel suite that serves as the operational center for Guest Relations) on our way back to the Hilton so that we could introduce Kung Fu Panda to The Hugger, who had wanted to meet him. There, we also saw the Press Relations interpreter and bid them both good-bye. 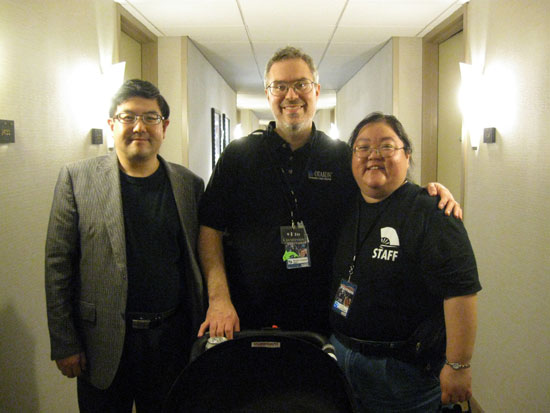 The Gryphom with The Hugger (right) and the Press Relations interpreter (left).

We didn't linger for quite as long on Monday as we ordinarily might have, staying only long enough for me to catch up with the News Producer and talk a bit about how this year went. Then we were on the road home. After surviving our first Otakon with Kung Fu Panda, The Gryphon and I felt proud but accomplished. Already, we're talking about what we want to do next year for the convention and how we'll balance our con work with the ever growing responsibilities of parenthood. 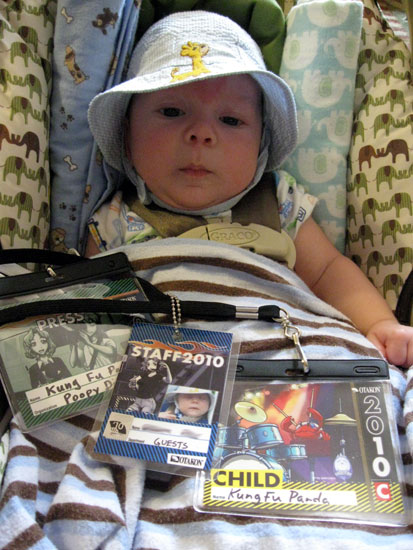 Kung Fu Panda with his press badge, staff badge and member badge from Otakon.
He never actually wore these, but we hung them from his stroller.

Moral:
Babies will party until the music gets too loud.